TECHNICAL NOTES
Single oak panel; the verso edges are bevelled. The panel has a splinter crack at the lower left corner and a chip in the centre of the lower edge. The panel also has a slight top-to-bottom convex warp. The paint film is in good condition, although the darker shadows are thin. There are some small spots of retouchings. The surface of the paint bears a fine craquelure. There is no previous recorded treatment.

The picture shows an evening scene with horsemen resting at an inn. The use of ‘PH W’ in monogram dates it to before 1646, when Wouwerman changed his signature to variants on ‘PHILS. W’ (‘PHILS’ in monogram). His earliest known work is dated 1639, so it would seem that DPG77 was produced between those dates, when he was in his early twenties. Wouwerman’s pictures from this period are strongly influenced both stylistically and in subject matter by the everyday scenes of Pieter van Laer, with features such as the use in the foreground of sombre earthy browns enlivened by areas of local colour, and the diagonal created by the silhouette of the inn and the road. Duparc suggested that DPG77 dates from 1642/3.15 The man lying down in the left foreground has some similarity to a figure by Cornelis Saftleven (1607–81) in a drawing and a painting of about the same time (Related works, nos 2a, 2b) [1-2].

If indeed this and DPG79 were sold in 1776 from the collection of Jean Pâris de Monmartel, Marquis de Brunoy (1690–1766), they were sold as pendants. In 1842 Mrs Jameson suggested that they were two pictures ‘sold from the collection of the Marquis de Brunoy, in 1749, for 216l’. Both date and price do not agree with the only recorded Brunoy sale, in 1776, but the pairing was echoed by later writers.16 In 1795 they appeared not as a pair in the sale of pictures owned by Desenfans, and the presence of the later type of signature, ‘PHILS . W’, on DPG79 seems to suggest that they were not created as such. They were inherited by Bourgeois in 1807.17 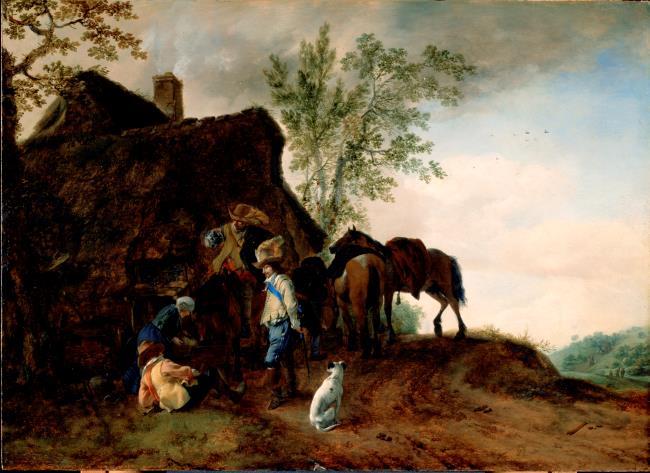 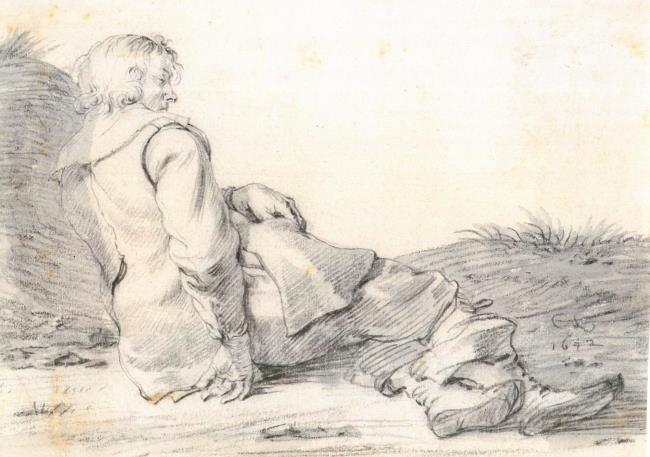 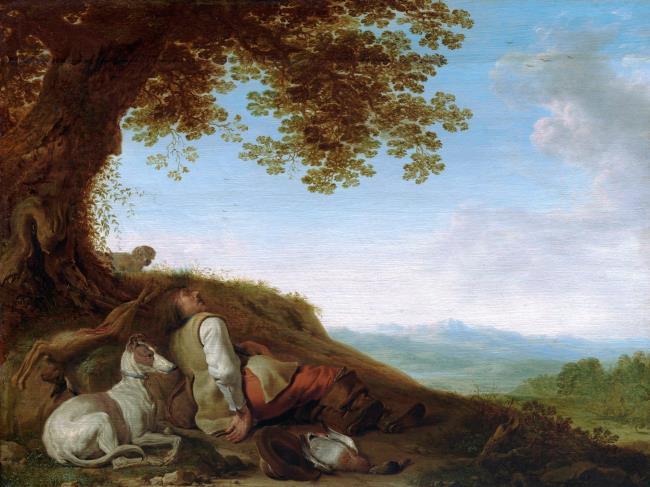 TECHNICAL NOTES
Single-member oak panel with horizontal grain. The ground preparation of the painting is buff-coloured, with light brown imprimatura. Strong diagonal brushstrokes are visible in the sky. The paint is generally in good condition. Under the frame rebate in the sky there are some light feathery retouchings, which may have blanched. This painting appears almost un-retouched in UV. Previous recorded treatment: 1952–3, Dr Hell.

DPG97 is an early work, similar to the Horseman at Rest in Leipzig (Related works, no. 1) [3], which is dated 1646. Frederik Duparc has suggested a date of c. 1647–9,29 which seems likely, given the signature style of ‘PHILS . W’ (‘PHILS’ in monogram), which came into use in 1646. The diagonal skyline and coarse figures are typical of Wouwerman’s work when he was heavily under the influence of Pieter van Laer. On the other hand, Richter & Sparkes and later Hofstede de Groot suggested that the depth of colouring shows the influence of Isaac van Ostade (1621–49), who was also living in Haarlem when Wouwerman painted this picture.

The Grey Horse in the Rijksmuseum, from about the same period, is similar in colouring and dimensions, and seems to depict the same horse with a red saddle, facing the other way (Related works, no. 2) [4].

According to Desenfans’ 1802 catalogue DPG97 was apparently acquired from a collector in Amsterdam. As it does not seem to appear in Dutch sale catalogues between 1790 and 1802 it is likely that its earlier provenance will continue to be obscure. 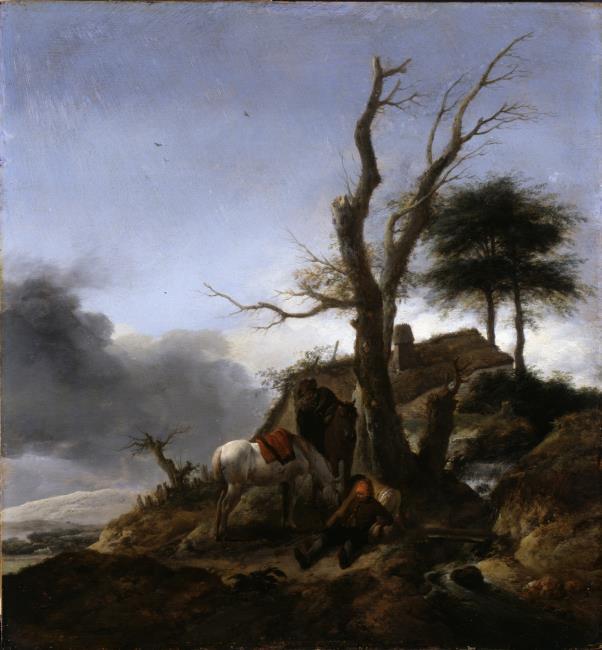 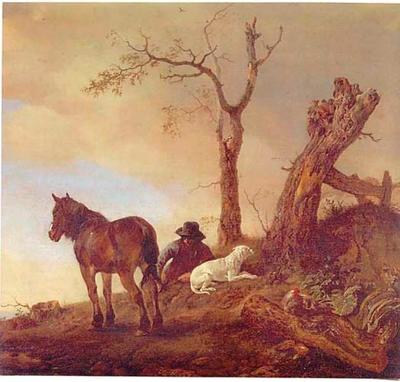 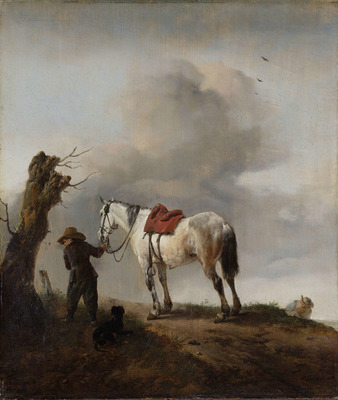 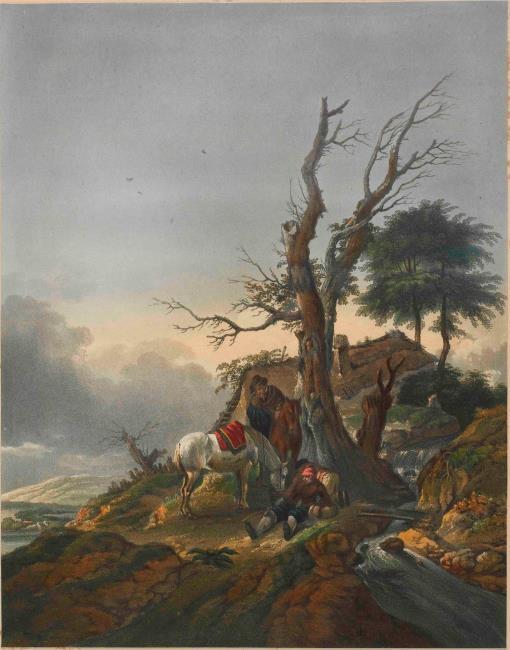 2 ‘DITTO [= Wouwermans]. Halt of Travellers at an Inn-door. A woman is feeding the horse of a dismounted cavalier, who is reclining on the ground; and another, in a buff vestment with a blue scarf, is talking to him; the imposing effect of both these pictures [the previous picture is DPG91], their delightful colouring and finish, are truly grateful to the eye of taste.’

7 ‘This picture is rendered very attractive by the simplicity and naturalness of the composition.’

8 ‘There is a tradition that one of the cavaliers in the present picture represents Charles II. If so, the picture was painted in 1656, when he was in exile in Belgium.’

9 A letter from J. P. Foster to Giles Waterfield, 27 June 1988 (DPG77 file), refers to a copy or version formerly in a private collection in Poland, but that has a different composition.

17 There is no picture exactly fitting the description of DPG79 in Desenfans’ Evening Mail inventory of 1790–91. However it is possible that another work (‘Wouvermans – A landscape with a variety of figures at the door of a cottage’) is DPG77. In any case the pictures were not presented in this inventory as a pair (if one of them or both can be found under the rather general descriptions).

18 Desenfans 1802, ii, pp. 83–84, no. 114: ‘A Landscape with Figures, View from Nature. The drawing of this picture was but a few years ago, in the possession of a merchant at Amsterdam, where a friend of our’s saw it. We see in this, detached from a warm, silvery and transparent sky, a small house covered with thatch, built on an eminence, and surrounded with trees; a gentleman is near, wrapped in a cloak, and mounted on a fine horse; his servant who rides a white one, upon which is a red saddle, is dismounted, and giving him to eat, out of a basket. On this side, is a man dressed in brown and blue, with a red bonnet on his head; he appears fatigued and reposes himself extended on the ground; a little farther, to the left [i.e. right], a cascade is seen, and on the second ground to the right [i.e. left], an old willow with but few leaves, and almost despoiled of it’s verdure. This picture, which is of a most precious enamel, and an uncommon force of colouring, will always rank among the finest productions of the master. On pannel.’ In the Desenfans catalogue and in other descriptions of the time left and right are not given as seen from the viewer, so in this description right is left and left is right.

19 ‘WOUWERMANS. Halt of Travellers. In the artist’s very best style.’

20 ‘Painted in the artist’s first manner. Collection of Noel Desenfans 1802 200 gs. Exhibited in the British Gallery, 1815. Now in the Dulwich Gallery.’

21 1858: ‘Dr. Waagen calls this “Le Colombier du Maréchal” [in pencil] he is wrong. He characterises it as “a picture of great fullness and depth of colour.” Signed with the genuine monogram of Philip Wouwermans. Descamps. Vol: ii p: 292. speaks of “Chez M d’Argenville (à Paris) un tableau connu sous le nom du Colombier” Is this it then? [in pencil] no. 137.’ 1859: ‘A picture in his earliest style. See Smith Cat: Rais: no 232.’

22 ‘Also an early work, of great fullness and depth of colour, painted under the influence of Isack van Ostade’.

24 ‘Because of its resemblance to the work of I. van Ostade this has been thought to be an early work.’ […] ‘both [Smith and HdG] probably wrongly, as exhibited at the British Institution in 1815’.

25 Schumacher thinks that Smith’s and HdG’s statements are based on the exhibition at the British Institution in 1815; the description however is very vague (see under EXHIBITIONS).