TECHNICAL NOTES
Oak panel with vertical grain. The verso edges are bevelled and there are four wax seals on the back. The largest of the seals reads ‘BOURGEOIS DES CIEUX PAR LA FOI’; another shows a horse and rider, surmounted by the same; the lowest seal has a Roman-style head on it; the fourth is blank. The paint film is in very good condition. Some vertical retouchings in the sky, which may be related to the panel grain, have blanched and become visible. Previous recorded treatment: 1952–3, Dr Hell.

Wouwerman’s interest in the everyday characters of this little scene recalls the early influence of Van Laer. However, Frederik Duparc pointed out that the beautiful silver greys balanced by warm pinks are those of his later work in the second half of the 1650s;16 Schumacher agreed, placing it ‘Around or shortly after 1655’.

Wouwerman returned again and again to scenes of common people gleaning a living among the sandhills of the northern Netherlands, depicting hay carts singly (Related works, no. 1) or in combination with a ship (Related works, no. 2), or as here one above the other, with the horses facing in opposite directions. It seems that Wouwerman influenced Johannes Lingelbach (1622–74) with this motif (Related works, nos 3a, 3b) [2].

Hofstede de Groot suggested that DPG182 is first documented in a sale at Zoeterwoude in 1784; the description and dimensions are indeed very similar, but Wouwerman played many variations on his motifs, so one cannot be completely sure of the identification. The picture first definitely appears in the collection of Desenfans, in 1804, before passing to Bourgeois in 1807. 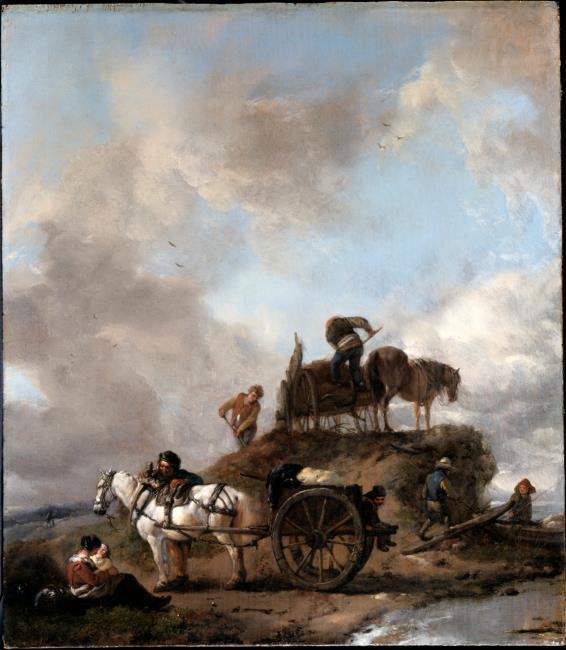 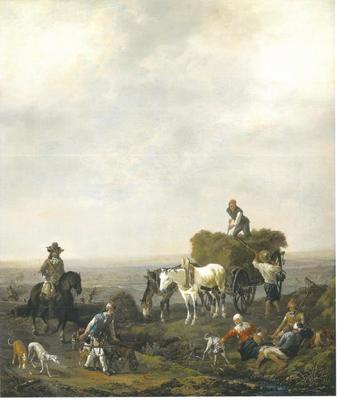 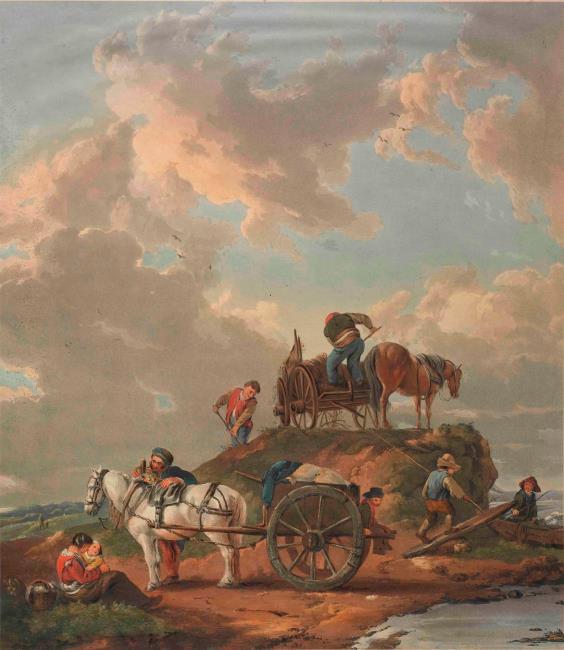 DPG92 – Courtyard with a Farrier shoeing a Horse

TECHNICAL NOTES
Plain-weave linen canvas consisting of several pieces. Glue-paste lined. The lining glue is thick and the canvases are not well adhered. The paint surface is in fairly poor condition: the darks are thinly painted and there is a pale craquelure over the paint surface, which in places is raised and sharp, and there is some cupping of the surface. The building and foreground bear some fine drying cracks. There is relatively little retouching on this image. There are no previous recorded treatments for this painting.

This busy scene, eloquently described by Desenfans in his 1802 catalogue (see note 20), contains fourteen figures in a rustic setting, the most important of which is a farrier shoeing a horse. Wouwerman produced many works on this theme throughout his career (e.g. Related works, no. 2), but no two are alike, indicating his endless invention. This is all the more surprising given the narrow range of his themes and the extremely large size of his œuvre. Most probably the 18th-century French printmaker Moyreau regarded the round tower structure as a dovecote: Le Colombier du Mareschal (‘The dovecote of the farrier’). Moyreau seems to have made a series with the maréchal or farrier as a theme: there were others with ‘La grote’ (sic), the grotto, ‘La famille’, the family, and ‘La boutique’, the shop of the farrier.34

Frederik Duparc has suggested a date of 1656 or slightly later for DPG92, which seems correct,35 for while the scene still shows the influence of Pieter van Laer in the placement of the small everyday figures in an outdoor ruinous architectural setting, the horizontal composition and pastel colours in the sky point towards the new style that he developed in the later 1650s and 1660s. Schumacher suggests ‘Around or shortly after 1655’. As his career progressed, Wouwerman’s tonalities lightened and his figures became more animated. At this point he is still concerned with rustic figures characteristic of the Bamboccianti.

DPG92 is documented in 1766 as part of the posthumous sale of the collection of Antoine-Joseph Dézallier d’Argenville (1680–1765), a significant figure in the history of art due to the publication in 1745–52 of his Abrégé de la vie des plus fameux peintres, a work aimed at helping collectors to recognize styles and periods, and the work of individual artists.36 Dézallier d’Argenville had an extensive art collection, consisting of about 6,000 drawings, and 73 of his paintings were auctioned in the year after his death. DPG92 was sold immediately after another Wouwerman, a winter scene, but their differing sizes militate against their being a pair.37 However both pictures were important enough to be included by Moyreau in his Œuvres as nos 26) [3] and 76. Viewed in the light of Dézallier d’Argenville’s theories, the inclusion of DPG92 in his collection underlines not only its characteristic style but also, given his connoisseur status, its exemplary qualities. 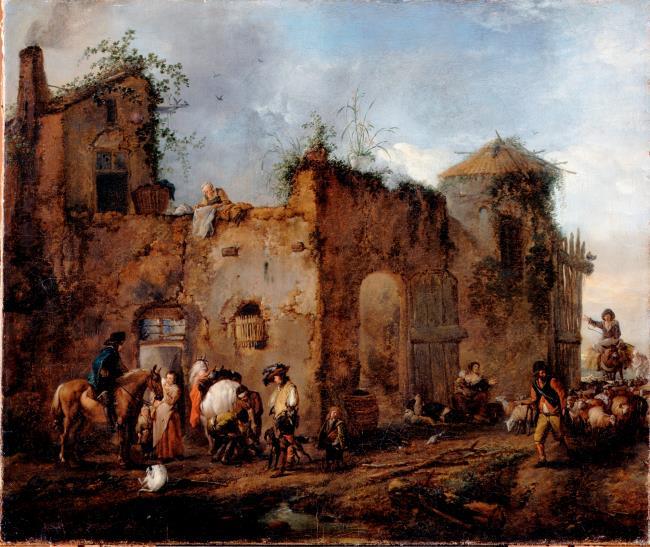 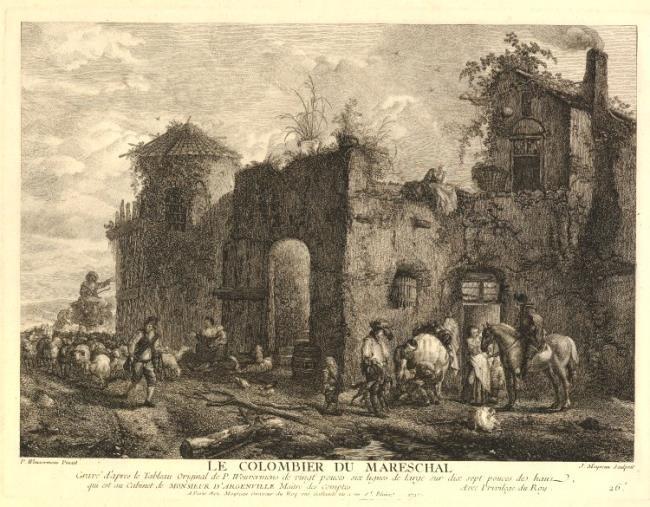 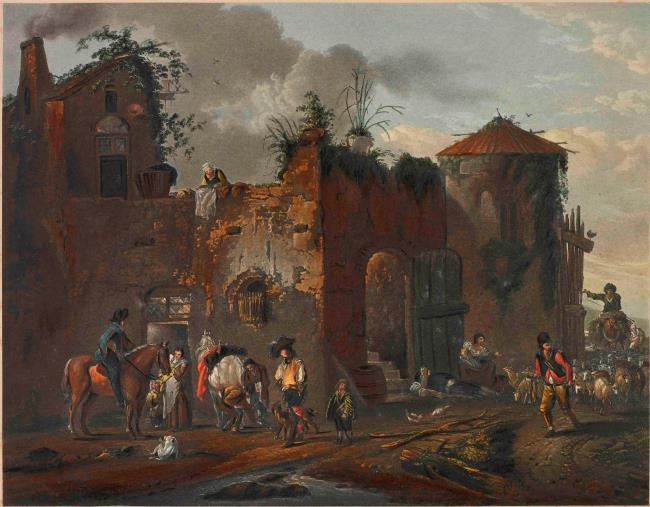 2 ‘WOUWERMANS. Landscape, with Horses, Carts and Figures. On a bank of manure a cart is being loaded away; another is at the foot of it, with a white horse, over which a man is talking to a woman with a child. The composition, grouping, colouring, drawing, &c. of this exquisite little picture are so excellent, that it may be fairly esteemed as one of the most valuable of the master.’

3 ‘Here are some delightful specimens of Wouvermans in this collection. Six of them hang nearly together, low on the left hand in the second room – Nos. 108, 113, 114, 115, 119, 120. One of them, containing a cart and a horse on a little elevation in the centre, is one of the loveliest gems of this master that I have ever seen, both in colouring and composition – but particularly the latter.’

4 ‘There are several capital pictures of horses, &c. by Wouvermans […] particularly the one with a hay-cart loading on the top of a rising ground. The composition is as striking and pleasing as the execution is delicate. There is immense knowledge and character in Wouverman’s horses – an ear, an eye turned round, a cropped tail, give you their history and thoughts – but from the want of a little arrangement, his figures look too often like spots on a dark ground.’

5 ‘This is a picture of estimable quality. Now in the Dulwich Gallery, and worth 250 gs.’

6 pp. 289–90: ‘A mind less stored than his own [Wouverman’s] with the principles both of linear and of aerial perspective, might have so placed the two carts that they could readily be distinguished as to their relative distances from the foreground, by their position on the line of the picture. He has not resorted to any such means; but with a boldness, entirely justified by his masterly success, has depended alone on his command of aerial perspective to afford the scale of such relative distances, and has placed one of the vehicles immediately, or nearly so, above the other. Had there been the slightest failure in the nice gradation of tints between these two objects, the intervening space, and the high bank of the river, the whole truth of the work would have been destroyed. As it is, however, it is impossible not to be struck with the charming fidelity to nature displayed in every part. The figures and the horses are drawn with life-like precision, while the mode of execution, its freedom, lightness, delicacy, and finish, qualities rarely combined, render [the picture] a work of high order in this particular class of painting.’

8 ‘A simple natural scene, without that artificial look which we often see in Wouvermans’ finest things, and exquisitely painted.’

20 Desenfans 1802, pp. 93–5, no. 118: ‘The other picture, its companion [NB: under no. 118 two pictures are described, but the present whereabouts of the other picture are unknown], is painted with the same delicacy, and is in all respects, of equal merit. It represents one of those old buildings raised formerly, and such as they now construct in villages, with pieces of brick and highway stone, to build at a small expence; these different materials cemented together form solid walls […] it is long, with two doors, and serves for two different families; near the first, is a farrier employed with his workmen, shoeing a beautiful white horse, upon the back of which the master, who has just alighted, has left a red cloak and valise; his dog is at his side, seeking to caress him, and behind a little page in livery, waiting with his hat in his hand. The farrier’s wife is on the threshold of the door, over which is a grated window; a child is by her side, and in her arms, another still at the breast; a gentleman, whose white dog is lying near him, is waiting till his friend’s horse is shod; and is conversing with her, while another woman is climbing over a low wall which is between the two houses, with a basket of linen to dry.

22 ‘This is no less beautiful in execution than the foregoing [no. 119 = DPG78]; and if not so perfect as a composition – not so “one and indivisible” – it is more various and animated. The figure of the cavalier who is waiting at the door of the shed while his horse is shod, is an exquisite example of Wouvermans’ finishing, and the air of it is elegance itself; while several other parts of the picture are touched with great freedom and spirit, considering the extremely diminutive scale on which the whole is painted. The two foregoing [nos 119 and 120 = DPG78 and 92] are perhaps the best pictures in the Collection by this most pleasing artist.’

24 ‘Monsieur Jules [the writer’s companion during the visit to DPG]; but he is absorbed over the wonderful colour and execution of a group of old buildings, in a picture (No. 137), by Wouvermans [DPG92]. No sooner have I joined him in admiration of this…’

26 1859: ‘This celebrated and exquisite picture was formerly in the Collection of M: D’Argenville at Paris. Descamps Vol: ii p: 292 alludes to it there as “un tableau connu sous le nom du Colombier”. It was sold in 1766 for 801 francs, and again in 1788 from the Collection of M: Herron of Brussel for 1800 francs. See Smith’s Catalogue Raisonné. No: 69. It has been engraved under this title by Moyreau. No: 26.’