Jan Wijnants is probably the son of the art dealer of the same name. He became a member of the Haarlem Guild in 1642 and is documented by 1653 in Rotterdam. Hofstede de Groot dated twelve of his pictures prior to that date, but Stechow mentions a picture dated 1654 as the earliest known to him.1 Wijnants seems to have begun painting at the end of the 1640s, often in collaboration with his brother-in-law Dirck Wijntrack (before 1625–78), noted for his pictures of fowl. By 1659 he was back in Haarlem, but by December 1660 he had moved to Amsterdam, where he remained for the rest of his life. Poor sales of his pictures meant that he also had to keep an inn.

Under the influence of Pieter de Molijn (1595–1661), Philips Wouwerman (1619–68), Jacob van Ruisdael (1628/9–82) and others, his chief subject matter is the landscapes and sand dunes near Haarlem. Later works frequently have a dominant blasted tree in the foreground. According to the 18th-century biographer Arnold Houbraken, Adriaen van de Velde (1636–72) was Wijnants’ pupil, and certainly painted the figures in his pictures on many occasions. Wijntrack and Johannes Lingelbach (1622–74) also occasionally provided staffage.

In the 18th century artists including Thomas Gainsborough (1727–88) in England and Jean Honoré Fragonard (1732–1806) in France were charmed by Wijnants’ pictures and sought to emulate them.2 Gainsborough is even said to have added figures to pictures by Wijnants.3

TECHNICAL NOTES
Single-member oak panel with horizontal grain, bevelled on the verso edges. The ground, and in some places the paint, is thinly applied. In the right half of the sky and the shadows of the hill, the wood grain shows through the paint layers. The thinly painted areas have been retouched and now appear slightly matt. There is some fairly minor abrasion in the dark clouds, the trees and bank. The varnish has yellowed slightly. Previous recorded treatment: 1952–3, Dr Hell. 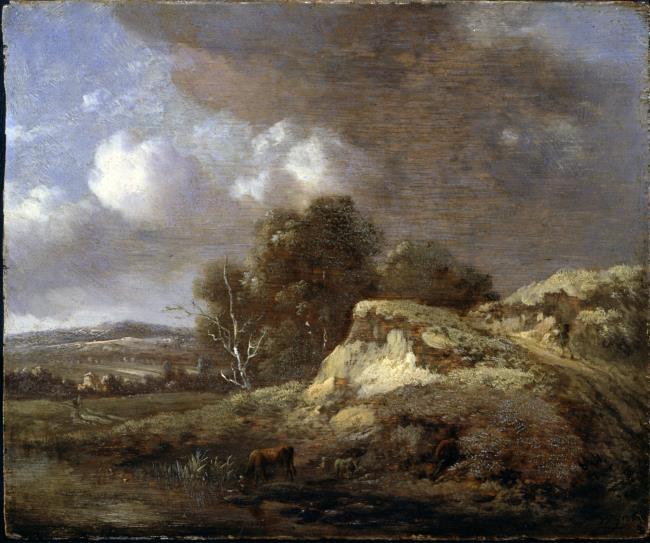 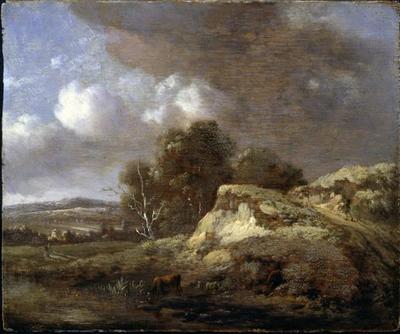 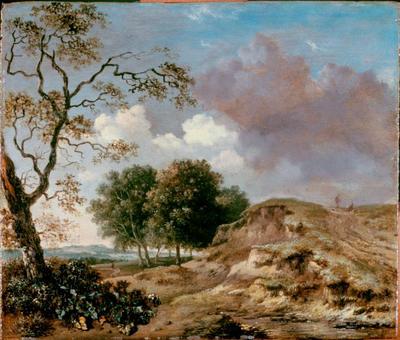 TECHNICAL NOTES
Single-member oak panel, bevelled on the verso edges. This work is more thickly painted than its pendant, DPG114, and consequently the panel grain is much less obvious. There are, however, fine horizontal cracks at the upper right edge, running with the wood grain. Fine drying craquelure can be observed in the plants under the left-hand tree. There is a tiny old retouching near the top edge, and the right-hand figure has been strengthened slightly. Previous recorded treatment: 1952–3, Dr Hell.

DPG114 shows a landscape of dunes, probably in the vicinity of Wijnants’ home city of Haarlem. At least since the auction in 1801, it and DPG117 have formed a pair. Although Eisele discusses them in different places, he considers them to be Gegenstücke, pendants. Wijnants probably did not intend them as a pair: the compositions do not mirror each other; the landscapes do not present a contrast, such as summer versus winter; and the dimensions are slightly different. However, according to Ian Dejardin it is also possible that the two paintings actually show exactly the same view, from slightly different angles, although the geology and the trees seem to be different.

In both pictures Wijnants uses the objects in the foreground – sand dunes, tree, water – to force the eye through a narrow path or gap that opens out to an expansive landscape beyond. The staffage is minimal: in DPG114 a cow drinking, a few other animals, and a figure with a burden on his back, and in DPG117 a distant figure on the road at the left and two people, one standing, one sitting, on the right. Laurie Harwood suggested that the pictures are early, from the end of the 1650s. Similar works cited by Eisele are undated (Related works, no. 1), or ascribed to the early 1660s (Related works, no. 2). They inspired the early landscapes of Gainsborough (Related works, no. 3) and, slightly later, Fragonard (Related works, no. 4).21

While in 1824 Patmore dismissed DPG114 and DPG117 as ‘far from ranking among his best’, all other writers have praised the pictures as characteristic examples of Wijnants’ œuvre. 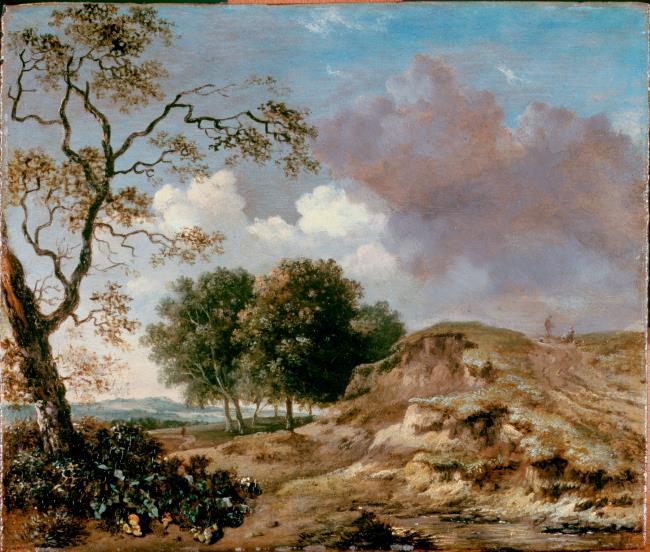 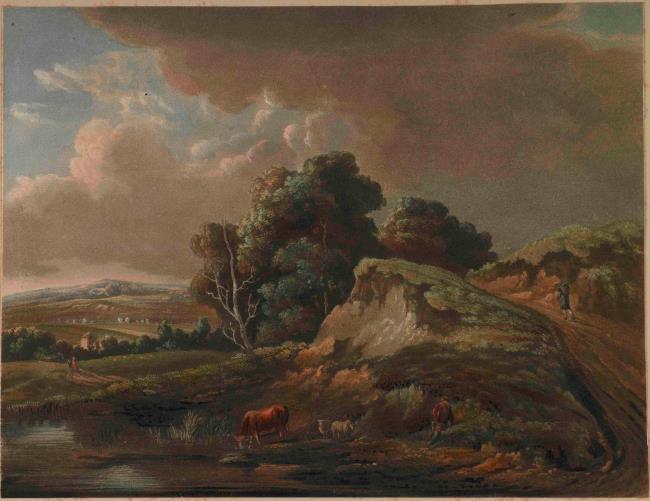 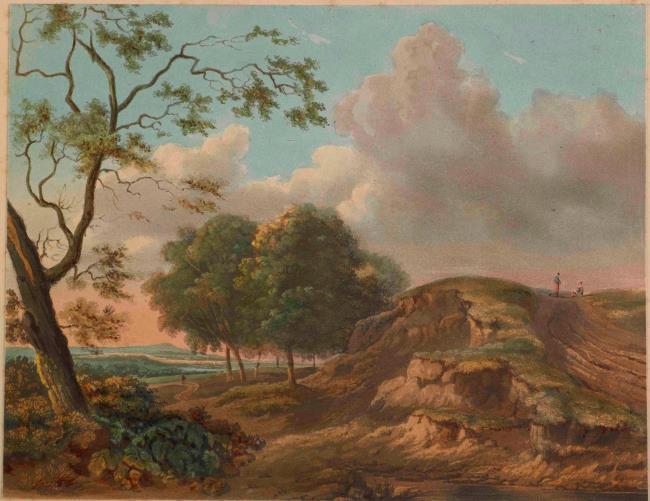 TECHNICAL NOTES
No technical information is available and no record of previous conservation treatments exists for this painting.

First catalogued as by Willem de Heusch (1625–92), the painting was attributed to Jan Wijnants by both Jeroen Giltaij and Marijke de Kinkelder.24 Eisele’s monograph does not include it, but features many pictures similar in composition, motifs (such as the intersecting trees in Related works, nos 1 and 2), and technique.

The picture came to Dulwich in 1956 as a loan from a Mr Mather of Beckenham and was gifted by him the following year. It was stolen on 13 April 1981 from the Master’s study at Dulwich College and has not been seen since. 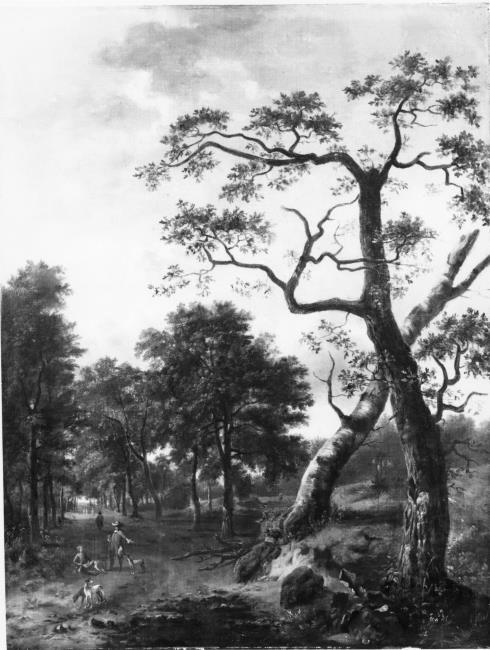 TECHNICAL NOTES
Plain-weave canvas. Off-white ground. The paint is lean, with little impasto. Glue-paste lined onto similar; the original tacking margins are absent. The lining process probably flattened the areas that are slightly more thickly painted, such as the highlights on the figures. Micro-crackle (with extensive small tenting) and flaking have occurred all over the surface, and there is a deformation in the canvas plane above the top stretcher bar. There are small losses around the edges that correspond to frame damage. Old retouchings are visible in the sky. There is some thinness in the shadows and foliage. The varnish is abraded and fairly yellowed. The ‘Wynants’ signature appears not to match the artist’s later style. Previous recorded treatment: 1988, examined, Courtauld Institute of Art, G. Egan; 1994, paint secured, keys secured, S. Plender and N. Ryder.

The picture shows a country lane threading through woods leading to a peasant house on an escarpment looking out over an extensive landscape with a church in the middle distance. While of undoubted quality, and resembling some later paintings by Wijnants (Related works, nos 1 and 2), its attribution has come to be questioned in recent years. While the illusion of depth has been created by overlapping planes, an effect also visible in DPG114 and DPG117, the picture lacks the lighting effects that one associates with Wijnants. It now seems most likely to have been produced by a 17th-century artist attempting to imitate Wijnants’ style. 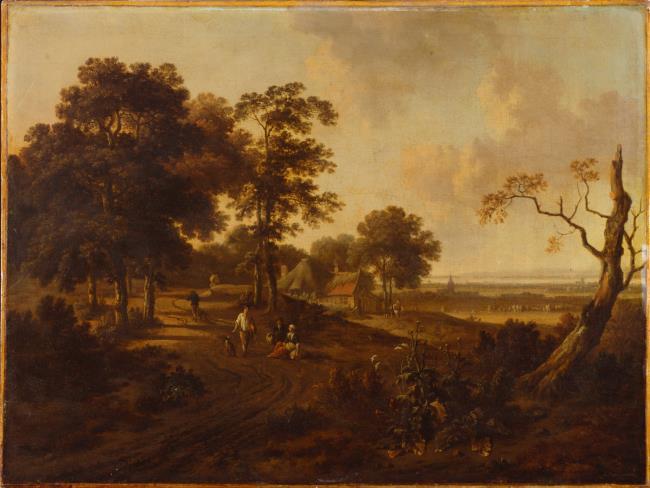 3 Foister 1997. However it has been suggested that the artist to whose pictures Gainsborough added figures was not Jan Wijnants but Francis Wynants, a contemporary with whom Gainsborough may have collaborated: Egerton 1998, p. 74.

5 If these four letters are to be read as ‘bank’, this most probably refers to DPG114, where there is a riverbank in the foreground, and not to DPG117.

7 ‘There are but two pictures by this artist in the present collection (6 and 16) – and those are far from ranking among his best.’

10 With no. 12 (DPG117), ‘Two companion pictures, fairly representing the characteristic style of the master.’

11 ‘fairly characteristic of the master’.

12 ‘A Landscape. The scene represents, on the left, a high and rugged sand-hill, with a clump of trees at its extremity, and on the right and front is an old tree standing amidst docks and other wild herbage.’ See also note 8 above, for no. 166 (DPG114).

25 The picture was offered to Dulwich by Professor C. D. Broad of Trinity College, Cambridge, in 1945, together with DPG614 (Studio of Teniers), DPG615 (Cornelis Pronk), and DPG617 (Johann Heinrich Roos). In his letter he said that the four paintings had been in his family for a long time. According to the PGC Minutes for 22 Nov. 1945, Sir Gerald Kelly was despatched to inspect the pictures, and they arrived at Dulwich the following year.