Sebastiaen Vrancx [1] is best known for his battle scenes. Karel van Mander said that Sebastiaen Vrancx studied with Adam van Noort (1557/62–1641), but there is no other evidence for that. Vrancx travelled to Italy c. 1596. After his return in 1600/1601 he became a free master in Antwerp. In 1610 he joined the Fraternity of SS. Peter and Paul, a group whose members included Peter Paul Rubens (1577–1640). That Rubens was interested in his work is shown by several studies that he made after Vrancx’s horsemen (Uffizi).1 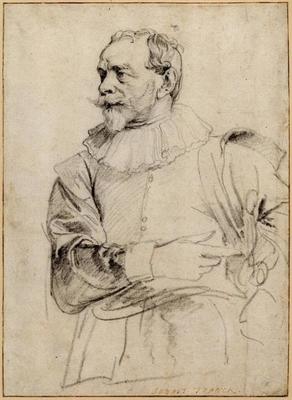 TECHNICAL NOTES
Two-member oak panel. Extensive woodworm damage to the panel has weakened it structurally and contributed to cracks and damage in the support. There are two major (mended) splits and the central join has come apart. The reverse of the panel bears two restraining battens, which are contributing to the structural problems. The paint film is worn and thin, allowing the panel grain to show through in areas of overcleaning and in the pale sky. Previous recorded treatment: 1870, ‘revived’, varnished; 1934, treated for woodworm; 1952–5, Dr Hell; mid-1980s(?), surface cleaned, varnished, retouched, woodworm damage treated, Area Museum Service for South Eastern England.

RELATED WORKS
According to M. C. de Kinkelder (RKD, 1997) there are at least seventeen versions of this composition, both as Sebastiaen Vrancx and as David Vinckboons I (1576–1631/3).2

DPG356 was bequeathed to Dulwich by William Cartwright, who thought it was by Jan Brueghel, the pioneer of this type of composition. In fact, the panel is a crude copy of one of Sebastiaen Vrancx’s most popular compositions, of which both vertical and horizontal versions exist. We can assume there was a ‘prime’ version, most probably in a horizontal format. The horizontal compositions seem to have the same figures, but with more space between them (see e.g. Related works, no. 2b). In one horizontal type the landscape is changed, with a chapel in the centre of the background (Related works, nos 3a, 3b). There exist at least seventeen versions of the subject, some of them attributed to Sebastiaen Vrancx (Related works, nos 1a–1c, 2a, 2b, 3a, 3b) and others to David Vinckboons I (Related works, nos 4a–4e) [3-4]. It seems most probable that the prime version was made by Vrancx (in collaboration with Vinckboons for the landscape?).

One of David Vinckboons’ versions is dated 1612 (Related works, no. 4d), which gives some indication of the period in which these pictures were made. Interestingly, in all the versions the seated soldier at the right is retained.

Unlike the compositions of his pupil Peter Snayers (see DPG347), Vrancx’s are relaxed and stately, frequently showing activities associated with war, but not the violence. The composition of The Battle of Arques, one of the battles of Henri IV of France that Rubens and Snayers painted for the French court in 1628–31, seems to have been inspired by the same image by Vrancx that formed the basis of DPG356 (Related works, no. 5) [5]. In the Munich picture Snayers used the high horizon recommended by Karel van Mander in his Schilderboeck (see also DPG347, Peter Snayers). 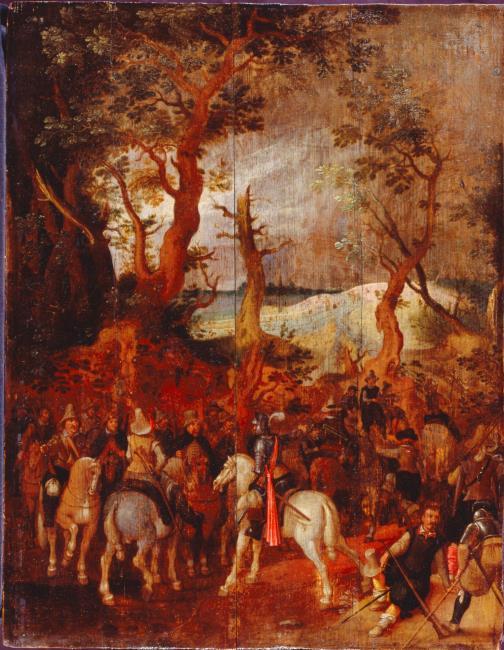 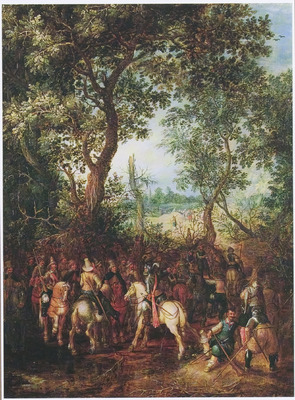 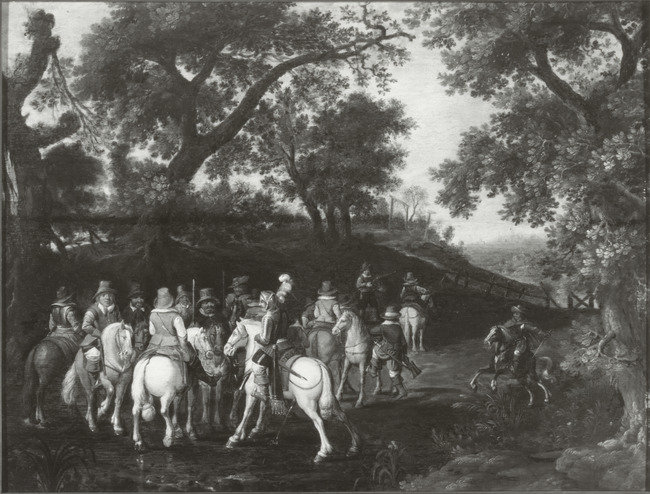 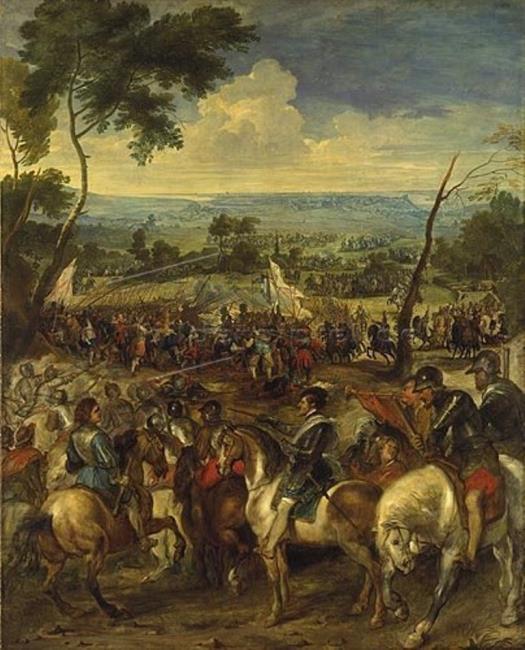 2 ‘In 1997, no less than 17 versions of this composition were known, either attributed to Vinckboons or Vrancx. The figure types and their poses are more in the style of Vrancx, yet the landscape wholly in Vinckboons’’s manner’, M. de Kinkelder, 2002–4, while describing Related works, no. 1a.