Maerten de Vos [1] mainly made religious works, and sometimes portraits historiés. Initially he seems to have been a Lutheran, and he worked for Protestant patrons in Germany, including Duke William of Brunswick-Luneburg, for whose chapel in Celle Castle he provided a Lutheran scheme of decoration c. 1569–72 (see Related works, no. 2). In the 1590s, however, he became one of the most important painters of altarpieces in Catholic Antwerp, effectively the predecessor of Peter Paul Rubens (1577–1640). He produced many designs for prints – these form the majority of some five hundred drawings of his that survive – and book illustrations. He was an eclectic artist, inspired by Italian painters including Paolo Veronese (1528–88), Jacopo Tintoretto (1518/19–94) and Michelangelo (1475–1564), and Northern artists including Pieter Aertsen (c. 1508–75), Frans Floris I (1515/20–70) and Michiel Coxie I (1497/1501–85).

His training probably started in the workshop of his father, the painter Pieter de Vos (1490–1566), who was born in Leiden. It has been suggested that Maerten was a pupil of Frans Floris, but there is no documentary evidence of that. The same is true of travels to Italy that he is reputed to have made in the 1550s or later, with or without Pieter Bruegel the Elder (1526/30–69). 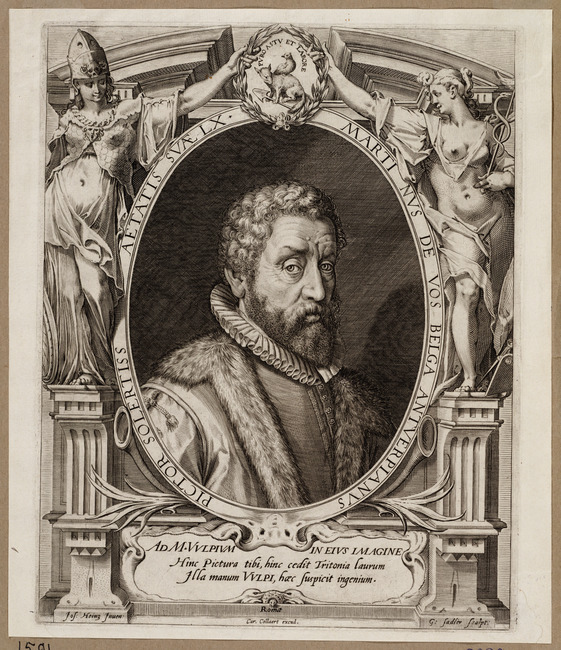 TECHNICAL NOTES
The panel is made of four vertical members and has a noticeable warp. There are numerous pentimenti. Some underdrawing is visible. The thinly painted areas are worn, notably the faces, and there are many old retouchings, especially on the panel joins. The varnish is a little discoloured. Previous recorded treatment: 1876, surface cleaned and varnished; 1952–68, with Dr Hell; 1986, join treated and panel tray made, National Maritime Museum; 1992, repaired open panel joins, N. Ryder. The condition is generally very good, but the heads of Christ, Mary Magdalen and John are seriously scratched. Mary’s head is fairly fine, with the tears intact. Xavier Bray suggested that the damage to the faces was caused by iconoclastic incidents.

The painting is a Crucifixion of a type common throughout the 16th century, especially in Flanders. It was formerly associated with a Crucifixion design initiated by Quentin Metsys, but Edwin Buijsen has suggested a later date,11 as Sparkes had done in 1876. The composition is very close to a print after Maerten de Vos by Jacob de Weert (1569–1605), dated 1590 (Related works, no. 1) [2].12 All the important elements are the same, or very similar: the dead Christ looking down, Mary looking down with crossed arms, John looking up (though not with clasped hands as in the print), Mary Magdalen kneeling to the right of the cross (grasping the cross rather than praying). The skull and the ointment jar are in slightly different places. The backgrounds, with a building with a pointed roof on the left and a large circular building to the left of the cross, are somewhat similar, although the Dulwich picture has far more detail: the kneeling man in front of a chapel, in the middle to the left, the horsemen between Mary and the cross, and the city depicted in great detail are small but important differences.

The figure of Christ is slightly smaller than the other main characters. The same is true in a Crucifixion in Antwerp (Related works, no. 3); but an important iconographical difference is that the figure of Christ there is depicted looking up – according to Zweite a Counter Reformation element: Christ looks to heaven, even after his death. Zweite argues that because in the Antwerp Crucifixion Christ is relatively small compared to Mary and John and there are some rather clumsy details, Maerten de Vos’s workshop played a significant role.13 That could be the case for DPG250 as well.

In other Crucifixions by Maerten de Vos or his workshop, such as the one auctioned in Amsterdam in 1989 (Related works, no. 4), many elements are stylistically very close (Christ, Mary Magdalen, the city in the background). The same can be said of the central panel of a triptych in Düsseldorf (Related works, no. 2b), which is a copy of a triptych signed Merthen de Vos and dated 1569 in the Lutheran chapel of Celle Castle (Related works, no. 2a). A close copy of this central panel is in Helsinki (Related works, no. 2c). The Düsseldorf copy shows the techniques of two different painters: the main figures are by an assistant, but some of the faces are more carefully worked up, possibly by De Vos himself. The latter feature is not seen in the Dulwich picture. The quality of the landscape in blue and gray, however, is remarkably high, so here too there may be two hands, but only one for the figures.

In the absence of dendrochronology, DPG250 can be roughly dated to the last quarter of the 16th century. 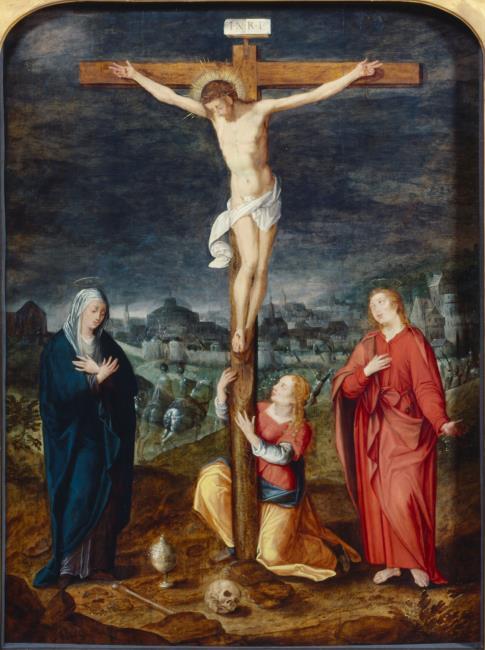 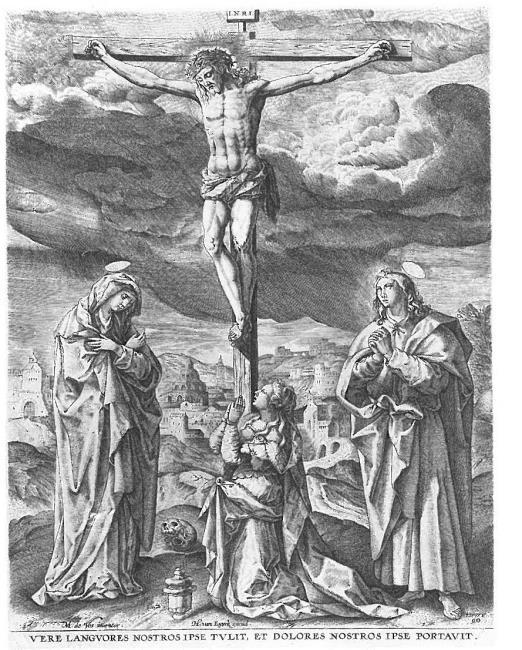 2 ‘The picture was believed to be by Hans Memling, but a critical inspection shows that it was probably painted considerably after the death of that great artist.’

3 ‘Painted by an unknown Flemish artist in the style of such masters as Franz Floris and others, who worked in the style of the Italian Renaissance in Flanders. This picture has erroneously been ascribed to Memlinc. It has been much over-painted.’

4 ‘This type of Crucifixion […] is traceable to the workshop of Quentin Metsys (d 1530). This picture was probably produced in Antwerp, under the influence of Metsys, about 1520/50. There is a smaller version of the subject, possibly the prototype, by Metsys in the National Gallery of Canada, Ottawa.’

5 ‘derives from a type established by Quentin Metsys […] but the picture does not seem to be the work of a close follower and probably dates from the late sixteenth century.’