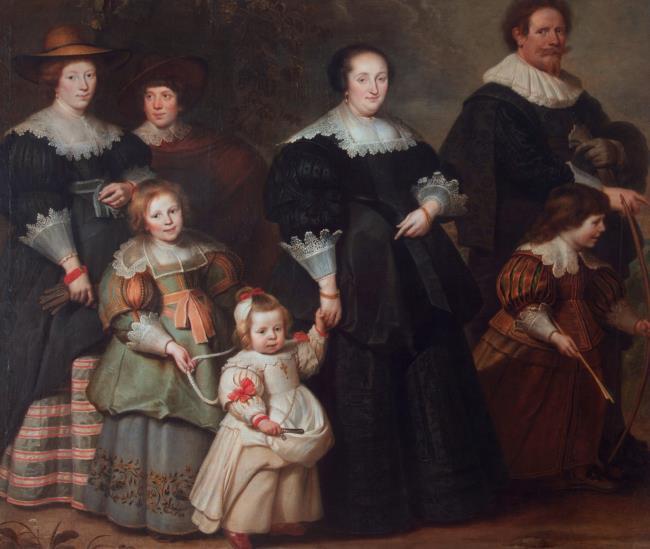 TECHNICAL NOTES
Fine plain-weave linen canvas with an original addition of coarser canvas stitched down the right-hand side of c. 5 cm. Glue-paste lined onto modern stretcher. The bottom tacking edge is missing and the top tacking margin was flattened onto the picture plane by the old (probably 18th-century) lining, extending the composition a little at the top. The paint surface has a noticeable craquelure all over and has suffered from past cupping and flaking. Retouching covers old losses along the canvas join at the top. Areas of the dark-brown and black costume have suffered abrasion from earlier cleaning. The paint layer has some old holes that have been repaired and the top edge has been filled and overpainted. Previous recorded treatment: 1923, cleaned, repaired and varnished, Reeve; 1952–3, with Dr Hell; 2003, relined and restretched, R. Watkiss; 2003, cleaned and restored, S. Plender. NB: 1877, frame repaired and regilt.

Although Denning in 1858 doubted both the attribution to Rubens and that the picture represented his mother, in the Dulwich catalogues DPG290 continued to be attributed to the school of Rubens, and to be said to depict his mother. It was consequently thought to have been painted at the beginning of the 17th century, before Rubens went to Italy; later he could not have depicted his mother. The identification of the sitter was doubted again in 1880, and changed to ‘an old lady’ in 1905, but it was only in 1980 that Murray, without explanation, suggested Cornelis de Vos, probably because of an attribution that was supposedly made by Michael Jaffé in 1967.19 DPG290 was not known to Katlijne Van der Stighelen when she published the catalogue raisonné of portraits by De Vos in 1990, but when she came to know it she immediately accepted the attribution and suggested that it was painted between 1630 and 1635.20 De Vos often used the same setting for his portraits (chair, curtain with tassel, and columns): a similar background, with columns on the left and a red curtain with tassel, appears in a portrait of a lady by De Vos in San Francisco (Related works, no. 3) [4].

This full-length life-size portrait of an elderly woman seated in an armchair is rather unusual. Such portraits were first made for Spanish and Austrian royalty, following models by Raphael (1483–1520) and Titian (c. 1488/90–1576). Members of the nobility came to be depicted in this way in regions including Mantua, Genoa and Great Britain, for instance Alathea Talbot, Countess of Arundel (1582–1654), c. 1618 (Related works, no. 5).21 However, between c. 1618 and c. 1640 burghers in Antwerp and Amsterdam, striving to enhance their status, commissioned similar portraits.22 Anthony van Dyck painted a seated Antwerp lady, probably of the Vinck/Vincque family of merchants, around 1619 (Related works, no. 6).

The lady in DPG290 is dressed in an old-fashioned way. She wears an elaborate ruff, a black widow's cap, and an embroidered black dress with a furred vlieger (a 16th-century pinafore dress) costume, which is very like the attire of Magdalena de Cuyper, also from Antwerp, in a portrait by Jordaens, c. 1635–6 (Related works, no. 4) [5]. In her left hand she holds a lace handkerchief and in her right a book, probably religious, her place marked by her index finger, no doubt referring to a pious life. The handkerchief, however, was a sign of wealth, in the Southern and Northern Netherlands23 and in England, as in the portrait of the Countess of Arundel (Related works, no. 5).

The best clue to the sitter’s identity is the arms behind her with a well and stripes. Bert Watteeuw of the Rubenianum drew attention to a monument in St George’s Church in Antwerp, dated 1559, with a coat of arms incorporating the same well and stripes (Related works, no. 1) [2]. The monument is dedicated by ‘Henricus’ and Alexander van der Goes to their parents, ‘Petrus’ van der Goes (1520–86) and his wife, Alexandrina Balbani (?–1605?).24 The quartered coat of arms in the background of DPG290 shows the same united arms of the Van der Goes families (golden well on saber) and Balbani (golden eagles on stripes of azure on silver). Later Watteeuw identified the sitter as Maria van der Goes (1555–1642), daughter of Peter van der Goes and Alexandrina Balbani. She married Jan della Faille the Younger (1542–1618). She became a widow in 1618, which explains her dress in the picture. It seems that her son Alexander I della Faille (1587–1653) owned this portrait at the time of his death.25

The Balbani were a family of merchants from Lucca who settled first in Bruges, then later in the 16th century in Antwerp. The Van der Goes family also had mercantile roots. They were not aristocratic families pur sang, but they were among the most successful and certainly the richest Antwerp merchant families, and were thus at the top of the patriarchiate, with aspirations to nobility that were fulfilled through marriages later in the 17th century.26

Sir George Scharf (1820–95), who in 1857 became Secretary of the National Portrait Gallery, and later its Director, on one of his many tours around the British Isles sketched some of the portraits in the Dulwich Gallery. In 1859 he drew two paintings that were thought to be by Rubens, DPG285 and DPG290 (Related works, no. 7) [6]. As was common opinion at the time, he thought that DPG290 was a picture Rubens painted before he went to Italy. Clearly Scharf did not like it very much, since he noted: ‘very poorly painted; rather weak; bright & crude’; it is not clear who the Mr. Brodering is (a collector?) with whose paintings he compares DPG290. 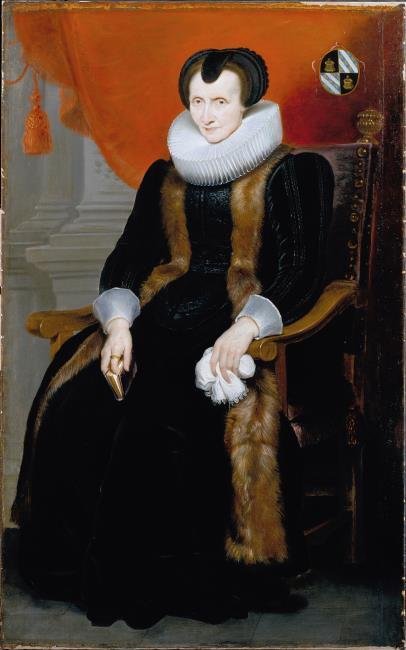 2
Coat of arms of the Van der Goes/Balbani family monument, 1559 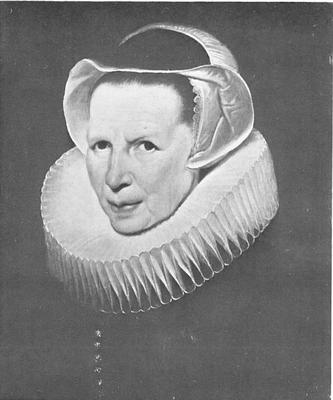 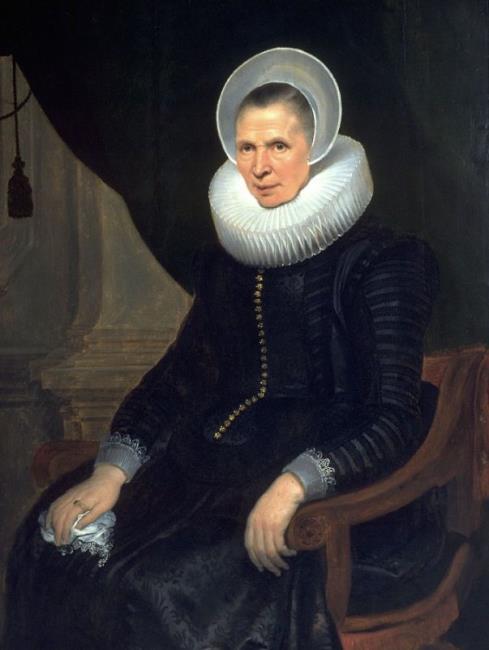 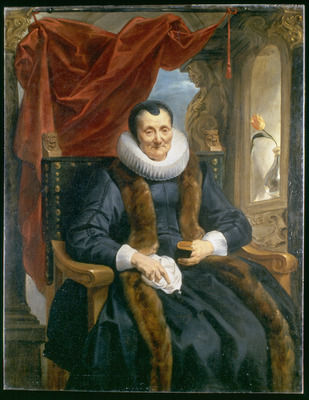 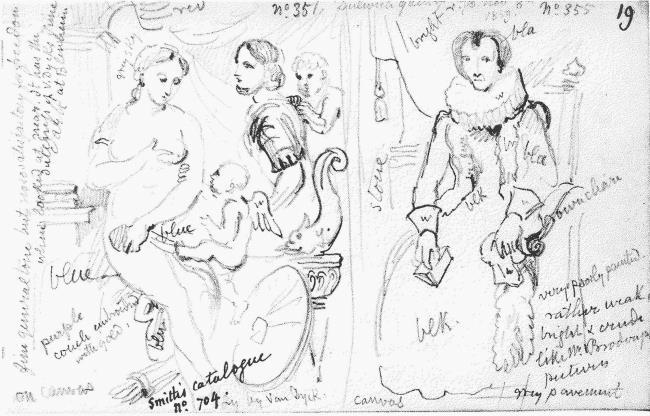 1 ‘See Duverger 1984–2009, vi, 1991, p. 406: Alexander I della Faille was the son of Maria van der Goes and Jan della Faille. Unfortunately the name of the artist is not mentioned, but in view of the heraldry and the dates, etc., it seems quite likely that this is DPG290.’ Information in an email from Bert Watteeuw (Rubenianum) to Ellinoor Bergvelt, 16 April 2018 (DPG290 file).

3 ‘Sir P. P. Rubens. Portrait of his Mother. In black drapery, ornamented with fur, and a ruff round her neck, holding a book in her right hand, and an embroidered handkerchief in her left, exhibiting a perfect specimen of the higher style of portrait, being correct, natural and unsophisticated; finished in every part, slovened in none, rich in its detail, and effective as a whole. The hands and face appear as vital as if painted with real flesh.’

4 ‘This fine old lady is the mother of the artist, and she looks like it – the mother of Sir Peter Paul Rubens! – for she is evidently prepared to claim all the honours belonging to the name of her illustrious son. […] but this lady really does feel (as she ought) that to be the mother of Rubens is honour enough.’

5 ‘P. P. Rubens. The venerable mother of the artist, seated in an arm chair; whole length figure. This must have been a splendid picture, so full of truth and nature, of noble and dignified expression and executed in his happiest manner; now however, it is unfortunately so obliterated, that regret for what it has been, is stronger than admiration of it as it now is.’

6 ‘If this portrait be from the life, it must have been painted before Rubens went to Italy in 1600, as his mother died during his absence (in 1608).’

7 ‘A fine portrait, though rather dry of execution, but the hands are exquisitely rendered.’

8 ‘And if modern portrait-painters will not have Holbein held up to them as an example – if they stigmatize the honest old German as too hard, too quaint, too prosaic – here is a very different picture, which they may equally take pattern by: here is a whole-length portrait of the “Mother of Rubens,” by Rubens, hanging close to the Holbein [DPG151, see Ingamells 2008, p. 125], painted on a totally different plan from it; and yet – as if to remind us of the necessity of cherishing a Catholic taste in art – exhibiting an equally admirable result. In this picture we see how far painting was improved after the time of Holbein; how, what it might lose in high-laboured finish and cautious fidelity of detail, it gained, and more than gained, in ease, grace, beauty, and harmony of finish and effect. How grand and dignified, yet how perfectly natural, is the old lady in this picture! how exquisitely true her calm, quiet smile, and her kindly honest eyes ! – how wonderfully drawn and painted are her hands! – you could grow her age, and her rank in life from them, without looking at her face at all!’

9 ‘Supposed to represent the mother of Rubens, but sufficient proofs of this are wanting. The execution is too simple, and not spirited enough for Rubens. To judge from the technique, the picture must have been painted long after 1600, the year in which Rubens saw his mother for the last time.’

10 ‘Dulwich Gallery was one of my haunts. There I observed that an early portrait of his mother by Rubens had surprisingly the characteristics of care and humility.’

11 Cook (p. 180) cites both Hunt 1905 (see the preceding note) and Bentley’s 1851 (with an anonymous author, see note 8), causing some confusion as there is no clear distinction between the two references. Ingamells (2008, p. 125) thought it was one reference written by (Holman-)Hunt in his autobiography, originally published in Bentley’s Miscellany 10 (1841), p. 351. Cook however cites an anonymous article of ten years later.

19 The source of this suggestion by Michael Jaffé is not clear; there is supposed to have been a letter from him, which is not in the file of DPG290.

22 Dudok van Heel 2002; see also Bikker 2018. In both publications the emphasis is on portraits of standing figures.

25 See note 1; according to Bert Watteeuw (see previous note) it would probably be possible to follow the picture in later family records.

26 Information about the two families in the email from Bert Watteeuw (2018) cited in notes 1 and 24.