Little is known of Thomas Wijck's [1] early life, and the date of birth proposed by Houbraken (c. 1616) is not supported by any surviving document.1 Presumably he trained in Haarlem. Possibly by 1640 he was in Rome, whence he travelled at least once to Naples. In 1642 he was back in Haarlem, where he enrolled in the Guild of St Luke. From 1644 he is documented in Haarlem at least once a decade until his death in 1677. In the 1660s he visited London, where he painted views of the city before the Great Fire of 1666, and during a later visit with his son Jan Wyk (1652-1700) who was also a painter, he decorated at least two rooms of Ham House: the Duke’s Closet and the Queen’s Closet (c. 1672-74).

It is difficult to establish a chronology, as Wijck seldom dated his works, and continued to produce Italian views long after his return to the Netherlands. These reflect his awareness of the Bamboccianti, especially Pieter van Laer (1599–1642) and Andries Both (1611/12–42); but unlike theirs, his works often seem based on firm geometrical principles. His late works are completely different from his earlier ones, comprising Dutch genre scenes and imitations of the work of David Teniers II (1610–90). 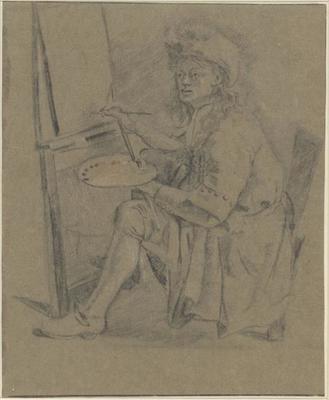 TECHNICAL NOTES
Coarse plain-weave linen canvas. Dark red ground. The paint is quite thickly applied and individual brushstrokes are discernible. Beva-lined and stretched onto a modern stretcher. The canvas was previously adhered to an oak panel (not original) with a major vertical split in the centre. The structural problems of the panel were detrimental to both the canvas, which deformed and split, and the paint layers, which cracked and flaked leading to significant losses. The paint in the sky is abraded and there are numerous small old retouchings. There is a fine network of craquelure, which is worst in the centre, and there has been some weave emphasis. Previous recorded treatment: 1911, relined, Holder; 1953–5, Dr Hell; 1988, examined, Courtauld Institute of Art, S. Collins; 1998, consolidated, panel support removed, lined and restretched, T. Cumine; cleaned and retouched, S. Plender.

The picture was formerly attributed to Jan Miel (c. 1599–1664), another Dutch Italianate painter. In his dissertation on Miel Thomas Kren discussed it among rejected works, and noted similarities with works by Thomas Wijck, an association that he repeated in a letter of 1997.10 That attribution was taken over by later scholars.

For Wijck Rome consisted not of grand ancient monuments but of the workaday world of the living city. His figures are occupied with everyday concerns; he often depicts the lives of women at work in rustic courtyards. His style seems to have been influenced by the street scenes of Pieter van Laer and Andries Both, but his figure types and the quiet world they inhabit are specific to his own œuvre.

A painting by Wijck in Oxford shows a very similar scene (Related works, no. 1) [2] with women washing clothes, where the whites of the clothing and laundry and the dog are also marked, but with a much lighter background. DPG247 includes a woman with a distaff as well: it seems to represent a conjunction of industry (the washing and spinning women) and repose (the family – man, woman and child – in the foreground). Another Roman courtyard is in Warsaw [3], originally in the collection of Stanislaus II August Poniatowski, King of Poland (1732–98), for which a preparatory drawing for the courtyard with the well exists. That drawing was also used for an etching (Related works, nos 2a–2c).

An inscription on the frame records (or previously recorded) that the picture was given to Desenfans by the great Shakespearian actor John Philip Kemble (1757–1823).11 However it seems more probable that it was given to Bourgeois, as he had been friends with Kemble; but it must have been before 1804, when Bourgeois broke with the actor for replacing his painting of Kemble in Coriolanus with another by Thomas Lawrence (1769–1830).12 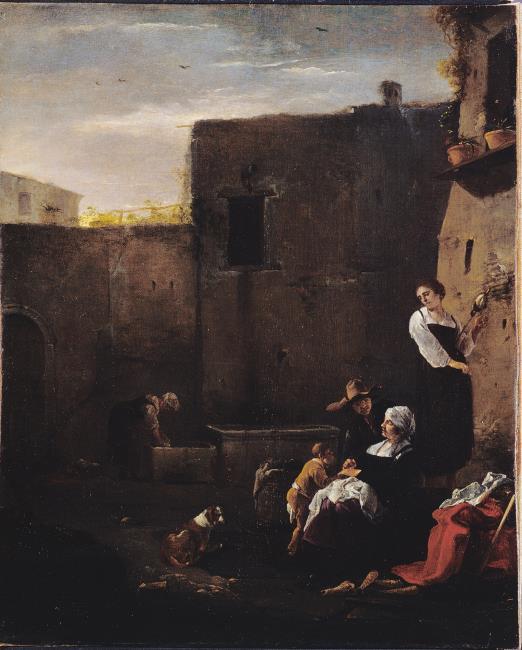 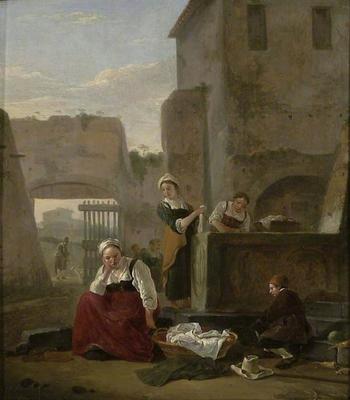 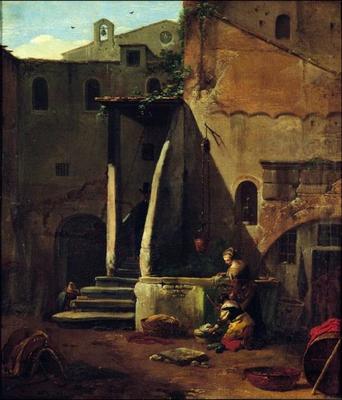 1 According to Van Thiel-Stroman 2006j, he must have been born before 1621, since he would have been at least twenty-one when he became a member of the Haarlem guild in 1642.

4 ‘An Old Building, with Figures. Inscribed, “the gift of John Kemble, Esq., the modern Roscius.” This picture has become very muddy and dark. The painter ranks with the second-rate Dutch masters.’

5 They say that the picture was given to the Gallery, and not to Desenfans or Bourgeois: ‘Presented to the Gallery by Philip Kemble.’

10 Letter from Thomas Kren to Richard Beresford, 8 Aug. 1997 (DPG247 file): ‘Wijck seems to me most likely and there are very good comparisons to be found in the Briganti book that I mentioned.’ That is Briganti, Trezzani & Laureati 1983a/1983b.