Parry Walton was a pupil of the portrait painter Robert Walker (1599–1658), and paid his dues to the Painter-Stainers Company in 1674. He is also mentioned as an assistant of Peter Lely (1618–80). In 1679 he was appointed Surveyor and Keeper of the King’s Pictures. Walton continued his work as a restorer under William, Prince of Orange and King of England (1650–1702) and Mary Stuart II (1662–94): he worked on pictures by Rubens, Mantegna, Titian and Van Dyck. After Sir Peter Lely’s death in 1680 Walton valued the paintings in his estate, and in 1682 he was involved in the important sale of Lely’s collection in three ways: as appraiser, as varnisher, and as purchaser of four pictures. He seems to have been very active in the 1680s and 1690s as a dealer and auctioneer.

PROVENANCE
Cartwright Bequest, 1686 (no. 122; £2, ‘A picture of a glass of Clarit, a Lofe of Bread an oring 2 apprecoks a Romer of Renish wine on a tabell couered with a green clouth in a gilt frame, 3 quarters clouth by m walton’; ‘walton’ repeated in the margin in the same hand).

The attribution to Parry Walton is based solely on the text in the Cartwright inventory. No other paintings by him are known. The style and the quality of this picture, however (even in its present rubbed state), are very close to the work of Simon Luttichuys (1610–61) . Ebert mentions five examples of paintings by Luttichuys that look very much like it (Related works, nos 1–5) [1].11 We can add a sixth example, not least because its measurements are the closest to DPG429 (Related works, no. 6). It is possible that Cartwright, the writer of his own inventory, made a mistake, and wrote the name of Parry Walton in the entry of the wrong still life (see under DPG355). Or is it possible that Walton, who was a picture restorer by profession, painted DPG429? The picture seems to be have been made by a professional. According to Gerson it looks very Dutch, not British.12

The objects, arranged on a table hung with a cloth, are set in an unidentified space. The selection roughly follows the description by Hoogstraten in 1678 of one of the types of still life painting: a ‘beautiful peach and apricot, or melon and lemon, and a clear wine rummer on a laden table’.13 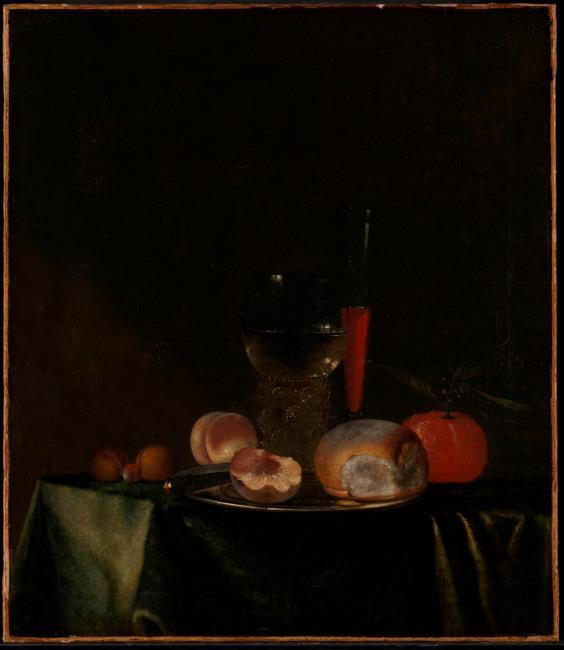 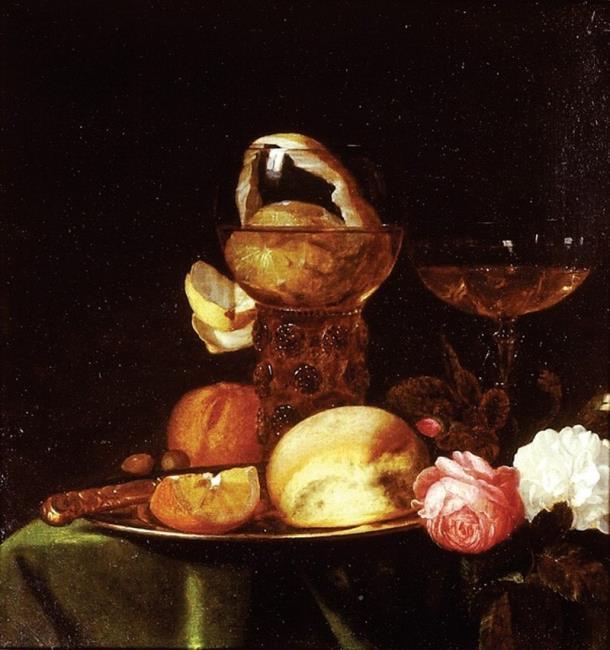 TECHNICAL NOTES
Oak panel, bevelled on all sides on the back. Appearance is generally poor, with uneven blanching across the surface. The paint surface has numerous drying cracks and unrestored paint losses, revealing the wooden support in places.

There are no signs of a personal style that could indicate a particular artist. The painting is not listed in the Cartwright inventory, but the pages with accession numbers 186–209 are missing, and this is marked ‘207’.16 Valentina Ravaglia suggested in conversation that this, rather than DPG429 (q.v.), might be the work painted by Walton. That would be more in line with the meager quality to be expected from an amateur artist. Peter Murray too wondered whether DPG355 might have been painted by Parry Walton.17 Walton’s name is, however, attached in the Cartwright inventory to DPG429. One or the other would be the only painting by the artist.

A still life such as this is called a banketje (little banquet) in Dutch inventories. The pewter platter and the pewter mounts on the stoneware beer tankard give a sense of modest luxury. The pickled herring is a standard element in still lifes of the first half of the 17th century.18 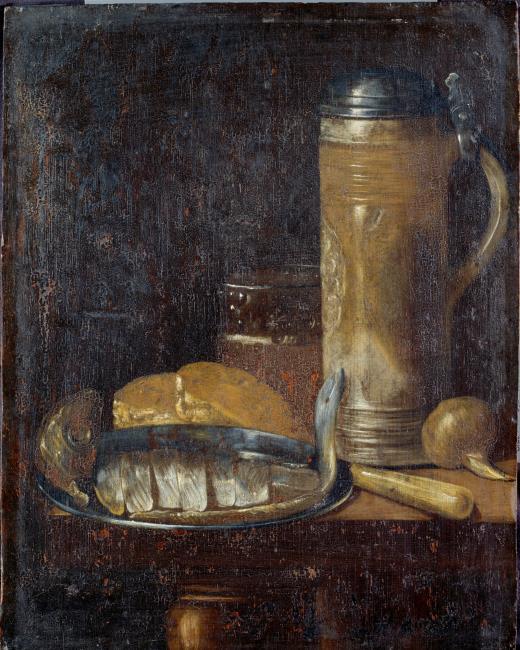 1 On 1 Dec. 1702 an advertisement was placed in the Daily Courant to announce the sale of his ‘Excellent Collection of Italian Pictures’ in his ‘late Dwelling-house’: see his biography on the website with restorers of the NPG, where is stated that he must have died before that date (https://www.npg.org.uk/research/programmes/directory-of-british-picture-restorers/british-picture-restorers-1600-1950-w.php).

3 Ingamells 2008, p. 86: ‘One of very few paintings known by Walton, DPG429 is wholly Dutch in character and much resembles the work of Simon Luttichuys (1610–61)’, and note 1: ‘Who was b. London but worked principally and d. in Amsterdam. I am grateful to Bernd Ebert for indicating this comparison.’ As Ingamells mentions no other picture by Parry Walton, we still assume that this is the only one. It was also the only picture under Parry Walton in Art UK, see https://artuk.org/discover/artworks/still-life-200408 (May 20, 2020).

4 Ebert 2009, p. 139: ob das Gemälde nicht möglicherweise eine Kopie nach einem unbekannten Gemälde von Luttichuys ist (whether the picture might not be a copy after an unknown painting by Luttichuys).

15 NB: in this entry there is a confusion with our original entry for DPG429. That picture is after Simon Luttichuys, not DPG355.