Jan Weenix [1] was the son of the painter Jan Baptist Weenix (1621–59). He probably trained in his father’s workshop and with Melchior d’Hondecoeter (1635/6–95), the animalier painter, he probably started with still lifes. In 1664 he became a member of the Guild of St Luke in Utrecht, and in 1668 he provided the painting required for admission. In 1675 he was living in Amsterdam, of which he was by then a citizen. From 1702 until 1714 he was court painter to the Elector Palatine Johann Wilhelm von der Pfalz (1658–1716) in Düsseldorf, for whom he painted hunting scenes for Schloss Bensberg, the Elector’s lodge (now in Munich). These paintings, interpreted as allegories of abundance, were very much appreciated for their naturalism in the 18th century by Goethe and others.

Jan Weenix’s early pictures (after the presumed early still lifes) are closely related to his father’s work in subject matter – Italianate genre scenes and landscapes – but his style is quite different, with subtler colouring and more refined figure types. After his father’s death in 1659 he probably inherited the contents of his studio, including Italian and other drawings. In the 1670s he began to produce adaptations of his father’s harbour scenes, and in the 1680s he painted still lifes (again; depending on whether the early still lifes were also painted by him), particularly of hunting trophies. He also painted portraits of the élite, for instance Sybrand de Flines (1623–97) and his wife Agnes Block (1629–1704), who was herself a famous collector and horticulturist (she was the first in the Netherlands to get a pineapple to flower). Weenix taught Maria Weenix (1697–1774), his daughter, and Dirk Valkenburg (1675–1721), who closely followed their master’s example. The French author Lejeune who in 1864 mentioned several compositions in Dulwich College by Jan Baptist Weenix meant both DPG47 (now Jan Weenix, below), and DPG329 (now attributed to Carl Wilhelm de Hamilton).1 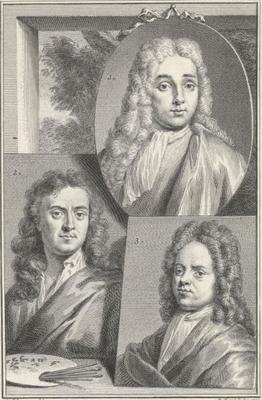 TECHNICAL NOTES
Plain-weave linen canvas. Reddish-brown ground with grey imprimatura. Wax-resin lined; the original top and bottom tacking margins are absent and the right and left tacking edges have been incorporated during a previous lining and retouched to widen the painting. There is slight weave emphasis from the lining treatment, and some areas of the paint appear slightly flattened. The paint is sound, with some small losses around the edges related to frame abrasion. There is disturbing blanching in the middle distance, foreground shadows, rocks and ruins, which has been partially retouched. The central tree has been extensively restored and now appears slightly too dark. There are white spots in the upper sky, which may be ‘protrusions’ that have developed from the pigment lead white in the ground layer. Previous recorded treatment: 1953, conserved, Dr Hell; 1976, wax lined, cleaned, blanching treated, retouched, revarnished and technical analysis undertaken, National Maritime Museum.

The painting is dated 1664, early in Weenix’s career, when he is first recorded as a member of the Utrecht painters’ guild, and closely imitates the style of his father, Jan Baptist Weenix, who had died five years earlier. It is not known whether he ever travelled to Italy; the column was probably copied from drawings made by his father in Rome.12 The sheep may be derived from drawings by his father, such as one in Vienna (Related works, no. 1). His father may also have provided the model for the composition as a whole, charmingly combining people and animals in a Southern landscape, with a vertical feature on one side and a similar group of sheep on the right (Related works, no. 2) [2]. The use of a significant vertical on one side also features in other paintings by Jan Weenix (Related works, nos 3, 4) [3-4].

Despite the fact that he probably never visited Italy Jan Weenix succeeded here in depicting an Arcadian idyll that is very attractive. It would seem that a message was intended, perhaps an allegory of industry. The boy is guarding his sheep (an activity with definite Christian associations), and he is also caring for the health of the puppy – by clipping its claws, as noted by Cockburn in his 1817 catalogue,13 or by filing them, according to the dress historian De Marly. De Marly describes the boy’s outfit, with his patched pair of trousers, and long coat that is probably second-hand, as worn, but representative of his time, the 1660s: his full shirt imitates the current style, as do his long locks, and his tall hat.14

The artist’s sketchy technique has always been admired: in 1842 Mrs Jameson called the picture ‘cleverly painted’, while in 1948 Stechow described it as ‘a brilliant “calligraphic” piece’. The brushstrokes are long and fluid in the scene in the background, more precise in the foreground. Some vestiges of black blocking-in strokes are still visible to the left of the older dog. 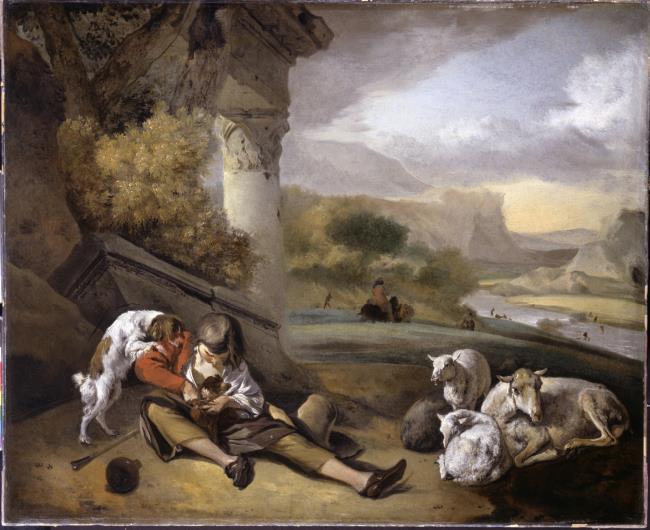 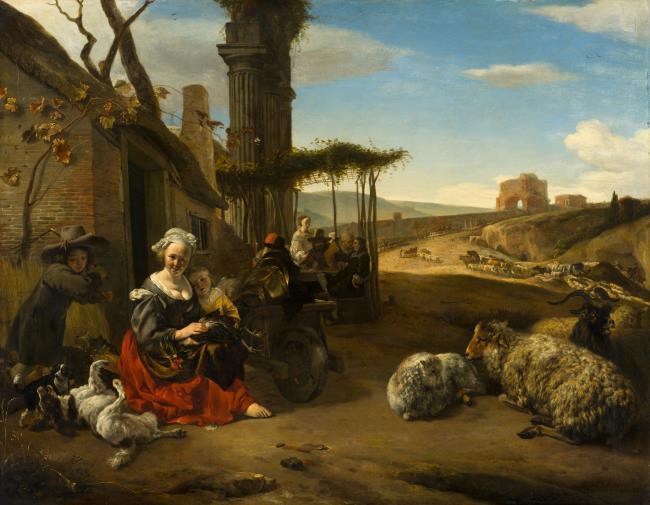 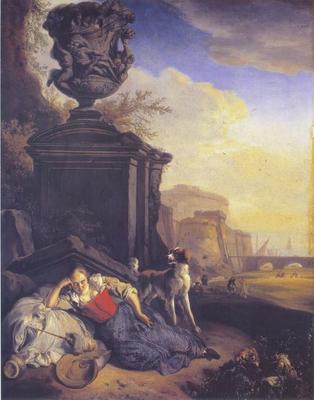 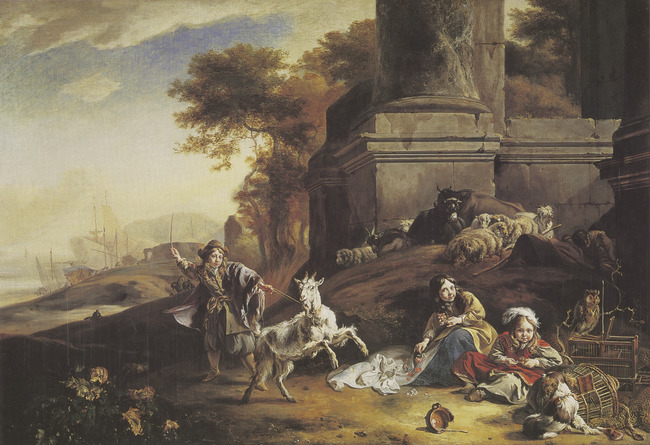 2 The description does not fit DPG47, since this does not include a shepherdess. In addition, Britton’s drawing is puzzling: it shows a vertical format, but with the height labelled 4' and the width 4'2" (the same is true of no. 1 on the page, which is DPG245: see note 47 under Calraet). However it is the only picture in the Small Drawing Room that could be meant by Britton’s drawing.

3 ‘WEENINX. Landscape, with a Boy paring the Claws of a Puppy. The mother looking anxiously over his shoulder at the operation. A river and waterfall, with rocky hills, form the distance.’

4 4 ‘Not a very agreeable picture, but very cleverly painted. There were two painters of the name – Baptist Weeninx, the father, by whom I presume this picture to be; and Jan Weeninx, the son, famous for his birds, dead game, and wild animals.’

5 1858: ‘The touch of this seems too broad for Weeninx fils’; 1859: ‘There is great power about this picture, which is painted with a broad bold touch. The canvas is not pampered with paint, until it becomes borne down with a sickening and enamelled mass of pigments, as is so frequently the case in these days. The young student may well take a lesson from it.’

6 ‘Painted under the influence of his father, J. B. Weenix, and probably after his studies in Italy; an early and very important work of the master.’