Hieronymus Wierix came from an Antwerp family of engravers. At first he made prints after other artists, including Albrecht Dürer (1471–1528). In 1570 he joined the publisher Christophe Plantin (c. 1520–89), and became a master in the Guild of St Luke in 1572–3. Between 1577 and 1580 he made prints with allegorical and political subjects that demonstrate a sympathy for the rebels against the Spanish Government. In the 1580s, however, he contributed to Counter-Reformation publications. He specialized in small devotional prints.

TECHNICAL NOTES
The copper panel is in good condition, but has three slightly uneven and bent corners. The paint surface is in good condition apart from some small areas of past flaking. Finger marks are visible where the ground was applied to the copper panel with fingers rather than a brush, a common practice for applying grounds to copper panels. Previous recorded treatment: 1953, Dr Hell; 2002, consolidated, cleaned and restored, N. Ryder.

The composition is based on a print by Hieronymous Wierix, The Infant bearing the Instruments of the Passion, as suggested by Xavier Bray in 2011. That Antwerp engraver made several versions of his print before 1619, some with thorns on Christ’s path and some without (Related works, nos 2 and 3) [2]. A painting now in Frankfurt (Related works, no. 1) [1] is closely related to DPG24, and both differ from the prints in similar ways. Christ’s halo has a different form, as does the gilded pattern on Christ’s cloak, that is absent in the prints.8 The paintings refrain from depicting the detail of the large nails, pincers and tongs that features in the prints: in the Frankfurt painting the Passion instruments are much smaller, while in the Dulwich version they are almost entirely covered by a piece of cloth. In both paintings Christ is walking on a small ledge strewn with flowers, while the prints show a hilly landscape, some with a walled city, and in both a crown of thorns, attached to the cross, is added to the instruments of the Passion that the Infant is bearing.

DPG24 entered the Dulwich collection as the work of the 17th-century Italian painter Carlo Dolci (1616–86); in 1880 it was called German. It is in some way related to the painting in Frankfurt, there attributed to a German (?) master working between 1600 and 1620 (Related works, no. 1) [1]. Recently Alistair Laing suggested that it was Spanish;9 Xavier Bray said that the delicate handling of the paint makes an attribution to an anonymous Spanish copyist after Wierix most probable. However, a Flemish artist working for the Spanish market is also a possibility. Flanders had a substantial copper industry, which exported copper plates all over Europe, while in Spain very few copper engravers were active.10 There is no copper mark on the back that might support an attribution to any school. It could be an Antwerp copper plate painted in Spain, by a Spanish or even by a Flemish artist.

This small picture was an object of private devotion. The more delicate treatment of the Passion instruments could imply that it was intended for a female patron, possibly a nun. The text on the prints, In laboribus a iuuentute mea, is from Psalm 88:16 (in the Douai-Rheims Bible); the whole sentence is Pauper sum ego et in laboribus a iuventute mea exaltatus autem (I am poor, and in labours from my youth: and being exalted have been humbled and troubled). The prints, DPG24 and the picture in Frankfurt prefigure the Passion of Christ. 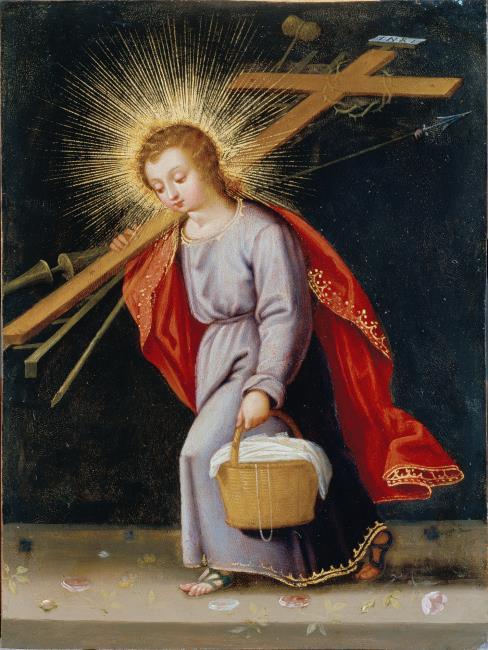 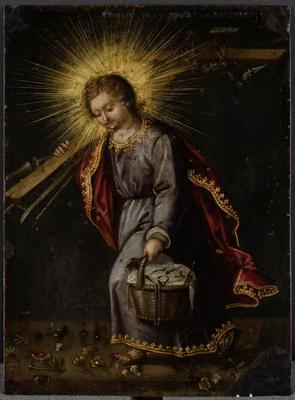 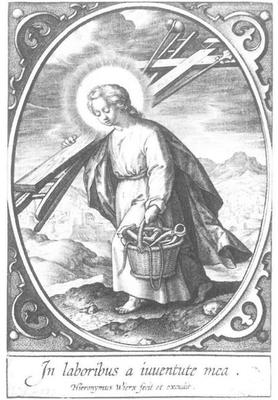 2 ‘Christ as a Child bearing his Cross. The subject symbolically treated in a very small highly finished picture, about four inches in height.’

3 ‘(after) Carlo Dolci. […] This picture cannot have been painted by Carlo Dolci. His pupils Alessandro Lomi and Bartolommeo Mancini, and his daughter Agnese painted many copies of his work. This may be one.’

4 ‘Unknown Artist about 1600. […] Formerly attributed to Carlo Dolci. The general conception is quite in the style of the Northern Schools; the picture clearly shows in its minute execution the influence of Elshaimer [sic].’

8 Note by Lucy Byford, 2011 (DPG24 file). According to Almut Pollmer-Schmidt (see her email mentioned in note 5), the two paintings are based on the same model, not directly on the Wierix print.