It is not recorded woth whom Tobias Verhaecht studied. His style was indebted to the mannerist world landscape developed by artists like Joachim Patinir (c. 1475/80–1524) and Pieter Bruegel the Elder (1526/30–69). Before 1590 he travelled to Italy and first worked in Florence. He then moved on to Rome where he was active as a painter of landscape frescos. He returned to Antwerp where he became a master of the Guild of St. Luke in 1590–91. He was the first teacher of Peter Paul Rubens (1577–1640), who studied with him around 1592 but left because his interest was history painting and not landscape.1 Verhaecht was a member of the Violieren, a local Chamber of rhetoric connected to the Antwerp Guild of St Luke for which he wrote a comedy in 1620. The artist died in Antwerp in 1631.

TECHNICAL NOTES
The varnish is very shiny and there are remnants of older varnish in the top left corner of the sky. Previous recorded treatment: ?early 1990s, conserved, Courtauld Institute of Art.

Stylistically DPG513 seems to derive from a Flemish artist working at the end of the 16th century; Tobias Verhaecht from Antwerp is a likely candidate: see for instance his The Punishment of Niobe in Valenciennes (Related works, no. 1) [1]. Cartwright’s inventory gave the subject as Time and Truth, but this image seems to be a combination of several iconographical traditions: the story of Perseus and Andromeda; Father Time – the liberator is carrying a scythe – revealing Truth; Day and Night; depictions of the Burning of Troy; and, as suggested by Elizabeth McGrath, depictions of Belgica or the Netherlands.12 Andromeda/Truth/Belgica is wearing a crown; possibly the scene as a whole refers to a topical event, but which one is not clear. It is possible that a print of such an event was the source, but it is also possible that a not-too-gifted amateur was trying his hand by combining all these themes in one picture.

In Greek mythology Perseus rescued Andromeda, a princess chained to a rock and threatened by a sea monster, after he had defeated Medusa, another monster, with snakes as hair. He used Medusa’s head as a shield: whoever looked at it directly was turned into stone. Here the shield with Medusa’s face is on the ground between the woman, who was chained to the rock, and a wounded or dying man, together with a helmet, a sword (under the shield), a rather modern-looking rifle and a gunpowder pouch. The monster that was trying to devour Andromeda is missing from the scene. The wounded man may one of its previous victims or, according to Elizabeth McGrath, he may be a defeated Perseus.13

One of the classic depictions of Father Time with his scythe shows him revealing Truth, a naked woman formerly covered with veils, signifying that every misdemeanour or lie that obscured the facts in the past will eventually be swept aside, leaving Truth revealed in all her clarity and beauty.14

Interestingly, the themes of both Perseus and Andromeda and Time and Truth are known to have been used for prints referring to topical events. Chrispijn van den Broeck (1524–90/91) invented a design for a print with the Prince of Orange as Perseus, saving the Netherlands from the Spanish sea monster, c. 1577 (Related works, no. 2). In a much later broadside Time and Truth are revealing cruelties committed by the Dutch against the English in the current war (Related works, no. 3). In a print defending Maria de’ Medici in 1637, we see Father Time twice, once revealing Truth and once destroying Medusa, flanking a personification of a city wearing a mural crown (Related works, no. 4), in combination with depictions of night and day (the scenes below).

On the left of DPG513 is an idyllic rural scene in the daytime with deer, flowers and a sailing ship on the river, and on the right a city behind its walls burning at night.15 In the print after Marten van Cleve I (1527–77/81) of c. 1580 Day (Dies) is depicted in the lower half of the image, and Father Time is present as well (Related works, no. 5). In the 16th and 17th centuries the burning of Troy was frequently depicted, for instance by Joos de Momper II of Antwerp (1564–1635) and Pieter Schoubroeck of Frankenthal (1570–1607/8), who seems to have specialized in the depiction of burning cities (Related works, nos 6 and 7).

Belgica, as the Netherlands, is depicted in several scenes at the beginning of the Eighty Years’ War (for instance Related Works, nos 8a, 8b).16 She is shown wearing a crown in the form of a city wall (in 8a), and a much more luxurious one as Belgica florens, similar to the one in DPG513 (8b). Several scenes are known where Belgica is depicted in both prosperity and adversity, as Belgica florens and Belgica destructa (the Netherlands prospering and the Netherlands destroyed) such as in a sense on the left and right of DPG513 (8b).

Elizabeth McGrath thinks that the woman is Belgica, and the scene a parody of the story of Andromeda, with a sort of failed modern Perseus lying wounded (or dead) on the ground beside her: hence the combined reference to Medusa and modern arms. It is possible that he is a reference to Archduke Matthias, later Emperor Matthias II (1557–1619) – or another failed ‘saviour’ – since the figure might be meant as a portrait.17 The familiar political illustrations of Andromeda as the Netherlands rescued by a new Perseus (in pageantry and prints) are relevant here.18 The message seems to be, however, that Time alone will rescue the Netherlands from the landscape of war (on the right) to that of peace with agriculture (a familiar contrast of imagery in the political prints and pageants of the later 16th century in the Netherlands).19 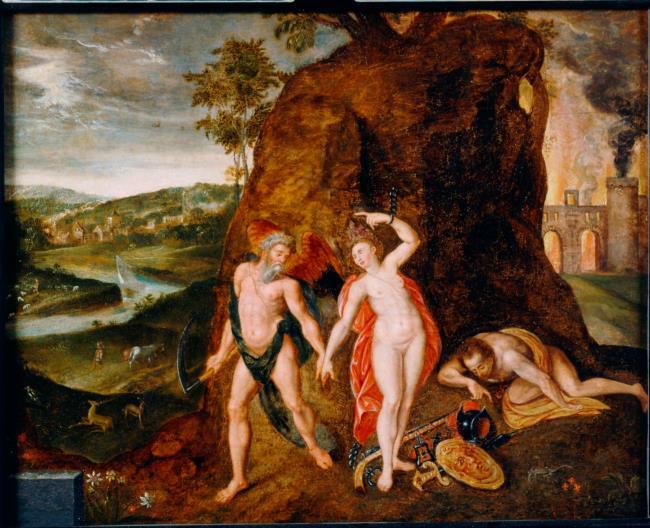 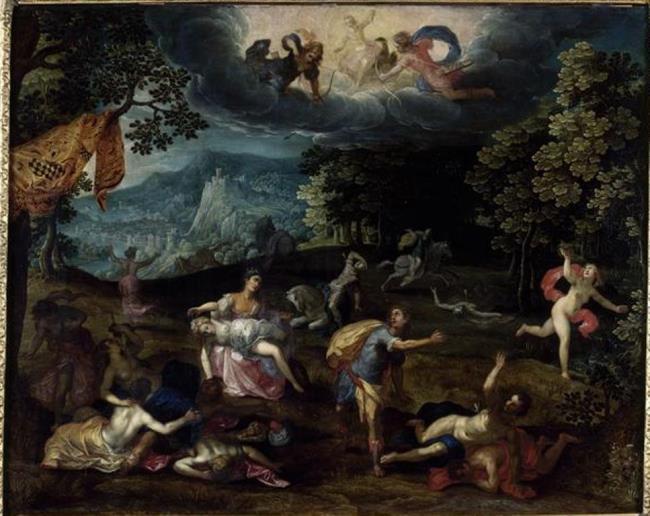 2 ‘Time is shown releasing a female figure, who presumably represents a city since she seems to have a mural crown as a headdress; at her feet are arms, on the right a wounded man, and in the right background a town in flames.’

13 That Perseus had been wounded during the rescue of Andromeda would however be a rather unusual variation of the story. This motif of the man lying on the ground also appears in the print with the Prince of Orange as Perseus (Related works, no. 2), where he is depicted as one of the victims of Spain (the Spanish sea monster).

16 For more about depictions of Belgica in general see Yasui 2009; McGrath 1975 discusses a series of drawings of the history of the Netherlands by Joachim Wtewael, possibly meant to be engraved, in a broader context.

17 Matthias was Governor-General of the Netherlands (1578–81), against the wish of Philip II of Spain. When Philip II abdicated in 1581, Matthias returned home to Vienna.

18 However instances are known where Andromeda is France, as in a French print of 1594; see also Courtright (2016, pp. 78–9, 201, fig. 3) where the Déliverance de la France by Perseus is discussed. There is a silver medal of 1704 in the Teylers Museum (TMNK 01457); on one side Perseus has just beheaded Medusa; on the other side is a helmeted woman with spear and freedom hat on a pedestal bearing the letters SPQM, pictured in front of the town hall of Middelburg: Perseus has saved the city of Middelburg (see https://www.teylersmuseum.nl/nl/collectie/munten-en-penningen/tmnk-01457-rust-in-middelburg-hersteld (Oct. 25, 2020). The tradition of Perseus saving cities or countries (whether or not they are depicted as Andromeda) had a long life.

19 See the email mentioned in note 12 above.