Jan Vermeer (van der Meer) van Haarlem I [1] was born in Haarlem, where he studied for ten years with Jacob de Wet I (c. 1610–77/91), a Rembrandtesque painter of history, interiors, landscape and architecture, but his work shows the influence of Jacob van Ruisdael (1628/9–82). He specialized in landscapes and winter scenes. However, the derivative nature of his work and its consequent subsuming into the œuvre of the better-known artist, combined with an apparent variety of signature styles and confusion with the more Italianate output of his son, have resulted in the characteristics of his œuvre being difficult to identify conclusively. 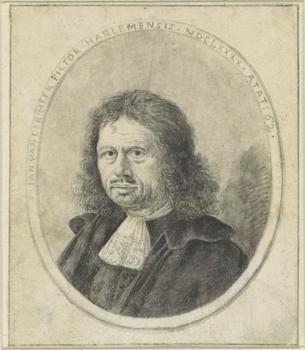 TECHNICAL NOTES
Two-member oak panel with a vertical grain, a very slight concave warp and a perfect vertical join. The reverse edges are bevelled, except for the bottom, and there are thin battens added to the bottom and right edges. The right member of the panel has old wormholes, and there is a tiny chip at the right of the top edge. There is very slight thinness on either side of the path, but areas such as the trees and sky have some high impasto. There are some remnants of an old darkened varnish in the dips of the impasto (for example, in the middle-distant landscape below the church) due to a previous imperfect cleaning. Although largely well matched, some of the old retouchings appear slightly pale and matt. An unidentified signature or inscription has been noted on the rocks on the left. Previous recorded treatment: 1933, varnished; 1935, back of panel lightly paraffined to treat woodworm; 1953, conserved, Dr Hell; 2000, frame treated for insect infestation with Thermo Lignum Warmair process.

First catalogued in 1813 as by Hobbema, no doubt because of the device of woods framing a central architectural scene, then reattributed to Adriaen Hendricksz. Verboom (1627/8–73) in 1880 by Richter & Sparkes. Verboom was a Rotterdam artist, who also lived for a time in Haarlem and Amsterdam, and who was influenced by Jacob van Ruisdael. The birch trees are indeed similar to those in a landscape by Verboom (Related works, no. 3), but in 1996 Giltaij rejected that attribution.12 De Kinkelder followed a year later, arguing that it was certainly by a Haarlem artist, and cited in comparison, especially for the birch trees, a picture by Jan Vermeer van Haarlem I (Related works, no. 1a) [2].13 In 1998 Beresford catalogued the picture as ‘Follower of Ruisdael’, noting that the traces of a signature p[.]am…[?] (with possible traces of a date, 164[.]) ruled out Verboom. In 2004 Ian Dejardin saw that the inscription on the picture is actually johannis v...r and not p[.]am…[?], as Beresford had suggested, and therefore proposed an attribution to Jan Vermeer van Haarlem I. In comparison Dejardin convincingly cited the picture by that artist in Oxford (Related works, no. 1b). Later an even more convincing example emerged (Related works, no. 1d) [3] 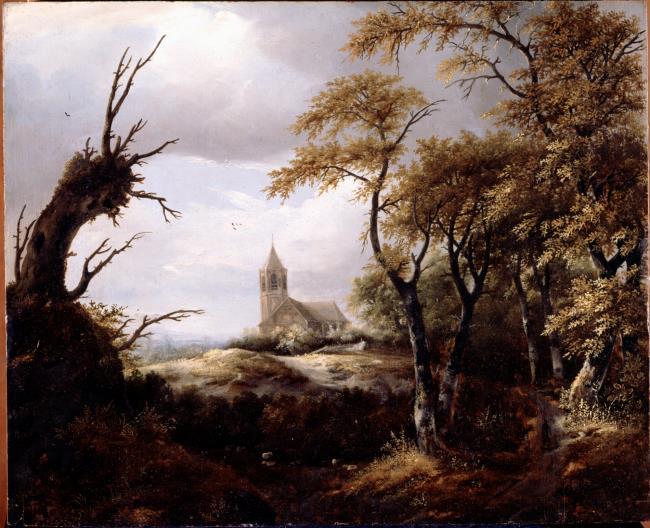 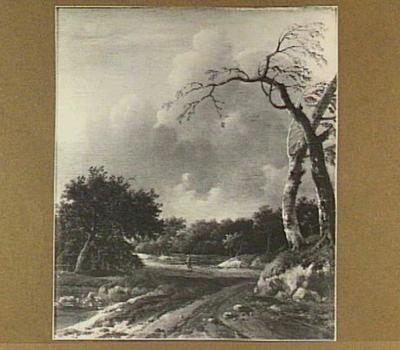 1 ‘Minderhout Hobbima. A Landscape, with a church in the distance; the sky hazy and natural, and the aërial perspective well preserved.’

2 ‘More probably by Van Der Straeten, whose Christian name seems uncertain. Some make it Nicholas – some Henry. He was a Dutch painter of the style of Hobbema & Ruysdael, who came to England about 1690 or later, & painted many pictures.’ Denning probably means Hendrik van der Straaten (c. 1665–London 1722).

3 ‘This has been ascribed to Hobbema, but it is more probably by Van der Straeten, whose Christian name seems uncertain. He was a depraved Dutchman who lived at the End of the 17th and beginning of the 18th centuries, and who honoured England with his presence in order that he might show those of the lovers of Art who would condescend to visit him in his pot-house retreat, how he could paint ten pictures in a single day.’

7 https://artuk.org/discover/artworks/landscape-with-a-herdsman-on-a-wooded-hill-229231 (May 10, 2015; called Jan Vermeer van Haarlem II, but with the same dates as our Jan Vermeer van Haarlem I). On a photograph of the Oxford picture in the DPG9 file Ian Dejardin wrote: ‘not Vermeer the Elder but possibly the Y. It is a copy after Ruisdael. Signature not right.’

12 Letter from Jeroen Giltaij to Richard Beresford, 5 Sept. 1996 (DPG9 file): ‘The trees at the right remind a little bit [sic] of this artist, but the willow [on the] left is something completely different.’

13 Letter from Marijke de Kinkelder to Richard Beresford, 17 Nov. 1997 (DPG9 file): ‘It is definitely by a Haarlem artist but I have not found the right one yet. The staffage is probably a later addition since it is completely the wrong scale; the trees look like giants. For now I would suggest “Anonymous follower of Jacob van Ruisdael.” […] This last seems a reasonable suggestion, as the artist [Jan Vermeer van Haarlem] favoured scenes of buildings set amongst dunelands, often with surrounds of woods. The birch tree to the right, for example, is similar to those in another picture attributed to the artist in the Stichting Nederlands Kunstbezit, The Hague (inv. no. 2790 [Related works, no. 1b]), while the olive tonalities are reminiscent of numerous examples of his work. He also seems to have had frequent problems with the size of his figures in these landscapes, as can be seen by the sheep in the foreground of DPG9. However, until more evidence is forthcoming about the activities of Jan Vermeer van Haarlem II it is probably safest to retain the existing attribution.’