TECHNICAL NOTES
Plain-weave linen canvas. Glue-paste lined; tacking margins present. There is an unpainted margin on the left edge (possibly the original tacking margin, incorporated into the painting to extend it), and on the right edge there is a narrow addition. There is a 6 cm restored tear in the centre. This work is thinly painted and slightly abraded in the darks and half-tones. There are two areas of raised craquelure. There are scattered old discoloured retouchings over the paint surface. Previous recorded treatment: 1953, cleaned and restored, Dr Hell.

The scene shows a kortegaard or guard room. Guardhouse scenes were popular between about 1620 and 1680, in both war-torn Flanders and the much quieter Northern Netherlands, notably in the œuvres of Pieter Codde (1599–1678), Jacob Duck (c. 1600–1667) and Anthonie Palamedesz (1602–73).21 Several dozen kortegaard scenes were painted in the South, and some hundreds in the North.22 David Teniers II was among the painters attracted to the subject. From the 1640s on he produced numerous pictures of soldiers drinking or playing cards in guard rooms, usually in what seems to be a large hall in a castle. He generally followed a simple formula of placing a still life of weapons, armour and military equipment – which could be interpreted as trophies – in the foreground and soldiers in the background.23 This is the arrangement in DPG54 and in pictures in Chicago (Related works, no. 1) [1] and the Prado (Related works, no. 2a). A similar Guard Room in Amsterdam is dated 1641 (Related works, no. 2b) [2], and one in the Hermitage is dated a year later (Related works, 2c), so DPG54 might plausibly be dated to around this time, as Murray suggested in 1980. For figures, the building and the armour Teniers made preparatory drawings in pencil, or, in the case of the drawing in the Courtauld Institute, in several media (Related works, no. 6).

According to Klinge, DPG54 features as the upper picture on the right-hand wall in the portrait of Sir Lawrence Dundas (c. 1710–81) with his grandson of the same name (1766–1839) by John Zoffany (1733–1810; Related works, no. 7) [5].25 Dundas was Commissary-General and Paymaster to the Army in Scotland, Flanders and Germany during the Seven Years’ War (1756–63), and an important collector of Dutch and Flemish art.26 Klinge assumes that DPG54 and the painting in Chicago (Related works, no. 1) [1] formed a pair, and were together in the Dundas collection.

They are indeed about the same size, and have a composition that looks mirrored when the Chicago painting is on the left: the flagpole diagonally pointing to the right there almost forms a triangle with the line dividing light and shadow in DPG54, and the boys, one with a cloak and the other with a sword and a sash over his arms, walk towards each other (albeit they are looking in different directions).

Smith in 1831 said that DPG54 had been in the collection of Dundas, based on the Dundas sale catalogue of 1794, but he added that that both pictures were on copper,27 which was not said in the 1794 catalogue, while the pictures in Dulwich and Chicago are on canvas. DPG54 does look very much like the picture in the Zoffany painting (more than the picture in Chicago, which is as it were in reverse), but it is questionable whether it was in the Dundas collection, as Teniers produced many pictures with similar compositions. The only difference is that Zoffany shows it with a landscape format: that could reflect Zoffany’s artistic freedom, or it could be a different picture. 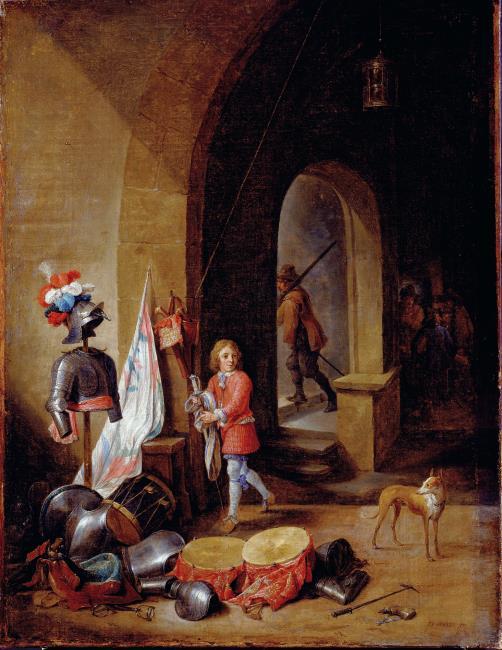 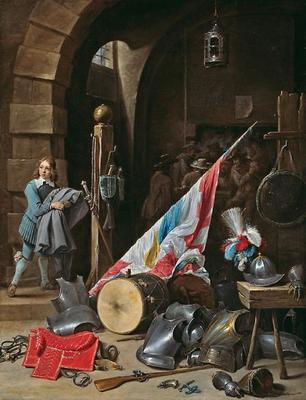 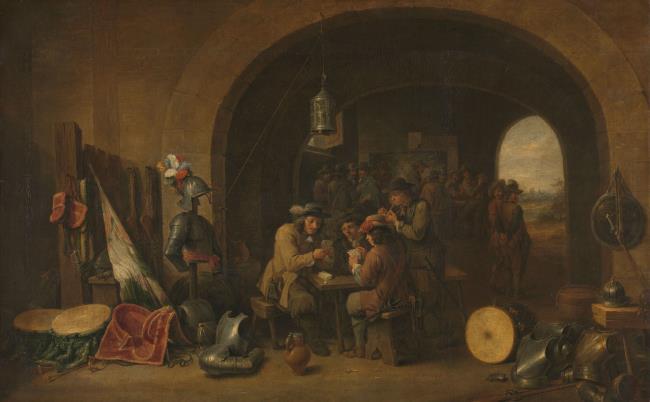 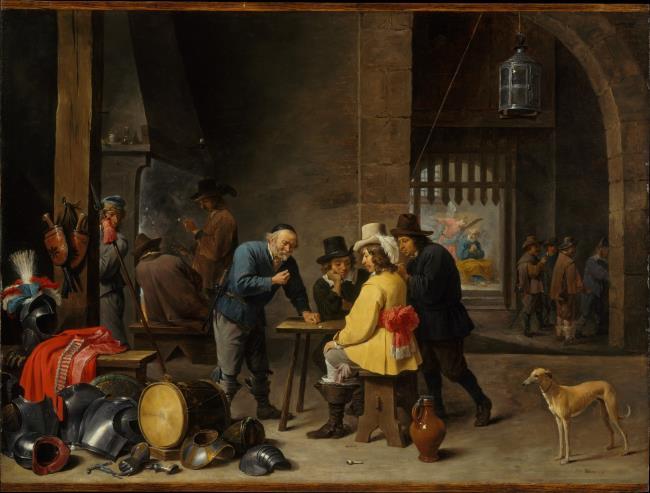 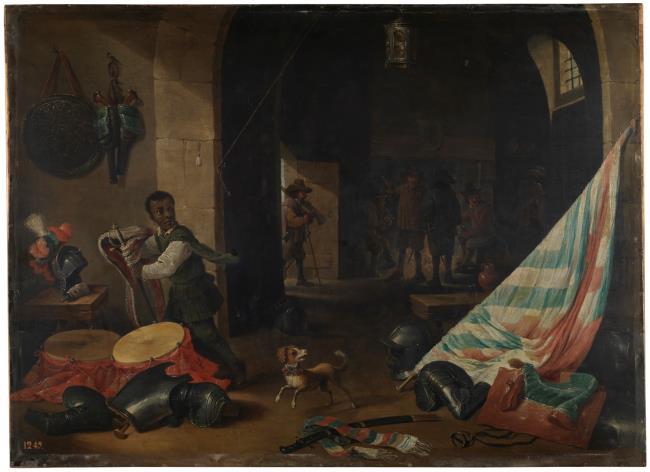 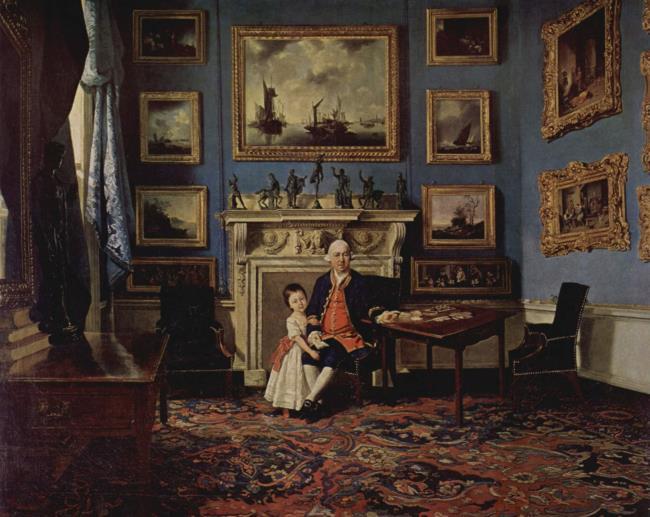 1 According to the Dundas sale catalogue (see also the next note: several De Neufvilles lived in Amsterdam in the 18th century). Robbert’s sale was in 1736 (Lugt 460); no Teniers is mentioned in the catalogue. The collection of Jan Isaac de Neufville (1706–72) was sold on 6 Aug. 1783 (Lugt 3609); there two pictures by Teniers are mentioned (a pair on copper), with a different subject: nos 76 and 77 show two interiors with singing- and card-playing farmers. However, according to Plomp (2001, p. 291) this collection was divided among the heirs of Jan Isaac. Another sale for which the name of Neufville was mentioned (a.o.), 24 ff Jan. 1763 (Lugt 1261), included a picture by Teniers with cupids on a beach.

2 GPID (4 Jan. 2014); Lot 33: ‘Teniers – A similar Subject [as lot 32: ‘A Corps du Garde, a Man entering with a Cloak, the Fore Ground enriched with a Variety of Armour, Colours, Drums, Arms, &c. in the Back Ground are six Figures regaling round a Fire, with the same Advantages as the preceding Lot (These Pictures were formerly in the Possession of the De Nevilles of Amsterdam.)] – 2' 4" h × 1' 9" w.’ No support is mentioned, but Smith (see note 4 below) says that these two pictures were on copper. The description fits on the one hand the Chicago picture (Related works, no. 1: a man/boy with a cloak), and on the other hand DPG54 (the group around the fire in the dark on the right).

3 ‘An Armoury, with armour, drums, kettle-drums, and other accessories, hanging and lying about; a boy taking down a sword and a belt; which, with a cuirass and a handsome helmet displayed on a stand; a door open in the distance, through which a soldier is seen, as if just armed, and going up stairs, form the subjects of this pleasing picture.’

5 ‘This is a good picture of the kind. Teniers has painted the same class of subject twenty times at least, varying the composition.’

6 ‘Teniers has often repeated this subject with some few alterations. It is a good picture, but not noticed or numbered in Smith’s Catal: Rais:’

23 See for Teniers’s depiction of armour in his paintings Grancsay 1946.