TECHNICAL NOTES
Single-member oak panel with horizontal grain and a slight horizontal warp. The paint is in good condition with only a few very small retouchings; there are, however, old losses in the centre and above St Peter’s shoulder that have been retouched at some stage without first being filled. In some areas the thin paint allows the grain of the panel to show through. There is raised craquelure towards the top right corner and in the dark part of the arch above St Peter; elsewhere the fine craquelure is predominantly vertical. Previous recorded treatment: 1933, glazing added to frame; 1949–53, conserved, Dr Hell. 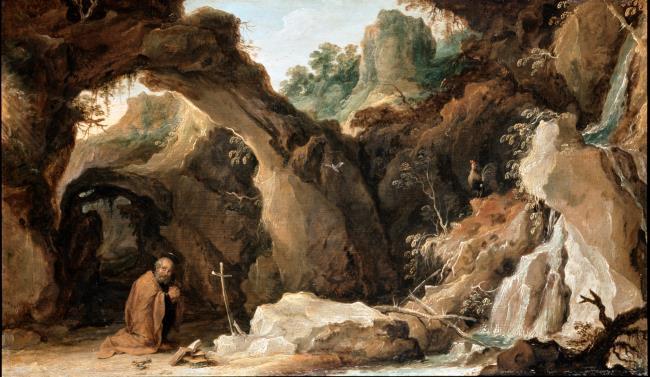 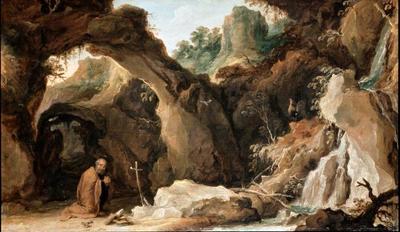 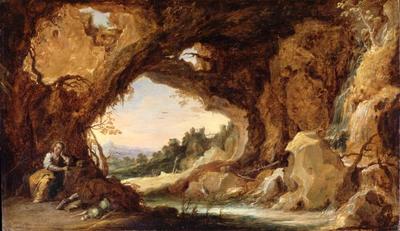 TECHNICAL NOTES
Single-member oak panel with horizontal grain and a minor horizontal warp; there is a thin horizontal crack running across the sky in the centre (above the two birds) and the verso edges are slightly bevelled. The fine paint craquelure is predominantly vertical and there are several cracks in the paint, relating to the grain of the panel. The distant hills have retained their vibrant blue tint, indicating that the pigment used is likely to be a mineral blue; it has not been tested but has the appearance of ultramarine. There are small retouchings, including some on the Magdalen’s forehead, nose and sleeve. Previous recorded treatment: 1933, glazing added to frame; 1949, conserved (including frame), Dr Hell. 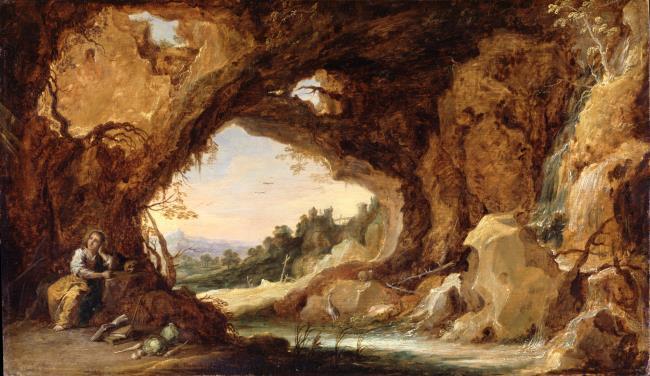 These two paintings were already paired in Britton’s inventory of 1813, and continued to be in all subsequent gallery publications. Whether they were created as a pair, however, is debatable. In favour is the fact that the combination of St Peter and St Mary Magdalen is not unusual: both had erred before becoming saints, and both had tried to atone for their sins by life in the desert and contemplation. They are variations on a theme, using a very similar composition. Against the idea is the fact that in both paintings the figure sits on the left, so they do not form a balancing pair. (Another picture of St Peter in Penitence (Related works, no. 9d) was paired with an Annunciation, but again it is not known how or when they became pendants.) 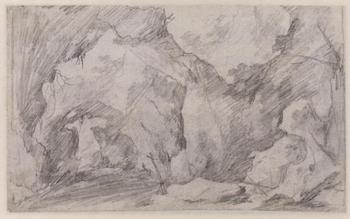 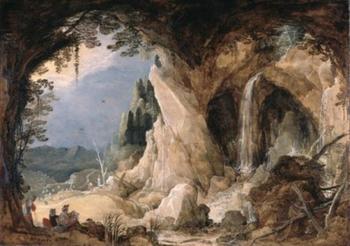 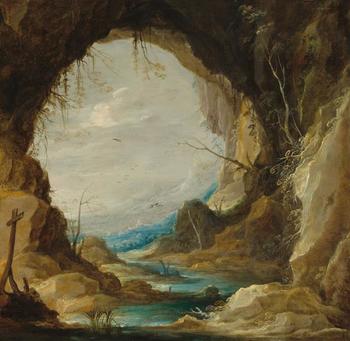 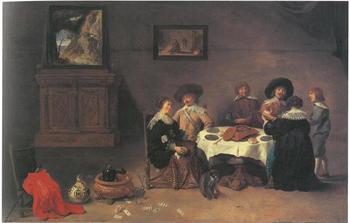 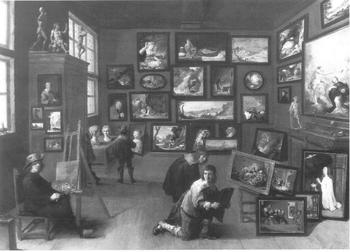 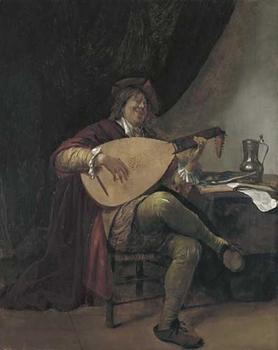 St Peter
Teniers has placed St Peter in a rocky landscape. He kneels before a wooden cross and clasps his hands in penitence. To the right, beside a small waterfall, is the crowing cock. In the background is a hilly verdant landscape. The landscape in the foreground is related to a surviving preparatory drawing, which according to Bradford (1991) is imaginary (Related works, no. 1a) [1]. Interestingly, although the cross is present in the drawing, St Peter, his books and other paraphernalia are not. According to Klinge (1991) this could suggest that Teniers only added figures – and meaning – to a picture after he had found a buyer. There are some similarities to a drawing of St Anthony in a grotto landscape in Rennes (Related works, no. 1b).

The figure of St Peter is based on a prototype by Guido Reni (1575–1642), known from many prints.23 In the 1650s, preparing Theatrum Pictorium (1660), Teniers depicted a small head of St Peter in a painted frame, after the Reni in the collection of Archduke Leopold Wilhelm (Related works, no. 9a). This figure of St Peter also occurs in other scenes of the life of the saint, for instance in The Denial of St Peter in the Louvre (Related works, no. 9c). Like the woman at the door and the boy with armour, St Peter was a stock figure in Teniers’ work.

St Mary Magdalen
According to the medieval Church, as expressed by Pope Gregory the Great in the 6th century, Mary Magdalen was two women in the New Testament – Mary of Magdala, also called Mary of Bethany, and the ‘sinner’ of Luke 7.2.24 As the ‘sin’ of Luke’s unnamed woman was prostitution, Mary Magdalen henceforward became identified as a prostitute. Her life was embroidered in numerous medieval sources, the best-known example of which is the 13th-century Golden Legend by Jacobus de Voragine, who asserted that after Christ’s death Mary Magdalen continued her repentance for her earlier life by living as a hermit in a cave in the mountains of St Baume, Provence.25 There she was said to have spent thirty years, eating and drinking nothing, being raised to heaven by angels several times a day to be fed spiritual sustenance.

The Magdalen is here depicted as young and fully clothed, seated to the left in a grotto. Looking up, she rests her head on one hand in a gesture of melancholy, while the other hand rests on a boulder with a skull upon it. Through the centre of the scene runs a small stream fed by a waterfall on the right and inhabited by a heron (usually symbolizing renewal). An opening in the grotto reveals a wooded hilly landscape with a cross and a distant castle.

In Italian art the Magdalen is usually shown almost or completely unclothed but covered by long unkempt hair, as in the copy Teniers made after Palma il Giovane (1544/8–1628); Related works, no. 10). In the North, however, she is usually shown clothed or semi-clothed as here.26 Her youth, melancholy expression, and the cross in the distance suggest that she has just begun her solitude; the vegetables before her would seem to contradict the idea that she obtained food from heaven.

The Magdalen was considered a worthy role model for women and was frequently invoked as an intercessor.27 She was also a popular topos for portraits of aristocratic women.28 If she was indeed paired with St Peter, founder of the Catholic Church, the two pictures might have been commissioned from Teniers by or for a female patron – indeed, given the monastic theme, for someone with a vocation. It should on the other hand be remembered that in the 1630s Teniers was supplying the dealer Chrysostom van Immerseel with small-scale religious works for the Spanish market.

In the setting and colours of both paintings Teniers was clearly influenced by the mountainous landscapes of Joos de Momper II, such as one of c. 1616 in Bonn (Related works, no. 2) [2], where artists are shown drawing in the left-hand corner. The figures are much smaller than Teniers’ saints, as are St Jerome and his lion in a landscape by De Momper and Frans Francken II (Related works, no. 3). A grotto scene in Washington, attributed to De Momper until recently, has now been catalogued as David Teniers II by both Klinge and Wheelock, chiefly on technical and stylistic grounds (Related works, no. 4) [3].29

Teniers produced a number of grotto scenes in the 1630s. They represent a transition between the late Mannerist tradition of depicting the landscape in three distinct colour bands – brown earth tones for the foreground, green for the middle ground, and blue for the background – and his later pastel-tinted style. He used the grotto motif for various religious subjects, such as The Visit of St Anthony to St Paul in Geneva (Related works, no. 5) and St Anthony the Hermit in Frankfurt (Related works, no. 6). Other Flemish artists used the grotto for religious scenes, such as Christ Child looking at His Cross in Dresden, where putti point to the Promised Land outside the grotto (Related works, no. 7). And Teniers also placed secular scenes in grottoes, as in the picture with gipsies in St Petersburg (Related works, no. 8).

Paintings of grottoes are shown hanging on the walls in several interiors by Teniers of the 1630s. They usually include hermits and penitents, and present a contrast to the scenes in the rooms – with titles such as Merry Company or Company at Table and The Prodigal Son between the Prostitutes (such as Related works, nos 11a and 11b). Kauffmann in 1943 interpreted the grotto in the Allegory of the Five Senses (which takes the form of a bourgeois conversation piece: Related works, no. 11c) as a reference to asceticism, as a contrast to the senses.31 Interestingly, in a self-portrait with lute by Jan Steen in Madrid (c. 1663–5) an oil sketch with a hermit seems to be depicted, the composition of which looks very much that of our two grotto pictures (Related works, no. 12) [6]. He seems to be a reference to spiritual contemplation in contrast to the joyous lute-player, a juxtaposition comparable to that in the Teniers interiors.32

Two pictures similar to DPG314 and DPG323 appear in a self-portrait of the artist in his studio painted in 1635 (Related works, no. 11d) [5]. However, the picture with the composition which in Dulwich shows St Mary Magdalen is shown with seemingly different proportions to DPG323 and without the figure of the saint, so it may be a version of the Dulwich picture.33

It has proved impossible to trace the provenance of DPG314 and DPG323 before Bourgeois’ ownership. Their absence from Desenfans’ lists, inventories and sales makes it possible that they were purchased after his death. 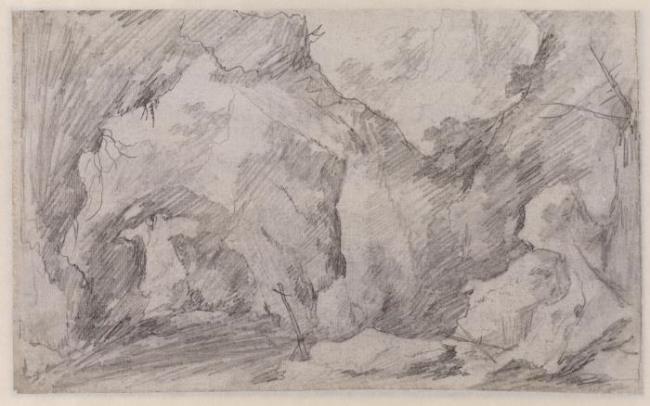 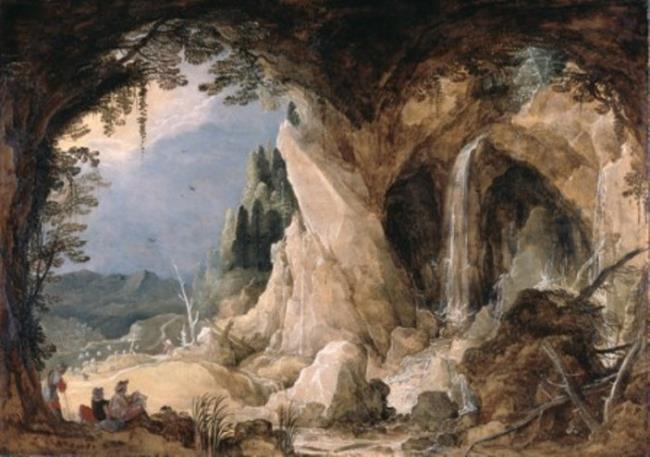 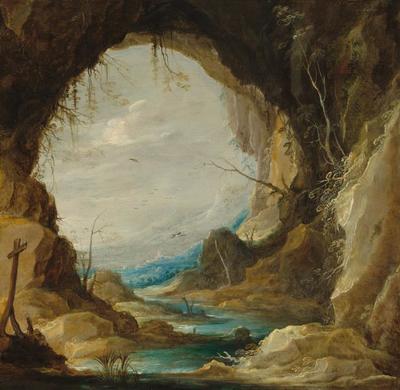 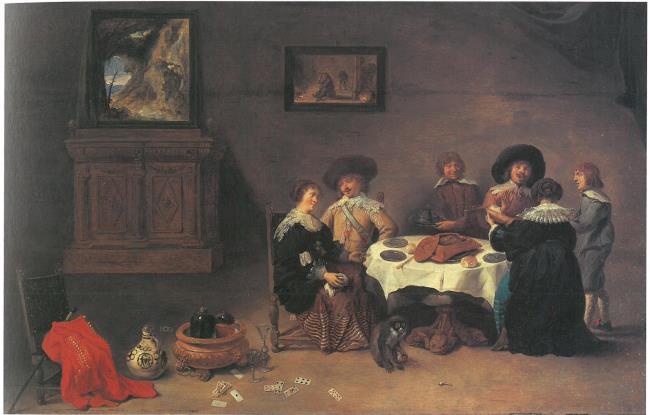 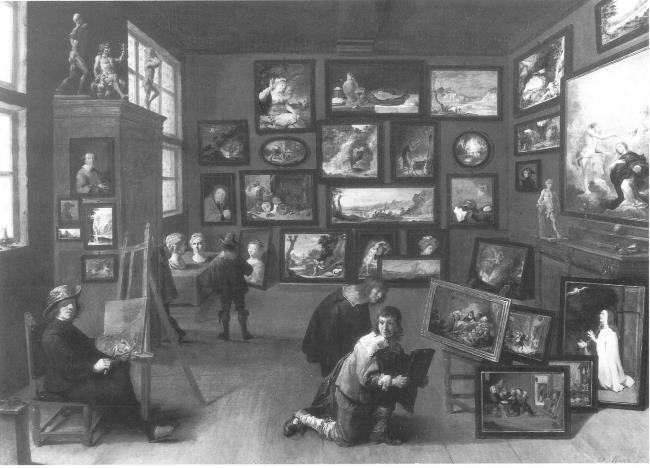 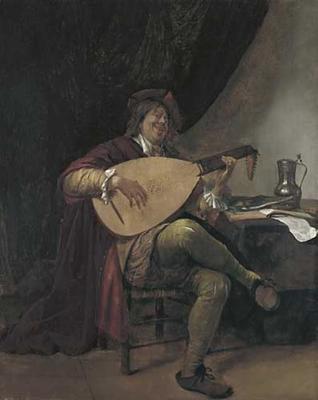 1 ‘Ditto [= David Teniers the elder]. A rocky Landscape, and a cavern; in the recesses of which a male saint is praying before a wooden cross.’

2 ‘Formerly described as representing a landscape with a hermit. In these two companion pictures (Nos. 34 and 35), the influence of the early Flemish School of landscape-painters, as for instance Paulus Bril, is to be noticed. This picture shows no trace of the younger Teniers’ influence. Teniers is here still independent of the style of his son.’

3 ‘Ditto [= David Teniers the elder]. Ditto [= A rocky Landscape]. Companion to the above [= DPG314]; in which a female saint, rapt in holy musing, is ruminating. A large opened folio is before her on the ground.’

16 According to the RKD photo, its pair was an Annunciation to Mary.

32 J. Hillegers in Tummers, Kolfin & Hillegers 2017, p. 168. It is debatable, but not improbable, that the Teniers grotto pictures were known in the Northern Netherlands. A recent article mentions only Dutch and not Flemish grotto pictures: see Rosen 2013. According to Piet Bakker several pictures by Teniers are recorded in inventories in Leiden: for instance that of Jan Jansz. van Rijn (1668), no. 133, lists Een rotse door Teniers (A rock by Teniers), Op te voorkamertje (in the little front room), and this could be a grotto picture (Erfgoed Leiden & Omstreken, archive notary K. Outerman, inv. 462, deed 268 – with many thanks to Piet Bakker).