DPG31 – Gipsies in a Landscape

TECHNICAL NOTES
DPG31 Gipsies in a Landscape
Single-member oak panel with horizontal grain; the edges are slightly bevelled. Buff colour ground. The panel is in good condition. There are battens on all four edges. The paint has slightly raised craquelure, particularly at the lower edge. Previous recorded treatment: 1953, conserved, Dr Hell.
DPG33 A Peasant eating Mussels
Single-member oak panel with horizontal grain. Panel has a pronounced convex warp. There is a small mended split at the top left. The paint film is in generally good condition. Previous recorded treatment: 1953, conserved, Dr Hell. 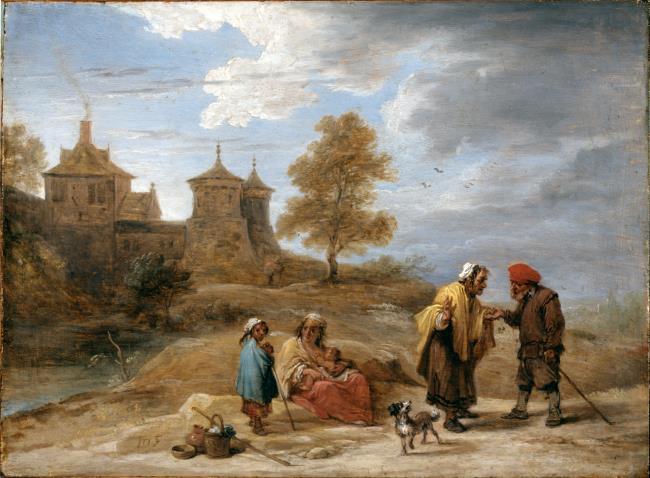 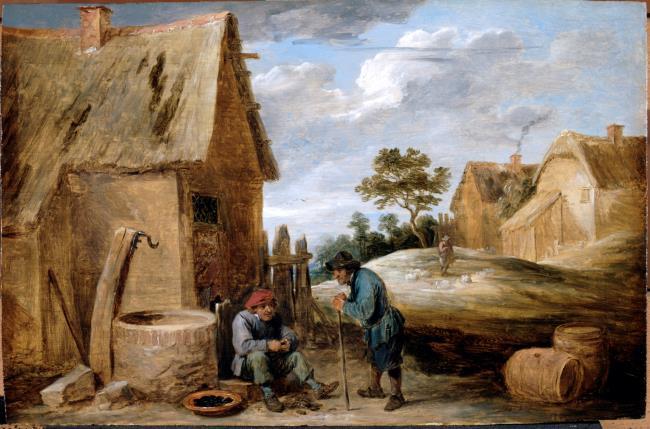 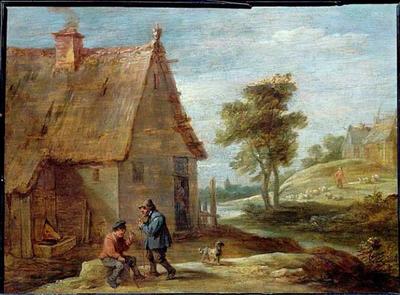 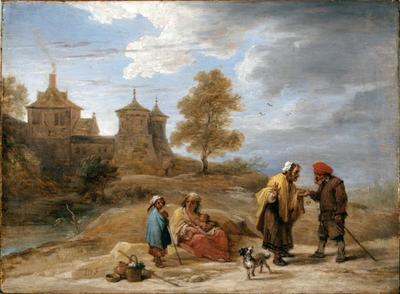 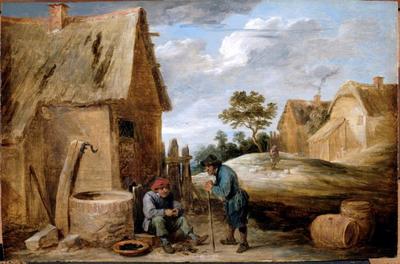 The gipsy fortune teller in DPG31 is a common theme in Teniers’ œuvre. There are two general types: in the first, more common, type, gipsies are set in a sort of grotto or cave, as in DPG314 and DPG323; in the second, as here, they are in a landscape. Gipsies were often considered a nuisance or even dangerous, but Teniers tends to see only harmony and peace. A larger gipsy scene in a landscape with more figures is in Karlsruhe (Related works, no. 1). The castle in the background seems as usual with Teniers not to be based on a real building,22 though the twin towers appear in a more elegant form in a drawing in Besançon, which was probably made from life (Related works, no. 2). There are similar castles in other Teniers paintings (Related works, nos 3 and 4).

In DG33, the peasant sits shelling mussels while his cottage is virtually falling down: the thatch has holes in it, the fence is in ruinous condition, and some piece of utilitarian farm equipment leans against the wall on the left. Although some modern scholars see these peasants as ‘idlers’ and ‘loungers’, such images of rustic neglect are probably meant not to comment on the idle and foolish behaviour of peasants but rather to suggest virtuous poverty or to idealize Arcadian peasant life.23

The dominant brown tonalities of the village and the ground contrast with the blue sky and white clouds, echoed by the grey-blue costumes of the two peasants in the foreground. A keynote is provided by the mussel-shelling peasant’s red hat; such a colour scheme is very typical of Teniers’ work. Concerning the costume, the historian De Marly commented that ‘the mussel eater’s flat hat is Tudor period [sic] in ancestry, for peasants maintained styles a century or more after the court had discarded them’; although these are Flemish and not English peasants, she is probably right when she states, ‘Peasants wore brown and grays, and the men either knee-breeches or trousers. A lot of trousers were worn below high society, by sailors and peasants […] Both men have doublets, which roughly approximate the modish shape but are devoid of any decoration.’24

Teniers painted several variations on the composition of DPG33. In Summer in the Louvre (Related works, no. 5) [1] the buildings and figures are very similar, and there is a woman in the door of her house; but the seated man is not eating or shelling mussels. In another picture (Related works, no. 6) the standing man is resting on his stick and the sitting man is
eating mussels, but the women are differently placed.

DPG31 and DPG33 may have been sold as a pair in Paris in 1776, although the description mentions a woman at the door of her house, who is missing from DPG33 but appears in the Louvre picture. The ‘pair’ may perhaps be recorded in Desenfans’ 1790–91 inventory of the house in Charlotte Street and his undated list of ‘Pictures to be sold’; then certainly in the Desenfans sale of 1795. They are absent from his 1802 catalogue, but may appear in the Insurance list of 1804. 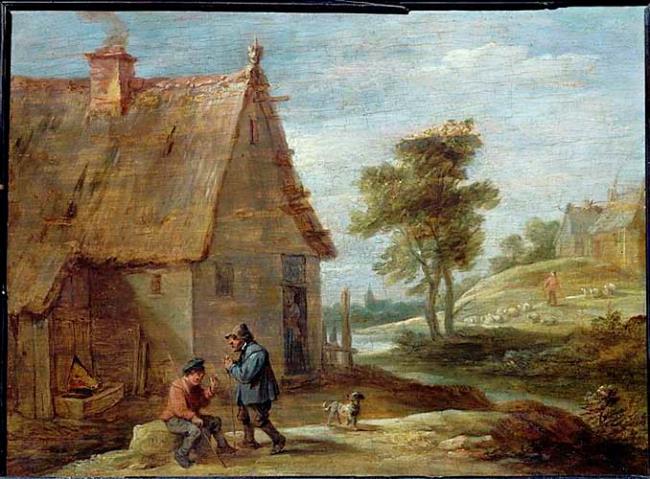 2 D. Teniers; ‘A landscape with a view of Vilvorden, and the villa of Teniers in the distance – the figures are gipsies telling a peasant's fortune – his true silvery tone of colouring, with a touch – light and transparent’; sold, 180 [?] Gs’ (copy in NAL). According to Wright (1999, p. 202), the sale was of the collection of M. La Prade, and the lot no. 61; however according to GPID (2 Jan. 2014), the collection was that of the painter Casanova. It seems more likely that Desenfans bought the pair from Lebrun after the 1776 sale.

3 The dimensions seem wrong, as auctioneers then (as now) gave height first.

6 ‘Teniers […] This is an excellent little sketch.’

7 ‘“An excellent little sketch” Engraved in soft ground by R. Cockburn.’ According to me this is a mistake; so far I have not come across such a print by Cockburn.

8 David Teniers I; ‘Nos. 61 [DPG33] and 155 are probably companion pictures; they are painted in the silvery tone of the younger Teniers, to whom they were previously ascribed; the dark outlines, however, are characteristic of the manner of the elder Teniers’; wrongly as engraved by Cockburn.

9 ‘The present picture is No. 169 in Smith’s Catalogue of the younger Teniers.’

11 It is not clear which of three pictures by Teniers is DPG33: no. 10, ‘Cottage and Figures. Painted with great appearance of truth, and is an excellent little specimen of the master’; no. 20, ‘Cottage with Figures’; no. 21, ‘Ditto.’ The other possibilities are DPG35 and DPG52. For Haydon’s comment on these pictures, see note 4 above.