TECHNICAL NOTES
Single-member oak panel with horizontal grain; the verso edges are slightly bevelled and bear paper tape residue. There is an inscription on the reverse: 200 sans bordure et en argent. The paint layers are thinly applied over the buff-coloured ground, and the entire surface has a very fine network of drying cracks. There is an old scratch in the paint surface just above the peasant’s head. Previous recorded treatment: 1866, ‘surface fixed’; 1994–5, cleaned and restored, N. Ryder.

This is an unusual work in Teniers’ œuvre, for he seldom produced such close-up views of animals. The composition balances the earthy subject matter with a composition that typically eschews a middle ground, so that the foreground figures appear as if on a stage. Nevertheless, he has not neglected the tonal values: the browns and greens of the foreground are balanced by contrasting blocks in the background. The promotion to a history piece by Richter and Sparks in 1880 (‘The Prodigal Son as Swineherd’) seems unfounded, as the Prodigal Son is usually depicted on his knees praying, or standing still, regretting his sinful ways. It would more plausibly be paired with a winter scene, such as the one in a German private collection (though not in a landscape format), in which a peasant is driving his two pigs through a winter landscape (Related works, no. 1) [1].

DPG146 seems to have a distinguished provenance. It seems to be first recorded in the collection of the French statesman Charles-Alexandre de Calonne (1734–1802) in 1788. It definitely appears in 1801 in the sale of the collection of François-Louis-Joseph de Laborde-Méréville (1761–1802), formerly Conseiller du Roi and Garde du Trésor Royal, whose aunt, Madame d’Harvelay, had married Calonne in 1788. Might Calonne have given her the Sow picture? In 1791 Laborde-Méréville purchased many of the works in the collection of Louis-Philippe-Joseph, Duc d’Orléans II (1747–93), to prevent their export from France, but had to sell them in England when he was forced into exile in 1792.9 The picture is presumably ‘A Landscape with Pigs’ purchased by Bourgeois at that sale in 1801.

This painting is one of fifty works in the collection chosen to be reproduced in a series of coloured aquatints published between 1816 and 1820 by Ralph Cockburn (Related works, no. 2) [2], artist and first keeper of the Gallery. It is also one of the few reproduced on a much larger scale, showing the appreciation that contemporaries had for this painting. Furthermore, the painting was still prized in 1905 when it was described in the Gallery’s catalogue (first published in 1880) as ‘the most brilliant and glowing in colour’ of all of Teniers’ paintings in the collection. 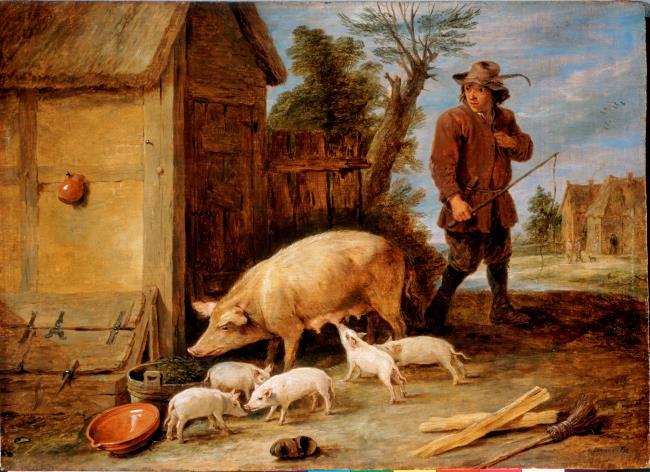 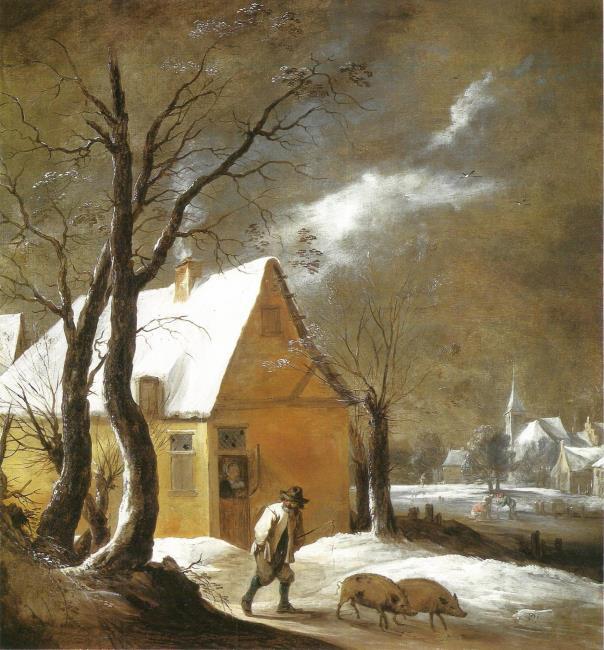 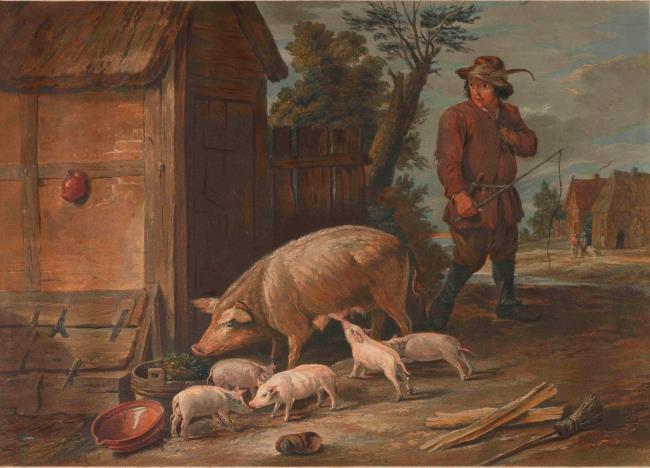 TECHNICAL NOTES
The original medium plain-weave linen canvas is lined onto a slightly coarser similar canvas; the original tacking margins have been retained at the top and sides, and possibly at the bottom. The ground is grey and displays some fairly large cupping, and there is some craquelure of the paint layers including a diagonal line of raised craquelure down the right side. There is some thinness and wear in the paint, especially on the buildings. There is a (retouched) diagonal score on the wall behind and to the left of the chaff-cutter, and some fairly extensive retouchings in the thatch of the cottage. The tonality of the entire image has dropped somewhat, darkening the buildings in particular and changing the balance of the image. Previous recorded treatment: 1870, ‘revised’; 1949–53, conserved, Dr Hell; 2000, cleaned and restored, N. Ryder.

The picture shows a Flemish farmyard. In the centre is a white horse eating hay, seen in profile; to the right a bald old man is cutting hay to make chaff; to the left are some chickens; beyond them is a woman dressed in red and blue standing in the doorway of a cottage. There are two more figures in the alley behind her, one of whom stands holding a shovel. Teniers had a stock of figure types which he would reuse again and again: the old man is not very different from his St Peter in DPG314. Lüdke considered that the picture was painted c. 1645, because of a painting with a similar bearded old man in a scene with horse trading in the collection of the Prince of Liechtenstein (Related works, no. 1) [3].

The subject of chaff-cutting is very rare in Netherlandish painting – as is the depiction of work in general.26 According to Kettering only three 17th-century canvases show a chaff-cutter: DPG142, and two pictures by Caspar Netscher (c. 1636–84), who is otherwise known for his images of the higher classes.27 In one, in Philadelphia, we see the chaff-cutter on a farm, with figures who are probably his family (Related works, no. 2a) [4]; the other, in the Rijksmuseum, concentrates on the figure itself (Related works, no. 2b). In both the worker looks out at the viewer. Kettering places these pictures in a tradition of farm scenes with working people that started in Rotterdam and spread southwards. Netscher had probably been inspired by an earlier image by his master Gerard ter Borch II (1617–81) depicting another modern mechanical device, The Knife-grinder’s Family (Related works, no. 2c). Lüdke suggests that Netscher’s picture may have an allegorical meaning, alluding to the saying ‘separating the wheat from the chaff’.28 In that case the working farmer would represent Prudence.29 Gudlaugsson connected the image by Ter Borch of a grey horse in a stable, loosened from its bridle and being brushed (Related works, no. 3), to a 1601 German book which gives the meanings of animals. There a saying by Seneca is quoted: a golden bridle does not make a horse more noble than it is by itself.30 No one should dress up or be proud of their ancestors. Applied to the Ter Borch picture, where the horse’s coat is being brushed, it could mean that the brushing is done to bring out the horse’s inner nobility, and also be an admonition to modesty. Is The Chaff-cutter primarily a charming picture of idealized peasant life, or does it have a meaning comparable to that of the Ter Borch picture? Teniers is known to have moralizing messages hidden in his pictures, and the bridle lies very prominently on the foreground. However in the other picture the horse is being brushed, whereas in DPG142 it is just eating its fodder. 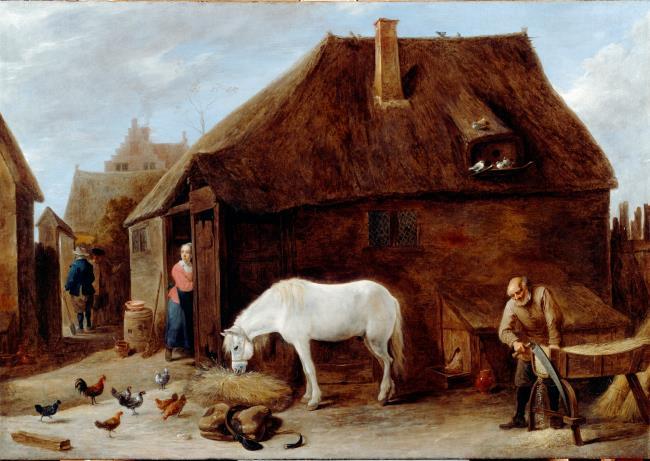 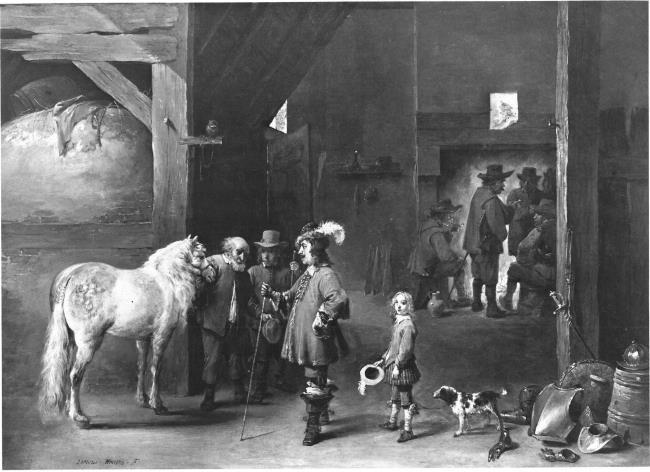 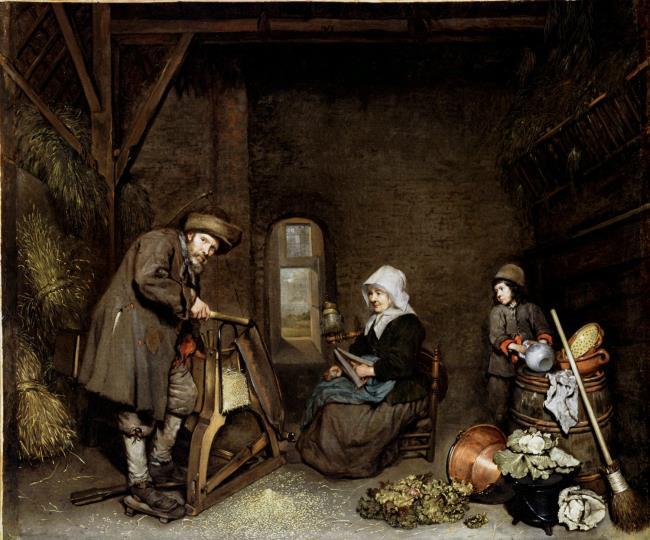 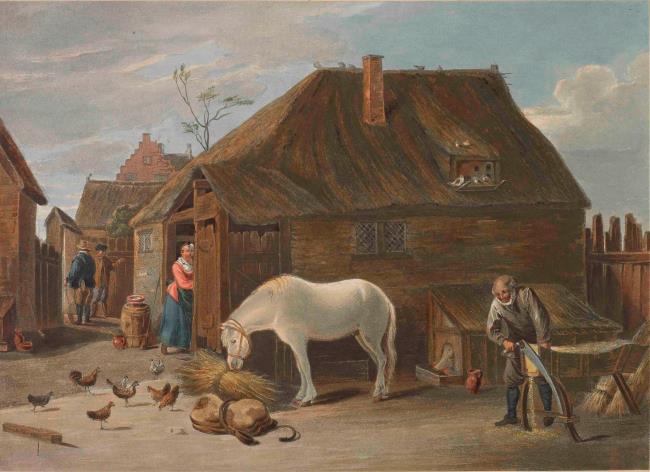 6 ‘The Prodigal Son as Swineherd’; ‘Of all pictures by Teniers in this Gallery, the most brilliant and glowing in colour’.

10 According to Haydon 1817 (see note 12 below), repeated by Denning 1858 and 1859, Sparkes 1876, and Murray 1980a. We could not find a collection or a sale of Charles James Fox (1749–1806). Peter Humfrey informed me that Fox was, ‘apart from politics, mainly interested in literature and history, but even the well-known bust of him by Nollekens, of which many versions exist, seems to have been commissioned by a political ally, not by himself. So any collection is likely to have been minor.’ Email from Peter Humfrey to Ellinoor Bergvelt, 28 June 2018 (DPG142 file), for which many thanks.

11 GPID (26 Sept. 2018): Teniers; ‘A Flemish Farm Yard with the White Horse, one of the finest silver-toned Pictures of this Master’. Handwritten note in a copy of the catalogue in the Frick Library, New York: ‘nr 3 2¼’ (i.e. 2¼ x 3; however that doesn’t correspond to the metric dimensions given above and to the ones given in Britton 1813).

12 ‘David Teniers the younger. Cottage, with a white Horse, and a Chaff-cutter. This exquisite picture formerly belonged to the late Rt. Hon. Charles James Fox, and is a proof of his fine taste in Art [but see note 10 above]; the old white horse, the poultry, the loose straw, the flying chaff from the chaff engine, &c. are nature itself, painted at once in a most powerful and effective style; the picture is as fine a production of the pencil as ever was seen.’

13 ‘first pointing out the Chaff-cutter (156) as perhaps the finest (though not the most striking or ambitious) picture of Teniers in this collection’.

14 ‘Teniers had several styles, and none in which he did not excel; but he had one style which was his exclusively and “par excellence:” and the exquisite work before us is a rich and inimitable specimen of it. […] What, for example, can surpass the character displayed in the white pony which occupies the centre of the scene? The pig, just poking his head out of his sty, and crunching a carrot in the most piggish manner, is equally fine and true. It is the same with the smallest minutiae of this admirable work: the particles of chaff that are falling from the chaffcutter's knife are actually in motion; there is evidently not a breath of wind stirring, or you might expect to see them blown away as they fall! The purity and sweetness of tone which pervades this picture is also delightful; and it may altogether be offered as a most characteristic piece of the master.’

15 ‘A View of a Farm-House, with its adjacent barns and yard. A man cutting chaff, a white horse feeding near him, and a variety of poultry, give animation to the rustic scene. An excellent picture, abounding with natural expression. 1 ft. 10 in. by 2 ft. 2 in. – P[anel]. (about). Engraved, modern [Cockburn?]. Collection of Richard Walker, Esq. 1803; 110 gs. Now in the Dulwich Gallery.’

19 ‘This beautiful example of Tenier’s [sic] later work was bought from the collection of Richard Walker, Esq., in 1803, for 110 guineas. It was formerly in the collection of the Right Hon. Charles James Fox.’ (For the latter, see note 10 above.)

26 See DPG57 for brick-making, and its Related works, nos 2–6, for other depictions of people at work.