Antwerp, baptised 15 December 1610–Brussels, 25 April 1690
Flemish painter of works to his own design, and of copies, miniatures, and staffage in pictures by others; printmaker; draughtsman; designer of tapestries; and art dealer

The specialities of David Teniers II as a painter were interiors of taverns, scenes with alchemists or monkeys, landscapes with many figures, often feasting, and scenes set in grottoes, usually with hermits and saints (e.g. DPG314 and DPG323). He was the oldest son of the painter David Teniers I (1582–1649), who worked in the tradition of Adam Elsheimer (1578–1610), and was apprenticed to his father at the latest in 1626, the date of their collaboration on a cycle on the history of Troy. In 1632 or 1633 he was registered as a master of the Antwerp Guild of St Luke. In 1635 he travelled to England, where Chrysostom van Immerseel commissioned a cycle of twelve paintings on religious themes; in 1638 these were sent to Seville. On 22 June 1637 in Antwerp he married Anna, the daughter of Jan Brueghel I (‘Velvet’ Brueghel; 1568–1625); Peter Paul Rubens (1577–1640) was a witness to the wedding. In 1638 their first son was born, David Teniers III (1638–85), who would also become a painter. In 1644 David II was appointed Dean of the Guild of St Luke for 1645–6.

In 1647 he received commissions for paintings for the new Spanish governor, Archduke Leopold Wilhelm (1614–62). In 1651 he moved to Brussels and was appointed court painter, a function he continued to hold under the next Spanish governor, Don Juan José de Austria (1629–79). In 1655 he became ayuda de cámara (valet). His most important task was to be keeper of the Archduke’s famous collection of paintings, which he depicted in some ten ‘gallery pictures’ – a characteristic Antwerp genre, where the walls of an interior are filled with pictures which are very often recognizable [2]. At his own expense in 1660 he published the collections of Archduke Leopold Wilhelm in Theatrum Pictorium [3-4], the first illustrated catalogue of paintings, making small painted copies [5]after which 244 prints were made.1 The original pictures are now in the Kunsthistorisches Museum, Vienna [6]. In 1662 Teniers bought the country estate Drij Toren (Three Towers) near Vilvoorde, one of his attempts at becoming a nobleman, at which he succeeded in 1663. After some time he established an academy in Antwerp, which started to function in 1665. After the death of his first wife he married Isabella de Fren, whose sister was married to Erasmus Quellinus II (1607–78) – there were many artists in Teniers’ circle. In 1685 his son David died. In 1690 he died in Brussels, and was probably buried in St Jacob op de Koudenberg, in the Koningsplein.

At first Teniers was influenced by several Dutch artists: from the brothers Cornelis Saftleven (1607–81) and Herman Saftleven (c. 1609–85) he derived the idea of prominent still lifes in the foreground of his interiors. His landscapes belong to the tradition of Antwerp artists such as Joos de Momper II (1564–1635), Paul Bril (1553/4–1626) and Frans Francken II (1581–1642). The greatest influence was that of Adriaen Brouwer (1603/5–38): the two artists’ pictures of taverns with drinkers, card-players, and smokers are almost indistinguishable. Through his father-in-law, ‘Velvet’ Brueghel, he was (re)introduced to the tradition of Pieter Bruegel I (1526/30–69), with scenes of peasants at fairs and in winter settings, and he adopted the same moralizing tendencies.

Teniers was a very prolific artist. He is credited with more than a thousand compositions, and there are probably thousands of 17th-century copies. Smith in his Catalogue raisonné volume of 1831 listed 686 works, and in 1842 a further 218, making a total of 904. Teniers’ designs were also used for tapestries. We know little of the structure of his workshop. Names of some pupils and assistants are known, including Gillis van Tilborgh II (c. 1625–c. 1678), Mattheus van Helmont (1623–after 1679), and his own sons – the earlier mentioned David III, and Abraham Teniers (1629–70). Many preparatory drawings by him survive, part of the stock that every artist had on which to base painted compositions: a number of figures recur (a woman entering a house, a farmer talking, a boy handling armour), and also buildings, facing both left and right. Important exhibitions have recently been organized, with accompanying catalogues, but no new œuvre catalogue has yet been published.

For a long time David Teniers II’s work was confused with that of his father. The 1953 Dulwich catalogue lists 15 paintings by the father and 7 by the son. The problem was partly solved by the monograph on David Teniers I by Duverger and Vlieghe (1971), who considered that the Dulwich attributions were completely wrong.2 As a consequence of that publication Murray in his 1980 catalogue listed 13 paintings by David II, one attributed to him, one ‘Teniers’, two attributed to ‘David Teniers I or II’, and one to ‘Studio of Teniers II’.3 According to Beresford in 1998 all the Dulwich pictures are by David II, except for 5 studio works (DPG107, DPG109, DPG321, DPG341 and DPG614) and two by imitators (DPG35 and DPG299). In the present catalogue DPG622, formerly assigned to the Dutch School, is placed in the circle of Teniers, as is DPG299, and it is suggested that DPG35 might be by David II, but its very bad condition makes that impossible to ascertain.

David Teniers II’s work was immensely popular. Hundreds of prints were made after his designs in the 18th and 19th centuries in France, England, Germany, Italy, and the Netherlands.4 And as a matter of course his works – often in large numbers – featured in all the famous 18th- and 19th-century collections, such as the British Royal Collection; and major national museums and galleries in Paris, Madrid and Vienna still have dozens of paintings by him. The inventory of the house in Charlotte Street where Desenfans and Bourgeois lived, published in the Evening Mail (1790–91), lists a Teniers Room with 32 pictures (next to rooms dedicated to the Dutch artists Nicolaes Berchem (1621/2–83), Philips Wouwerman (1619–68) and Aelbert Cuyp (1620–91) and the Frenchman Claude-Joseph Vernet (1714–89)). In addition, two large paintings by Teniers (probably DPG76 and perhaps DPG95)5 were displayed in the Drawing Room, with many landscapes and Biblical and mythological scenes by Flemish, Italian and Dutch masters (one of the other large pictures was Samson and Delilah by ‘Rubens’ – now Van Dyck, DPG127). Of these 34 Teniers pictures 21 still featured in the Britton inventory of 1813. The house was then in disarray, but the 21 pictures seem to have been spread over more rooms than the 34 in 1790–91: Britton records 7 Teniers in the Drawing Room, 5 in the Upper Room and its closet, and 4 ‘Unhung’.6

All these paintings, and prints made after them, had a great influence on later artists. Two examples in Great Britain around 1800 are Joseph Mallord William Turner (1775–1851), with such works as Sun rising through Vapour: Fishermen cleaning and selling Fish (before 1807, NG479), and especially Sir David Wilkie (1785–1841), whose interiors of taverns and farms, such as The Blind Fiddler (1806, Tate Britain, N00099), show that he had looked carefully at Teniers.7 That people at the time saw similarities between Wilkie and Teniers appears from Patmore’s British Galleries of Art of 1824.8

Sometimes it seems that the early 19th-century writers about Dulwich still had 18th-century eyes. In 1836 the German art historian Johann David Passavant (1787–1861) began his description with ‘Many excellent pictures by D. Teniers, Ph. Wouvermans, Cuyp, W. van de Velde, Joh. Both, Ruysdael, Ostade, &c. are to be seen here’9 – making the Dulwich pictures sound like an 18th-century French collection. In 1816 Ralph Cockburn (1779–1820) made 5 of his 50 Dulwich aquatints after pictures then thought to be by Teniers.10 However Patmore in 1824 and Waagen in 1854 mention only one: The Chaff-cutter (DPG142). The RA still chose six Teniers paintings to be copied by its pupils between 1840 and 1887.11 And Allport in his description of Camberwell in 1841 says ‘There are several pleasing pictures by Teniers’ in the Dulwich Gallery. However the pictures most popular with copyists, who came to Dulwich between 1879 and 1919, included none by Teniers.12 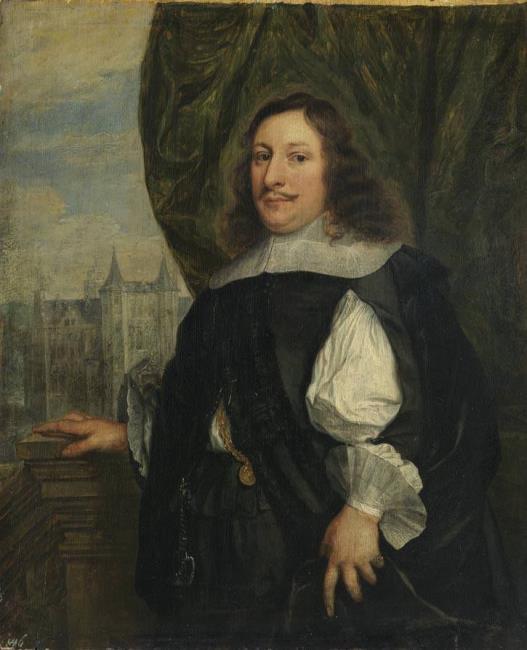 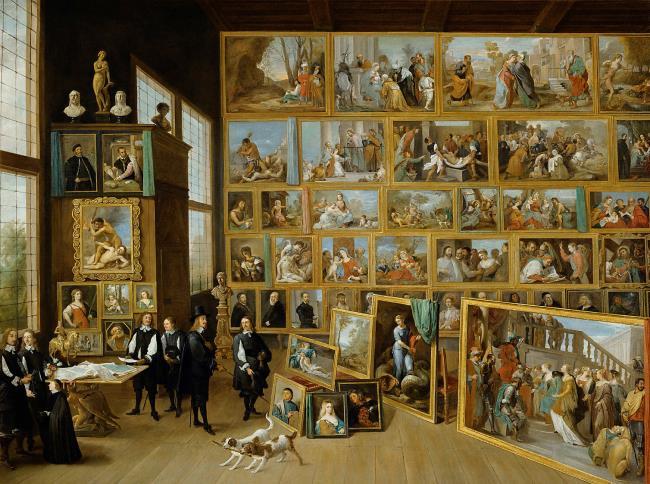 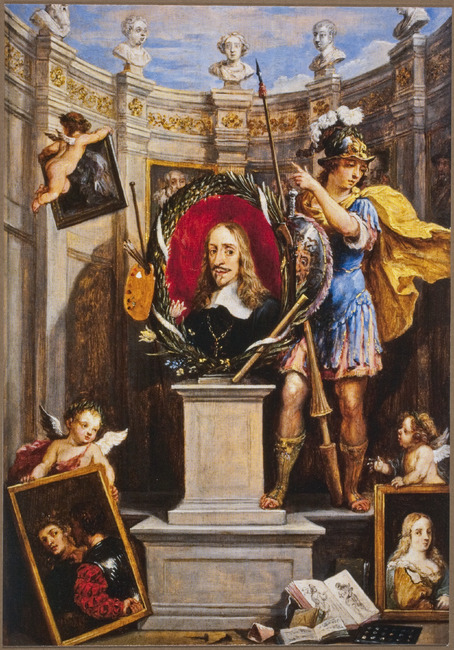 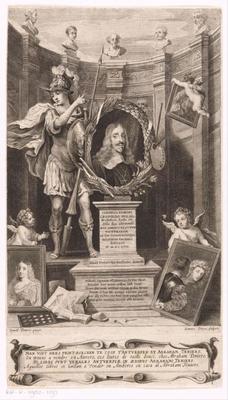 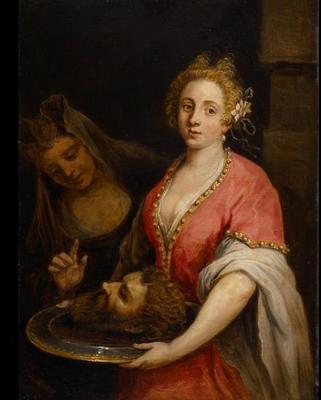 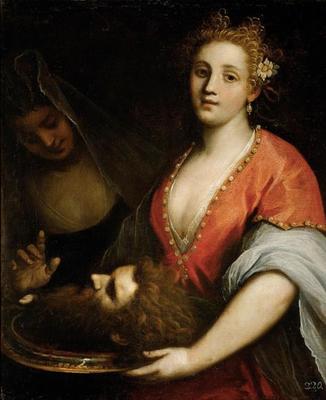 3 DPG14, until then David Teniers I, was moved to Flemish School.

5 See the two possibilities for the provenance of DPG95; it could also be that that it was not DPG95 that hung in the house in Charlotte Street but another large picture, which Desenfans later sold to Lord Lansdowne. See also, under DPG95, notes 22 and 31.