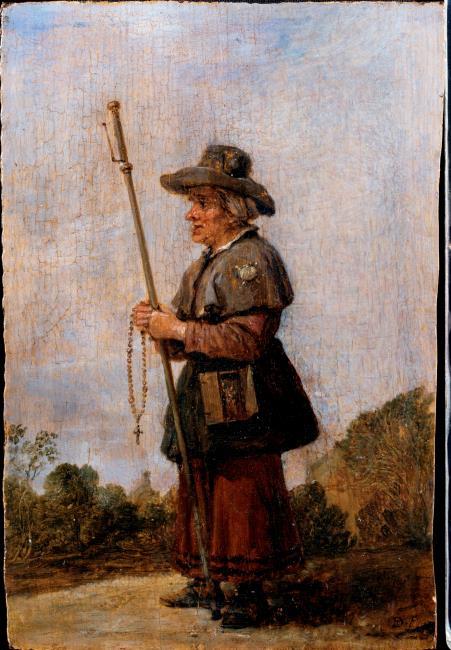 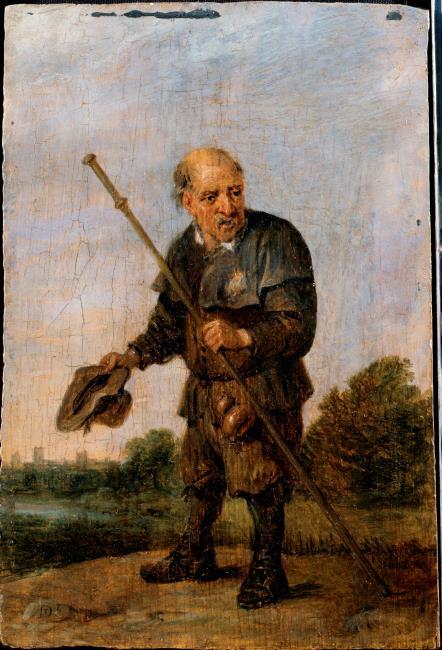 TECHNICAL NOTES
DPG107 Female Pilgrim
Single-member oak panel, bevelled on the verso edges; the support is sound with a few wormholes on the left side. There is a large filling inside the left edge of the panel. The predominantly vertical craquelure is slightly raised in many places and has an intrusive appearance, especially on the sky where it darkens the appearance of the light-coloured paint. The sky is slightly abraded due to past overcleaning and bears much past retouching, particularly in the area to the right of the figure (this extends down into the landscape). The surface of the painting is matt with some shiny patches and has a slightly grainy appearance. Previous recorded treatment: 1953–5, conserved, Dr Hell.
DPG109 Pilgrim
Single-member oak panel, bevelled on all edges. Warm buff ground. The ground has some low blisters, and a large filling in the right side of the panel extends from top to bottom. The craquelure is particularly disturbing in the sky, and there are various old retouchings in the sky and landscape that are discoloured and appear glossy, and some of which have been overpainted. The painting has been overcleaned in the past and the cottages against the horizon are fairly abraded. Previous recorded treatment: 1953–5, cleaned and retouched, Dr Hell.

Teniers, a Catholic artist, gave grandeur to the humble figures of pilgrims and their actions by depicting them full-length and outdoors. As the Eighty Years’ War, or Dutch War of Independence, drew to a close in the mid-17th-century, the act of pilgrimage underwent a revival among the common people of Flanders, and Teniers seems to be reacting to this. Indeed, many of the figures asking for directions at taverns, or alms, in his œuvre may be pilgrims (see for instance the pair on DPG112).

DPG107 depicts a female pilgrim in a landscape, wearing heavy clothing and holding a staff and rosary; on her grey cape is a pilgrim badge; on her belt is a small portable religious sculpture, with wings to protect it. The picture is related to a drawing in Berlin (Related works, no. 1) [1], and a similar head of a female pilgrim, holding a coin, was in Amsterdam in the 1920s (Related works, no. 2). The woman in DPG107 looks very much like a figure in a series of five etchings of pilgrims by Teniers, in reverse (Related works, no. 3c) [3]. In the painting she has acquired a pilgrim badge, and what was a water gourd has become a triptych. The exact relation between the print and the picture is not clear. Teniers probably made the first versions of the paintings as models for the prints, and then he and his studio produced many copies of both paintings and prints. These are most probably later versions by the studio.

DPG109 shows a bald old pilgrim doffing his hat, perhaps to ask for alms. He too holds a staff and wears a grey cape with pilgrim badge; from his belt hangs a water gourd. His figure also occurs, again in reverse, in the same series of five etchings by Teniers (Related works, no. 3a) [2]. The differences are greater here: in DPG109 he is full-face, whereas in the print he is almost in profile; in the print he has a shell-like pilgrim badge, whereas in the painting the badge seems to be made from another material; and his staff too is different. Again, the relation between print and painting is unknown. The same pilgrim is depicted in a painting in Dunkirk, possibly after the print (Related works, no. 3b). Two pictures of pilgrims in the Ashmolean Museum, about the same size as the DPG pair and painted in a similar rather crude style, are considered to be by the master himself (Related works, no. 4). They seem to be painted somewhat more proficiently than the ones in Dulwich. The figure in An Old Man holding a Long Wooden Staff (Related works, no. 5) [4] holds a different staff but has the same hat in his right hand; he is depicted in front of people sitting in a tavern, doing nothing. Klinge suggests that Teniers here intended the message that poverty would be the result of such a slothful way of life.10 Although the line dividing beggars and pilgrims seems to have been thin at the time, probably no such message was intended by Teniers (or his studio). 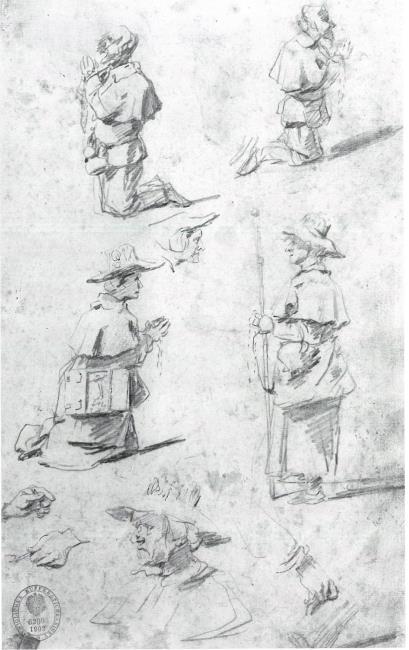 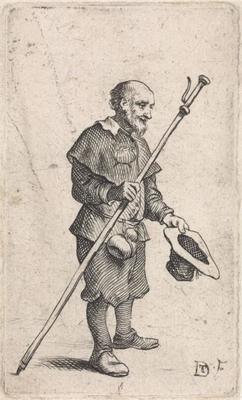 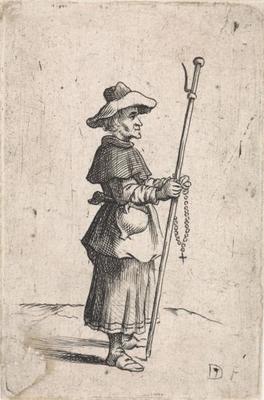 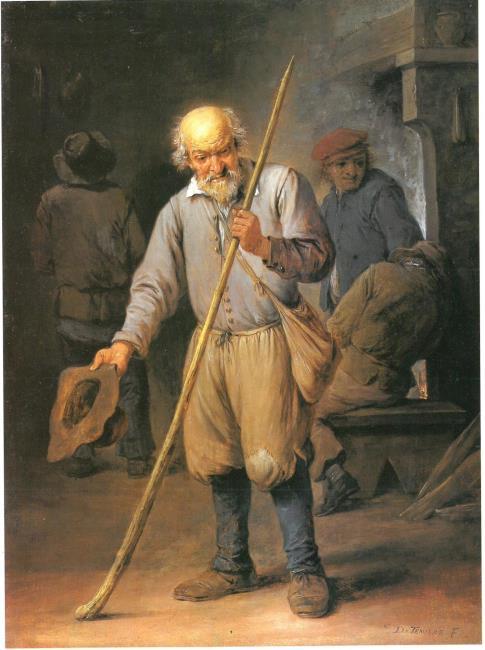 1 ‘David Teniers the elder. A Woman walking with Beads in her Hand.’

3 ‘David Teniers the elder. Peasant with Hat in his hand.’