DPG112 – A Winter Scene with a Man killing a Pig

TECHNICAL NOTES
Medium-weight plain-weave linen canvas lined onto similar; fragments of the original tacking margins remain and have been incorporated into the picture plane. The weak tacking edges of the lining canvas have been strengthened with canvas webbing tape. There are many old tears, and some old dents and deformations of the canvas plane are evident in the sky. The stretcher (not original) is of an unusual construction, with diagonal crossbars supporting its main members. The canvas bears a preparation of a warm-brown ground with grey imprimatura, and on top of this the paint is thinly applied. Severe abrasion of the paint film has occurred in the past and there are numerous retouchings around the tears and losses, some of which now appear matt. Glazes appear to have been lost in the tree and foliage. There are some vertical raised cracks in the sky, some raised craquelure amongst the tree branches and in the crowd at the bottom left, and minor craquelure elsewhere. Despite all of its previous damage, however, the painting has a good appearance generally; it owes this largely to its restoration at the National Maritime Museum in 1982. Previous recorded treatment: 1933, glazing added to frame; 1945–53, conserved, Dr Hell; 1982, conserved, National Maritime Museum, C. Hampton.

This belongs to a tradition of depicting the slaughter of pigs in preparation for Christmas that can be traced back to mediaeval books of hours, and that was often associated with Winter in series of the Four Seasons. Such scenes were popularized in the 16th century by Pieter Bruegel, the grandfather of Teniers’ first wife. If Teniers did not encounter those compositions at home, or with his family, he certainly saw them in the collection of Archduke Leopold Wilhelm, of which he was the keeper.11 We do not know whether it was paired with a Summer, or formed part of a set of the seasons. It was probably painted in the 1660s.

An extensive winter landscape is dominated on the left by a row of houses, in front of which a group of figures are killing a pig. The butcher kneels on the animal, while a woman holds a pan to catch its blood. At the right a group of boys stand with straw faggots, to prepare the carcass, and a figure to the left of the butcher also holds faggots. In the background, a pair of pilgrims appear to be asking for alms at the entrance of another house. In the foreground to the right, near a tall tree that has lost most of its leaves, are two chimney-sweeps with long sticks.

The scene with the pig reappears, with some changes, in Winter in the Four Seasons series in ’s-Hertogenbosch (Related works, no. 3). The sweep with a long stick (as in DPG321) and iron scraper is a standard figure in Teniers’ pictures (e.g. Related works, no. 4) [3]. There is a drawing for the women in the middle in front of the last house, where they are clearly shown as pilgrims, like the figure in DPG107.12 The introduction of the row of houses at the left seems to be Teniers’ own invention, but the perspective is remarkably clumsy. The depiction of buildings was clearly not his forte: even in a prestigious cityscape such as the Grote Markt in Antwerp in Portrait of the Members of the ‘Oude Voetboog’ (Old Crossbow) Guild the architecture is flat and uninspired (Related works, no. 5), and the same is true of Brussels in Entry of a Princess (Related works, no. 6) and in DPG614.

There are some similarities between the composition here, with houses on the left, tree on the right, and a road starting in the middle and going off obliquely to the right in the background, and a winter scene with a peasant driving pigs through a village (Related works, no. 7) [4]. But winter landscapes are quite rare in Teniers’ work. 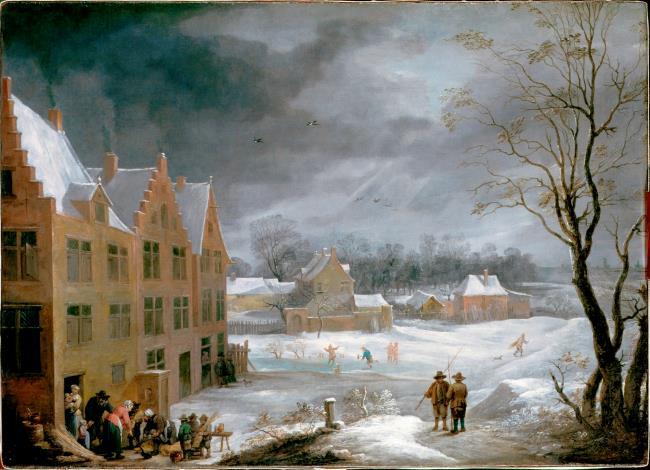 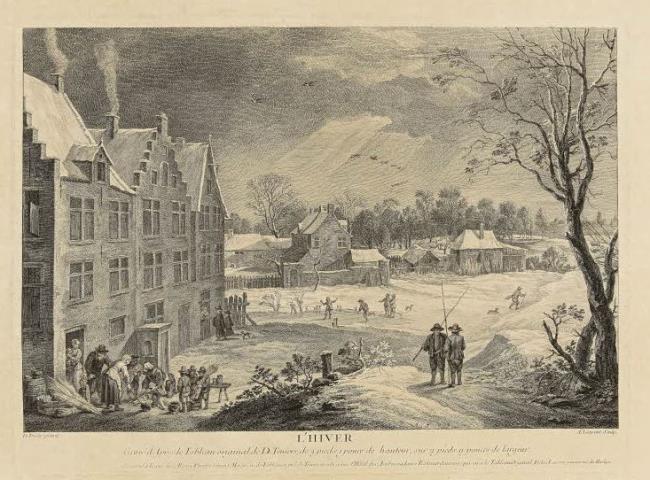 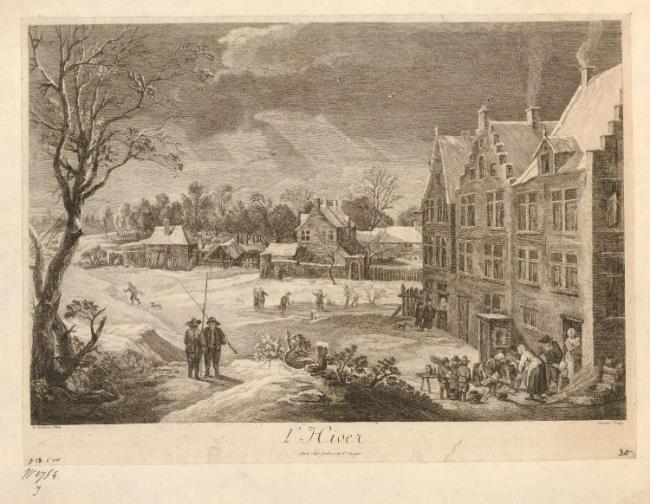 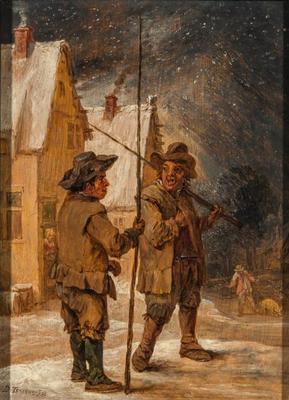 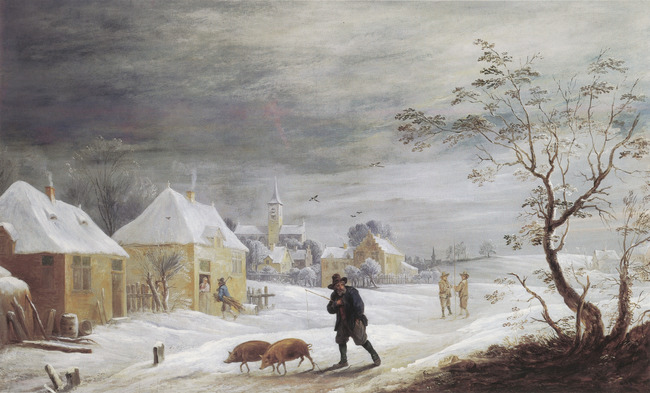 1 ‘David Teniers the elder. Winter Scene, with Figures skating on a Pond in the middle distance, encircled by a village: at one of the house [sic] on the right a group is occupied in killing a hog; the butcher is sharpening a knife; several boys have collected straw for its singeing, and an old woman is holding a frying pan. A very old man is leading a little girl to the right; and the door is occupied by a young mother and child. The stories are well told, and better painted, exhibiting a perfect picture of village life and scenery.’

2 ‘Teniers has repeated this disagreeable subject in another composition […] Engraved by Laurent.’

3 ‘a “Winter Scene,” by Teniers, ominously frosty and cold to contemplate, this autumn weather.’