Jan Frans van Son’s [1] father was the Antwerp painter Joris van Son (1623–67) or Van Zoon, who died before he could teach his son. Jan Frans was allegedly trained by the Antwerp flower painter Jan Pauwel Gillemans I (1618–75), but he is not mentioned in the Antwerp guild records. He may have left for England before he was twenty years old. According to archival sources, he produced many paintings in England, including many commissions from the nobility, such as Charles Robartes, Earl of Radnor, and also from Robert Streater (1621–79), the King’s Serjeant-Painter. He specialized in flower and fruit still lifes, some of which were of considerable size. 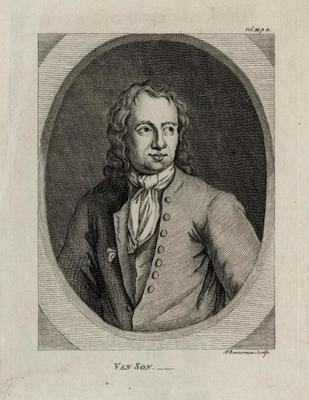 PROVENANCE
Possibly part of William Cartwright’s interior decoration?; Cartwright Bequest, 1686 (no. 85, £3, ‘A Long pictur of grapps peaches, & other frut with a Squerell in it, in a gilt frame’).

TECHNICAL NOTES
Medium–fine plain-weave linen canvas. Glue-lined onto linen. The light ground shows through the thinly painted (and abraded) dark passages. The background is particularly worn. The yellow and red glazes on the fruit may have faded or been damaged by overcleaning in the past. There are several signs of damage, particularly along the bottom edge, left side, and top corners. This painting has been attacked by mould in the past, affecting small spots of paint. Previous recorded treatment: mid-19th century, relined and new stretcher, Morrell; 1960, retouchings adjusted, National Maritime Museum; 1981, cleaned and revarnished, National Maritime Museum, C. Hampton.

DPG433 – Still Life with Fruit and a Bird

PROVENANCE
Possibly part of William Cartwright’s interior decoration?; Cartwright Bequest, 1686 (no. 86, £3, ‘a Long pictur of frut, & a bird in it, in a gilt frame’).

TECHNICAL NOTES
Fine plain-weave linen canvas. Ground is a light grey-brown. Glue-lined onto linen; the tacking margins have been cut. There is a repaired hole in the left background, two more at the bottom edge, and one in the vine-stem centre. It has been suggested that the glazes in the fruit may have faded, hindering the illusion of three-dimensionality. There is a fine craquelure all over and some small flake losses. Some abrasion has occurred to the edges of the painting. Previous recorded treatment: mid-19th century, relined and new stretcher, Morrell.

PROVENANCE
Possibly part of William Cartwright’s interior decoration?; Cartwright Bequest, 1686 (no. 87, £3, ‘A Long pictur with flouers, a Lobster an oring a glass of rinish wine a Lemon Cut, a Chinia dish with grapes & Appells in it, a chinia bason full of straberys, in a gilt frame’).

TECHNICAL NOTES
Fine plain-weave linen canvas. Buff-coloured ground with umber priming above. Glue-lined onto linen canvas. The paint layer is slightly abraded, but is generally in quite good condition. There is a horizontal scuff at the right side, next to the bowl of strawberries, which has a whitish appearance. Some of the retouchings have a matt appearance. It has been proposed that the ‘hectic’ look of the red drapery is due to the fading of glazes. Previous recorded treatment: mid-19th century, relined and new stretcher (stamp on stretcher), Morrell; 1988, surface cleaned and varnished, Area Museum Service, South East England. 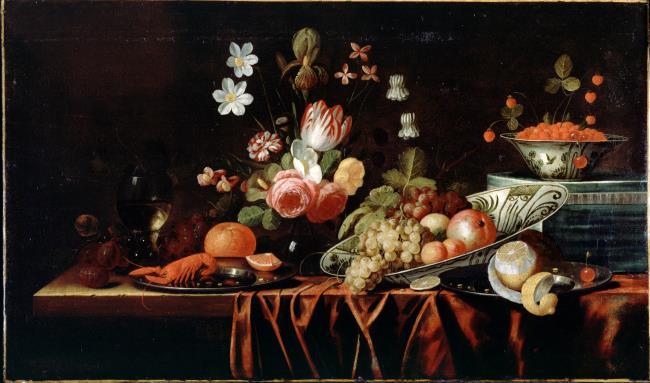 The three still lifes are by the same hand and come from the same collection (Cartwright). There are differences in their dimensions (DPG406 is some 5 cm deeper than DPG350 and DPG433, but they all have the same width) and composition (still lifes on table tops in DPG350 and DPG406, hanging festoon in DPG433), and they may have formed part of a larger set of interior decoration, possibly made for Cartwright’s home: with their shallow, wide formats DPG350 and DPG433 were probably intended for display as overdoors and DPG406 as an overmantel. DPG350 shows a range of fruits and vegetables (including figs, grapes, berries, plums, peaches and asparagus) on a table or ledge; at the right a red squirrel gnaws on a cobnut, while above it a small bird, a finch, swoops down on the display. The squirrel reappears in other paintings that are, according to us, by the same hand (Related works, nos 3 and 4) [4-5], of which two overdoors, formerly at Longleat (Related works, nos 2a, 2b), were probably painted for Thomas Thynne, 1st Viscount Weymouth, who died in 1714. In DPG406 precious Chinese export ware is displayed: a very large wan-li plate, a wan-li bowl, and at the far left a distinctive vessel known as a kendi. The tablecloth has stiff folds seen in other paintings (Related works, no. 6) [6]. The peaches and cherries in the Cartwright pictures are very similar to the ones in Related works, nos 1a, 1b [2-3]. 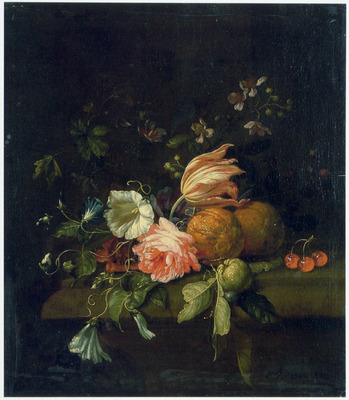 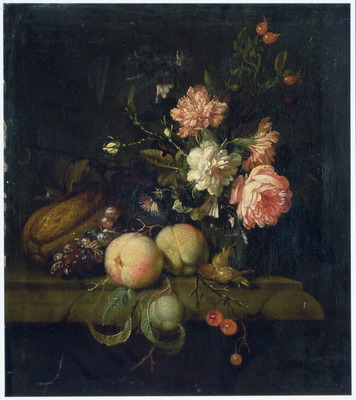 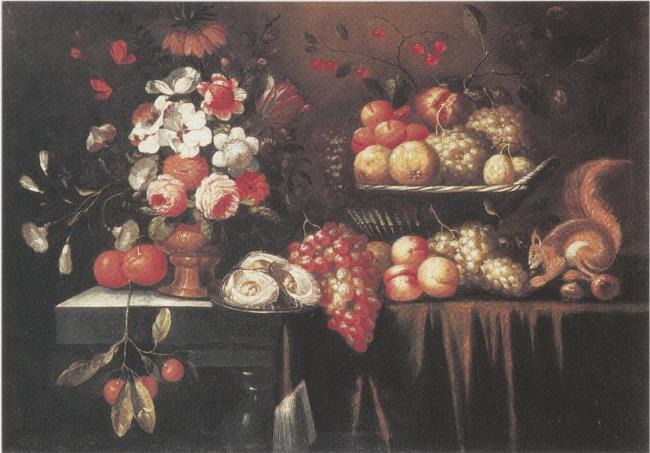 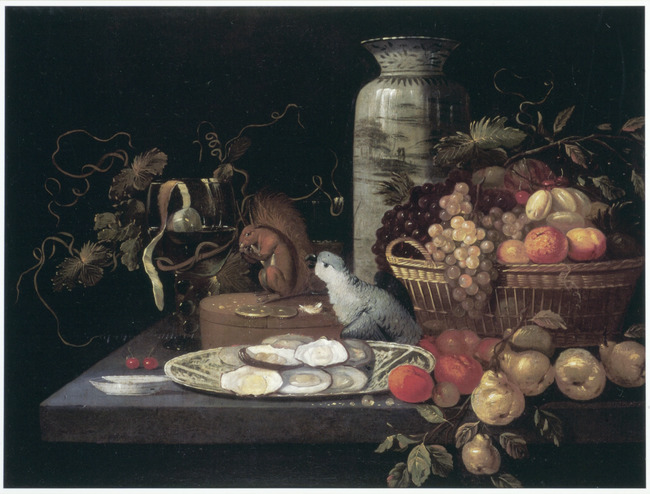 The three pictures were long unattributed, but in 1987 Ingvar Bergström attributed them to the Flemish painter Jan Pauwel Gillemans I (who was the teacher of Jan Frans van Son).8 In 1996 Fred Meijer of the RKD suggested that they were by a follower of Gillemans; more recently, he supported Paul Matthews’ suggestion of their attribution to the Pseudo-Simons (active c. 1650–80).9 This anonymous painter (the ‘real’ Simons being Michiel Simons II (?–1673), who worked in Utrecht 1638–73, has recently been characterized as a follower of Gillemans, and about a hundred paintings have been identified by Meijer. Many have appeared on the market attributed to Michiel Simons, but they are stylistically closer to Gillemans, Van Son’s teacher.

Alistair Laing noted in the inventory of Ralph Bankes’s collection at Grey’s Inn ‘A fruit Peece of Van Son’, and he drew attention to an overdoor at Kingston Lacy with fruit tied by a ribbon, which he thought looked ‘very close in both content and handling to your numbers 350 and 433’ (Related works, no. 7) [7-8].10 Because of Laing’s suggestion and also because they resemble the work of Joris van Son, the three Dulwich pictures are here attributed to Jan Frans van Son. He must have painted a lot of pictures and interior decorations in England, which have disappeared or gone unnoticed. It is also more likely that Cartwright had his house decorated with pictures made by an artist working in England than in Flanders, if they were indeed meant as decoration of Cartwright’s interior and not as part of his art collection. 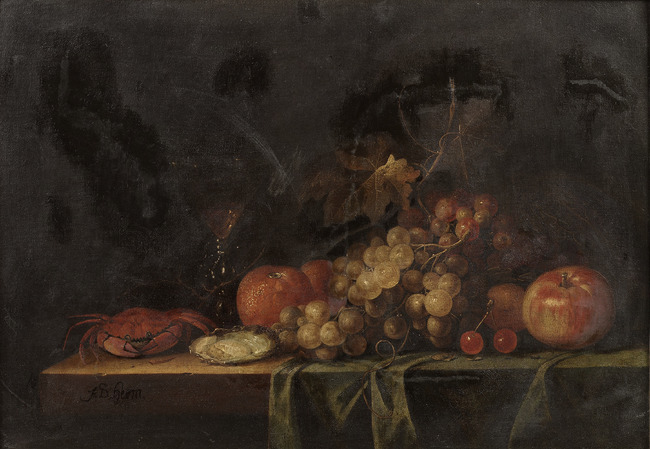 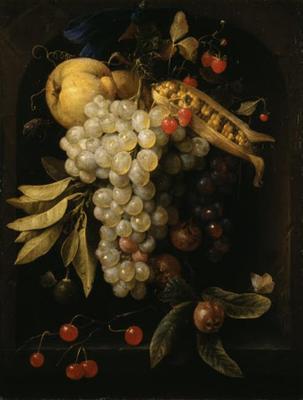 8 RKD, no. 299310: https://rkd.nl/en/explore/images/299312 (Jan. 30, 2021). Mentioned in a letter by Alistair Laing to Nicola Kalinsky, 30 July 1987: ‘I enclose a photograph of the painting by Joris van Son of fruit tied by a ribbon at Kingston Lacey [sic] [...]. It appears to be a picture that was mentioned in the inventory of Ralph Bankes’s pictures in Lincoln’s Inn in 1659 and is supposed to be signed and dated 1654, although I have not been able to find this. It is otherwise rather unlike the few paintings by Joris van Son that I happen to know, all of which are rather sumptuous and include lobsters! It does, however, look very close in both content and handling to your numbers 350 and 433.’ And in a following letter of 14 Aug. 1987: ‘Ralph Bankes’s inventory is not published; it consists of two slightly differing two-page lists of his collection when he was still at Grey’s Inn, one of them dated the 23rd December 1659. The Joris van Son is simply listed in one of them as, ‘A fruit Peece of Van Son’, bought for £3.10s. Both letters in the DPG350, DPG433 and DPG406 files. Laing was apparently somewhat confused, since he sent a photograph (made by the Courtauld Institute of Art) on the verso of which is written in pencil: ‘Dyrham overdoor’. The year 1654 that is mentioned in Laing’s first letter can be found on another picture by Joris van Son that is indeed at Kingston Lacy: see Related works, no. 7b.