Jan Frans Soolmaker worked in both the Northern and the Southern Netherlands. He painted Italianate landscapes and architecture. He is first recorded in April 1654, when he became a pupil of Jan de Bruyn van Aelst (c. 1619/20–65/6) in Antwerp. He did not finish his studies there, and he seems to have continued under Nicolaes Berchem (1621/2–83), reported by Dézailler d’Argenville in 1745 though in no other source. This would have been in Haarlem, but he did not join the guild there. It is likely that he became a member of the guild in Amsterdam, where in December 1665 his will was drawn up before an intended journey via Portugal to Italy; whether the trip was realized is not known. A signed Italian landscape bears the date 1668 (Mak van Waay, Amsterdam, 8 October 1973, not illustrated), which may be authentic; no other dated works are known.

It would seem that Soolmaker, who was one of the better workers in Berchem’s style, had a fairly short creative life; otherwise the biographer Houbraken would have heard about him in Amsterdam, and Italian sources would not be silent. Some of his works display themes and motifs inspired by or even copied from the Haarlem painter Philips Wouwerman (1619–68). This could point to an active period in Haarlem. However, several Antwerp painters of the second half of the 17th century show Wouwerman influences. So whether Soolmaker worked really in Haarlem remains uncertain.

TECHNICAL NOTES
Plain-weave linen canvas. The original canvas has an original vertical join (or possibly a fold line) just left of the centre. In the top-centre of the sky there is a large pentimento of foliage, and another of a cow behind the dun cow. Glue-paste lined. the canvas is very slack on the stretcher. There is mould and water staining on the reverse of the lining canvas. The original tacking edges have been incorporated during lining, enlarging its format. The paint is slightly cupped, and there are a few small bumps and deformations in the canvas plane. The dark foliage in the middle distance has fine drying cracks. The paint is worn and abraded and there is extensive repainting in this picture, particularly behind the cows. The discoloured varnish has been partially removed and the surface bears a thick coating of wax, giving the image a dull matt appearance. Previous recorded treatment: 1872, relined and varnished; 1936, frame paraffined; 1952–5, partially cleaned, Dr Hell; 1991, back cleaned, edges temporarily repaired, some surface wax removed, V. Leanse.

This is an Italianate landscape of the 1660s. It was catalogued in the Bourgeois collection in 1813 as by Cuyp, which at the time meant Aelbert Cuyp (1620–91); in 1859 Denning doubted the attribution, and suggested Aelbert’s father Jacob Gerritsz. Cuyp (1594–1652). In 1880 Richter and Sparkes demoted it to ‘Dutch School’. Although to modern eyes clearly not by Cuyp, the picture was considered good enough to occupy a central place in the passage to the dining room in Bourgeois’ house in Charlotte Street (a position also owed no doubt to its being rather large). It is reminiscent of Cuyp in its composition – a pastoral scene with an elevated foreground and a distant view to one side (cf. DPG4, DPG96) – but the curiously rather large herdsman and his cows and dog are quite unlike Cuyp. Comparison with two paintings by Jan Frans Soolmaker makes the attribution to him convincing (Related works, 1, 2) [1-2]. 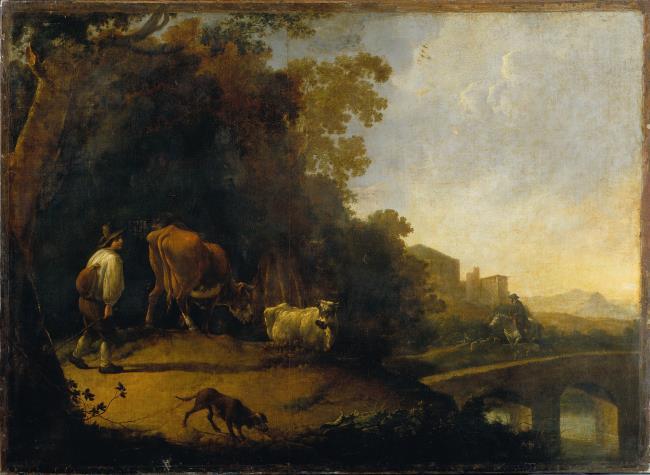 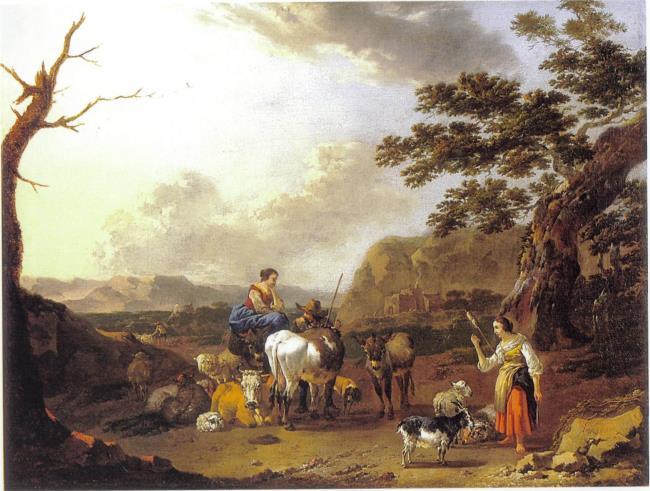 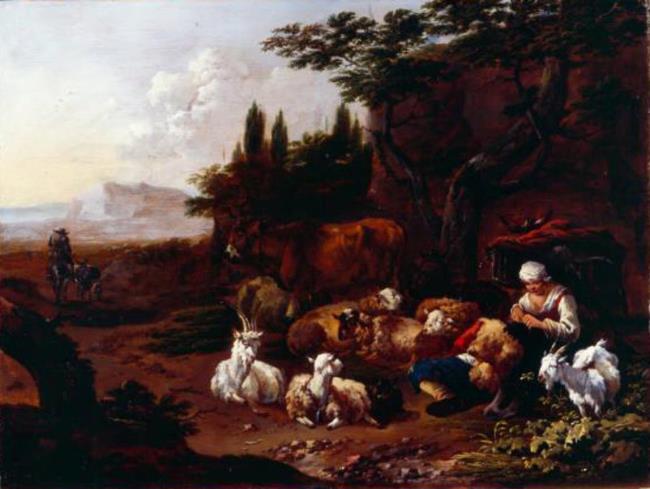 1 ‘Ditto [= Albert Cuyp]. A boy driving Cows forms the fore-ground; while a horseman coming over a bridge on the other side, forms the second distance. The water and reflections are natural and lucid; the herbage and plants in the fore-ground are beautiful; and the dog pointing at his game gives it additional interest.’

2 ‘Cuyp. This picture offers a fine and striking contrast to the last [= DPG348, Cuyp]; and it is difficult to look at or think of them both as the work of one mind and one hand […] There is a rich sombre tone of colouring pervading this picture, and a fine bold simplicity of composition and of handling, which correspond with and illustrate each other.’

3 ‘A beautiful picture, in a sketchy style.’

4 ‘Mrs Jameson calls this “a beautiful picture in a sketchy style.” But it is hardly equal to Cuyp’s best manner. It might be by his father, Jacob Gerritsz Cuyp (1575–1649).’

5 ‘Formerly ascribed to A. Cuijp, defaced by over-painting.’