Abraham Storck was the youngest son of the painter Jan Jansz. Storck (c. 1603–64/70), also called Sturck and later Johannes Sturck(en)burgh, a painter from Wesel in Germany. He received his early training from his father, who also taught his brothers, Johannes (1629–73), and Jacobus (1641–in or after 1687). Like them he specialized in marine subjects, topographical views and Italianate harbour scenes. He probably visited Italy at some point, as well as Germany, as he painted both Mediterranean ports and German scenes, for instance along the Rhine. In 1688 he first appears in the list of members of the Amsterdam Guild of St Luke. According to the 18th-century artist and biographer Arnold Houbraken, Storck depicted the official welcome in Amsterdam of John Churchill, 1st Duke of Marlborough (1650–1722) after his victory over the French at the battle of Blenheim on the Amstel in December 1704. Other festive occasions, with marine ‘parades’, such as the visit to Amsterdam of Tsar Peter the Great of Russia (1672–1725) in 1697, were among his favourite subjects. His extensive œuvre, much of it completed with the help of a large workshop, shows the influence of Ludolf Bakhuizen (1630–1708), Jan Abrahamsz. Beerstraaten (1622–66), and Willem van de Velde II (1633–1707).

TECHNICAL NOTES
Plain-weave linen canvas. Grey ground with pale underpaint in the foreground. Beva-lined onto linen. The original tacking margins have been cut. The paint bears old stretcher marks of a previous stretcher. There is weave emphasis in the paint and the foreground and the darker passages have suffered from overheating during the old lining. Overcleaning in the past has left the paint uneven and worn. There are many old paint losses in the foreground. The significant damage that the paint surface has sustained over the years, including losses, cracks and abrasion, has been restored to a level where it is subdued, but still visible on close inspection. Some overpaint, which it was not possible to remove safely, remains. Previous recorded treatment: 1953, Dr Hell; 1994, lined with new stretcher, cleaned and restored, S. Plender.

The picture shows an English yacht saluting a Dutch man-of-war in the Maas. The city in the background can be identified as Rotterdam by the presence of the Laurenskerk in the centre; far left, between windmills, is the steeple of the Schiedamse Poort. To the right of the windmills are the two gates that framed the Oudehaven, the Oudehooftpoort and the Oostmaaspoort. To the right of the Laurenskerk is the Oostpoort.9 The composition is known in numerous versions (Related works, nos 1–7). There seems to have been a pair, depicting the harbour of Amsterdam, comparable to the one featured at auction in 1910 in Amsterdam (Related works, no. 3).

The subject of the scene is uncertain, but a version with the Arthur Tooth and Sons Gallery in 1950 was then said (incorrectly) to depict the Duke of Marlborough’s visit to the Dutch fleet in the Amstel in 1701 (Related works, no. 7). In the centre middle distance can be seen two more British ships. In the foreground a rowing barge with eight passengers is drawing close to the shore and is being met by a number of figures. Its bows are painted with white swans on a blue background, while at its stern are a tricolour pennant with a diagonal white band across it and, below this, a red and white striped flag, the symbol of Hoorn or Dordrecht. The large ensign at the stern of the Dutch warship in the centre is that of the States General of the Netherlands, used from c. 1650, while the tricolour hoisted at the mainmast and the three lanterns on the stern indicate that an admiral is aboard. The red lions carved on the stern can indicate the Admiralty on the Maze, which was located in Rotterdam and which had a red lion in the logo.10 The English yacht, identified by the pre-1707 Union Jack, would also seem to be carrying an important person: the red ensign with a St George’s cross at the main mast indicates a senior admiral, while the other pennant indicates a commissioned ship. In the distance to the right are two further Dutch men-of-war, that in the foreground flying a Dutch ensign and with the flag of a red lion rampant on gold.

The composition, with a variety of ships at anchor, is typical of Storck’s usual manner. The small boat just off the foreshore, which leads the viewer’s eye into the picture, is a particularly characteristic feature. The large number of copies by Storck and his workshop suggest that the subject was thought to be significant. 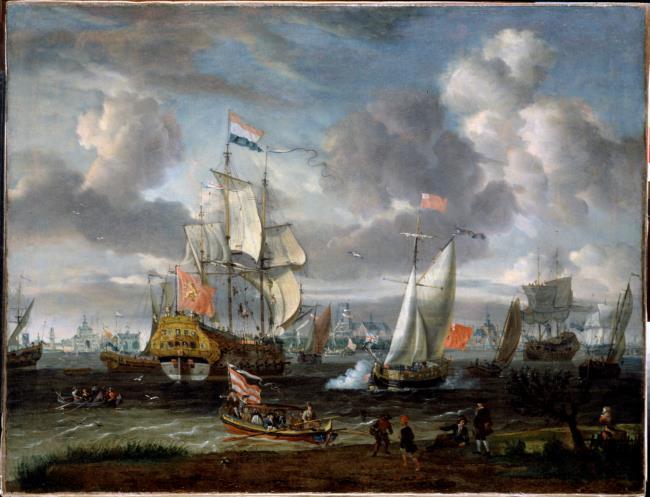 1 The PGC Minutes of 8 Dec. 1925 note that Dr Warters had offered several pictures to Dulwich but only DPG608 was considered sufficiently good to be acquired.

2 ‘The town is clearly intended to be Rotterdam, and an important personage is landing. The fact that the saluting ship has a pre-1707 English flag, whereas the others are Dutch, puts this in the class of paintings by Storck associated, probably wrongly, with Marlborough. The composition is close to one called Harbour of Amsterdam in Dresden, signed and dated 1689 [Related works, no. 8]. Several near-replicas are recorded in the Witt Library.’