Peter Snayers [1] was a pupil of Sebastiaen Vrancx (1573–1647), and became a master of the Guild of St Luke in Antwerp in 1612/13. Shortly after 1625/6 he moved to Brussels, where he became a citizen in 1628 and where he worked for Archduke Albert (1559–1621) and Archduchess Isabella (1566–1633). He was particularly noted for aerial depictions of the battlefields of the Thirty Years’ War (1618–48). With Peter Paul Rubens (1577–1640) he worked on a never completed series of the battles of Henri IV of France (1553–1610; see under Vrancx, DPG356, Related works, no. 5, Fig.).1 He was appointed court painter to the Cardinal Infante Ferdinand (1609–41), Governor-General of the Spanish Netherlands from 1634 to 1641. Ferdinand took steps after his arrival to distance himself from his clerical calling and to emphasize his military skills, and it is tempting to see his choice of the battle painter Snayers as part of this programme. Later Snayers also worked for Archduke Leopold Wilhelm (1614–62).

Snayers painted portraits and hunting scenes as well, sometimes in conjunction with Rubens, most notably for the decoration of Philip IV’s hunting lodge outside Madrid, the Torre de la Parada. He was a friend of Anthony van Dyck (1599–1641), who painted his portrait. Adam Frans van der Meulen (1632–90) was his pupil. Snayers was also a notable collector: the posthumous sale of his collection in 1675 included 427 paintings. 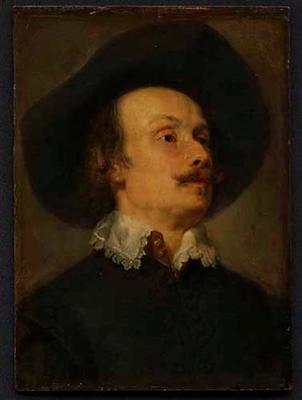 TECHNICAL NOTES
Plain-weave linen canvas. Thin cream ground. Glue-paste lined; the tacking margins are absent. There are several old tears and areas of damage, including one large tear towards the lower left side. The paint layers are in good condition but are rather abraded, particularly in the sky. The trees on the horizon have discoloured from green to grey and brown. Fading or abrasion on the horizon has made the distant hills too blue, and two houses in the far distance have almost disappeared. Previous recorded treatment: 1911, relined, Holder; 1953–68, relined, new stretcher, cleaned and restored, Dr Hell; 1980, surface cleaned, retouchings adjusted, revarnished, National Maritime Museum, C. Hampton.

Snayers specialized in scenes of skirmishes such as this, and was particularly skilled at imposing order on the chaotic battlefield. If depicting a ‘real’ battle, however, he took a bird’s-eye-view to give a clear picture of the events, with a high horizon, as Karel van Mander prescribed in his Schilderboeck (1604).6 DPG347 seems not to depict a real event, but rather to be the sort of decorative scene that Philips Wouwerman (1619–68) was to paint later in the Northern Netherlands, often including a white horse as an eyecatcher. Vander Auwera, though, thinks it was probably meant as a universal and unambiguous warning against the lethal dangers of war. Sennewald however seems to suggest, without further argument, that the Siege of Ypres in 1649 is depicted here.7

The inscription refers to Snayers’s position as court painter to the Cardinal Infante Ferdinand. Since he arrived in the Spanish Netherlands in 1634, the picture must have been painted in or after that year. According to Vander Auwera Snayers continued to sign himself thus after Ferdinand’s death in 1641; he notes that DPG347 is stylistically very close to a cavalry skirmish by Snayers in the Prado which is dated 1646 (Related works, no. 1) [2]. 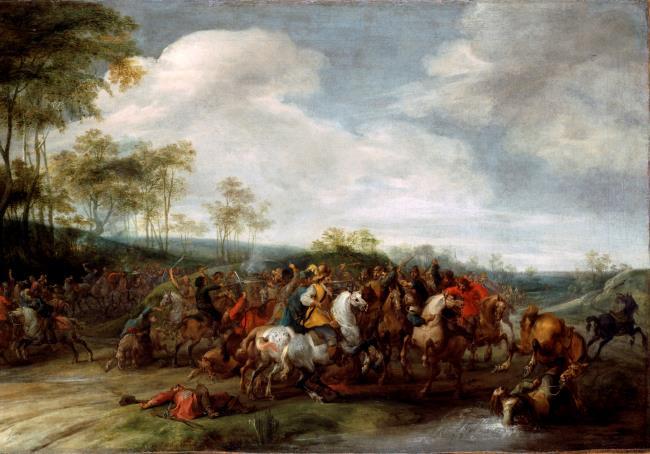 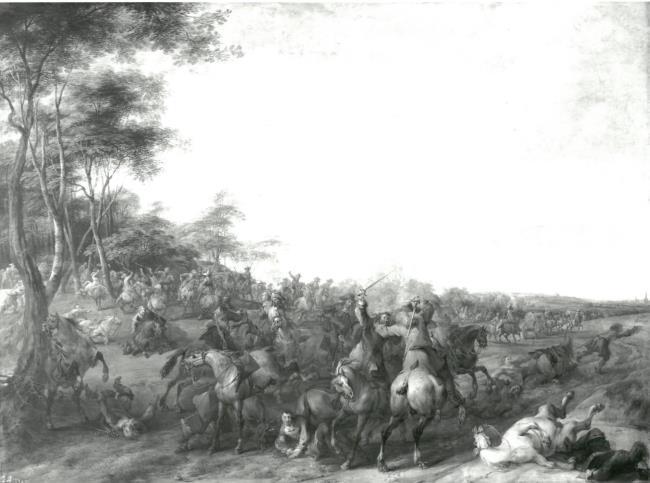 2 This signature seems to be a mixture of Spanish, Latin and Italian. In Spanish it should have been ‘Del Serenisimo Cardinal Infante Pintor’; in Italian ‘Del Serenissimo Cardinale Infante Pittore’; in Latin ‘De Serenissimi Cardinali Infantis Pictor’. With thanks to Matthijs Jonker (email to Ellinoor Bergvelt, 28 Jan. 2020; DPG347 file). Helen Hillyard confirmed that the letter after the capital S is an ‘e’ (see detail on RKD website, images no. 286585, ill. 1001639522), which is not correct in any of those languages.

3 ‘A clear and carefully painted picture, by this early but very meritorious landscape and cattle painter. (No. 45.)’

7 The Dulwich picture is illustrated under the heading ‘The Siege of Ypres 1649’, with the title Cavalry Skirmish.