Herman Saftleven was an extremely productive artist: over three hundred paintings, many prints, and more than twelve hundred topographical and landscape drawings by him survive. Many of his pictures are dated, showing frequent changes in style. Early works echo Pieter de Molijn (1595–1661) and Jan van Goyen (1596–1656), and Saftleven was also influenced by Abraham Bloemaert (1566–1651) and Jan Both (1615/22–52). In 1635 he collaborated on the painted decoration of the palace of Honselaersdijck for the Stadholder Frederik Hendrik, Prince of Orange (1584–1647), after which he started to paint Italianate landscapes in the style of Cornelis van Poelenburch (1594/5–1667). His paintings are among those by Utrecht masters collected by Willem Vincent, Baron of Wyttenhorst (1613–74).1 He also worked for Lady Alethea Talbot (1582–1654), widow of Thomas Howard, the above-mentioned Earl of Arundel.2

Saftleven’s œuvre consists mainly of genre scenes, riverscapes, and Italianate landscapes. From about 1645, however, he abandoned Italianate landscapes in favour of ‘Dutch’ views, and from about 1650 he produced imaginary Rhineland views. In 1667 he travelled to Basel in Switzerland. For Dutch collectors, c. 1663–6 he drew 37 sheets for the Atlas of Laurens van der Hem (1621–78) and made drawings of flowers and plants in the collection of Agnes Block (1629–1704) at her country estate, Vijverhof (1680 and 1682–4). Jan Vorstermans (1643–after 1693) was one of his pupils. Saftleven was very famous during his lifetime, and influenced several German 18th-century landscape painters. 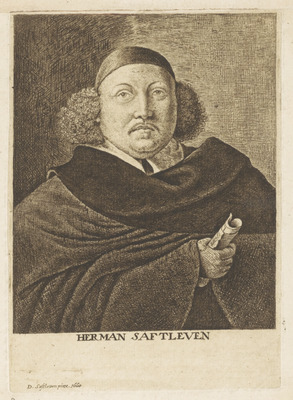 TECHNICAL NOTES
The single-member oak panel is in good condition with an almost imperceptible horizontal warp; its reverse bears the remnants of five black seals. The panel’s horizontal grain is visible through the paint in some places, and scattered retouchings are visible. There are two very small losses in the sky, to the right-hand side, and an old dent in one of the smaller boats in the middle distance of the Rhine. A little abrasion caused by the frame is evident at the edges of the panel and there are two losses along the bottom edge. There are some vestigial remnants of old discoloured varnish in the surface brushwork. Previous recorded treatment: 1879, cleaned, Reeve.

Until 1880, when the monogram was correctly interpreted, DPG44 was thought to be by Saftleven’s pupil Johannes or Jan Vorstermans, although Denning in his 1858 catalogue had already suggested Saftleven; he gave biographies of both Vorstermans and Saftleven.

As Schulz noted, the setting has not been identified, and it is possible that it is an imaginary landscape. Remmelt Daalder identified the long ships on the river Rhine and on the shore as samoreuzen: used for transport on that river, they were pulled upstream and sailed back.11 The painting was made soon after Saftleven began to produce Rhineland scenes c. 1650; the golden light of late afternoon in the sky reveals his assimilation of the Dutch Italianate school, most notably Jan Both, but his technique is far more detailed. Several paintings by Saftleven dating from the 1650s are compositionally quite similar to DPG44; perhaps the closest is one dated 1654 (Related works, no. 1) [2].12 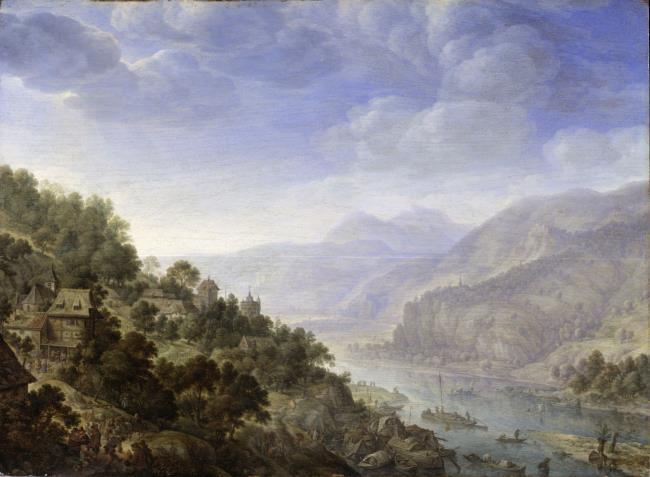 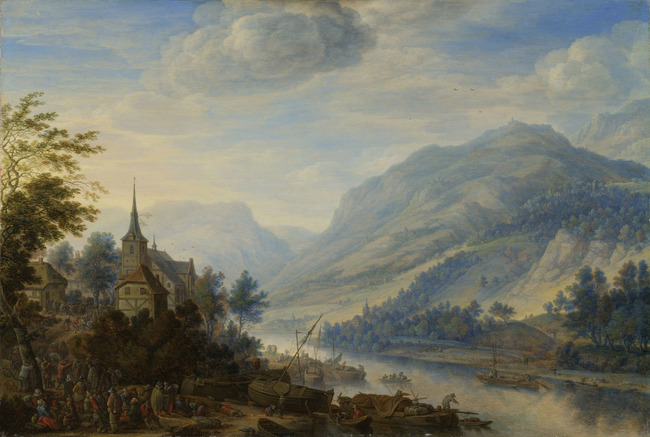 3 In a note in the DPG44 file, Murray says: ‘Not really Rijnoever [bank of the Rhine] as might have been’.

6 ‘John Vosterman. A View on the Rhine. An extensive landscape; in which the aërial perspective, the misty appearance of nature, is well preserved.’

8 ‘The name of Zachtleven does not stand so high as that of Vosterman (or rather Vorsterman) but the Dresden Gallery contains some beautiful pictures of this master. […] Formerly in the possession Mr Moses Vanhausen, who brought it over to England in 1783.’

9 ‘Formerly ascribed to Vosterman. It is an original picture by H. Saft-Leven, executed at his best period, and remarkable for the exquisite finish of the minutest details in this very rich composition.’ NB: Board Minutes, 11 March 1879: ‘Dr. Richter reported that amongst other pictures whose authenticity he had recently traced, was one by Hermann Saftleven, which he considered to be worth £600. It has hitherto been described to J. Vosterman.’