Gerard Sanders was born at Wesel am Rhein in Germany.1 He was a pupil of his stepfather, Tobias van Nijmegen (active c. 1675–1720), and his step-uncle, Elias van Nijmegen (1667–1755), who were famous practitioners of the 18th-century genre of landscape painting in interior decoration (behangselschilders, ‘wallpaper painters’). Tobias van Nijmegen worked for the Elector Palatinate in Düsseldorf, where his family lived, and where Gerard Sanders studied old master paintings in the collection of the Elector. When he was eighteen Gerard moved to Rotterdam, to study with Elias van Nijmegen, and together they decorated the interiors of the élite. Sanders chiefly painted portraits, history subjects, and landscapes; he also painted several scenes of civic virtues for the Town Hall of Middelburg in 1764, destroyed in 1940.2 He left a collection of drawings, prints, and some paintings.3 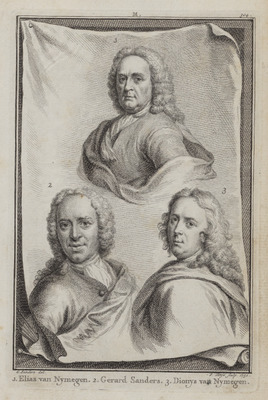 TECHNICAL NOTES
The original coarse plain-weave linen canvas support of this painting has been lined onto fine linen canvas and has added corner sections which have altered the format from an oval to a rectangle. There is a badly retouched tear in the far shoulder and some light retouching in the eye sockets. The spandrel additions have heavy craquelure. This painting has a dull, bloomed appearance due to the discolouration of the varnish and in some places, particularly over the figure, the vertical brushstrokes of the varnish are visible. Previous recorded treatment: 1953, conserved, Dr Hell; 1987, conserved, National Maritime Museum.

Archibald Hope the Elder (1664–1743) is here portrayed in 1737 by the Rotterdam painter Gerard Sanders. The canvas was originally oval, and was made into a rectangle. It had a pendant that in the 1909 Christies’ sale was entitled A Lady of the Hope Family in green dress (Related works, no. 2); this presumably depicted Anna Claus (1675–1752), who had married Archibald Hope in 1694; they had ten children who reached adulthood.10 Sanders is known to have decorated the house of Isaac Hope,11 probably one of those children. Archibald Hope appears full-face, seated in a richly embroidered Oriental gown (called Japonsche Rock – Japanese dress), very fashionable in the 18th century. His right arm rests on a table and holds a letter addressed ‘To Mr Archibald Hope / Mercht / in / Rotterdam’. His fierce gaze gives a vivid impression of the strength of his character.

Archibald Hope was a member of the Scottish family of the Hopes of Hopetown; his father, Henry, emigrated to Holland, and Archibald was born in Rotterdam and christened there in the Scottish Church on 7 December 1664.12 The family returned to London in the 1680s, leaving debts behind. Archibald returned to Rotterdam, however, and established a successful trading and shipping business with links to England, Ireland and Scotland, and in 1694 he married his fellow Mennonite Anna Claus, from Amsterdam. Their sons were spectacularly successful, establishing the Hope Bank in Amsterdam, one of the most famous merchant banks before the time of Napoleon, which existed until the late 20th century as the Bank Mees en Hope N.V., now part of ABN-AMRO.13

Several of Archibald’s family members were notable culturally, both in the Netherlands and in Great Britain: his grandson Henry built Pavilion Welgelegen near Haarlem, a magnificent Neoclassical country house where his collection of old master paintings could be admired; it is now the seat of the government of the Province of North Holland.14 John, another grandson, formed another important collection of Dutch and Flemish paintings and sculpture with his uncle Adrian.15 In 1794 in fear of the French occupation of the Netherlands the family fled to England, and there Thomas Hope of The Deepdene, a son of John and great-grandson of Archibald, became an influential art collector, Neoclassical theorist and interior decorator.16

An inscription in pencil on the stretcher reads ‘Bought at the Sale at Rushton Hall, Kettering’. The hall, dating from the 15th century, was acquired by Thomas Hope in 1828 and remained in the family until 1854.17 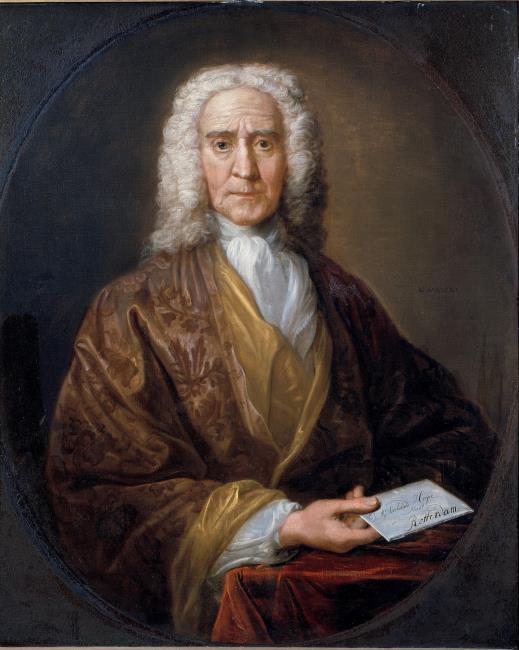 1 Many German artists came to the Netherlands to work, and settled there; in all biographical handbooks of the time they were regarded as Dutch artists; Knolle 2008.

4 ‘Portraits of Alexander Hope, Esq., in brown dress; and A Lady of the Hope family, in green dress. A pair; 34 in. by 27½ in. Hammer price: £5-5s [=5 guineas] to the art dealer “Agnew.” [Not illustrated]. The seller, whose name was not published at the time, was a Mrs Booth from Bury St Edmunds.’ Information in an email from Lynda McLeod (Christie’s Archives, London) to Ellinoor Bergvelt, 28 Oct. 2020 (DPG577 file), for which many thanks. The date of the sale and the lot number given in Jonker & Bergvelt 2016 are wrong.

5 ‘the pictures presented by him [i.e. Fairfax Murray] to the Governors may on no account be sent away from the Gallery for any purpose of copying or exhibiting in other exhibitions’.

6 Cook attributed the picture to the British painter George Sanders (1774–1846), an error corrected in the 1926 edition.

9 The DPG577 file contains a photograph of a portrait of 1706 that could be another painting of Archibald Hope, as a note on the back of the frame says ‘thought to be a portrait of the founder of the Hope family of bankers’. In 1988/9 that was in a private collection on Guernsey (letter of Lord Glendevon to Giles Waterfield, 9 Dec. 1988, DPG577 file).