Daniel Seghers [1] often produced work in collaboration with others. He was the son of a Flemish silk merchant, Pierre Seghers, who died c. 1601. After his father’s death Seghers’ mother converted to Calvinism and left Antwerp with him for the Northern Netherlands; there he probably studied with a painter in Utrecht whose name is unknown. Within a few years he had returned to Antwerp, where he was a pupil of Jan Brueghel I (Velvet Brueghel; 1568–1625) around 1609, and joined the Guild of St Luke in 1611. In 1614 Seghers, who had converted back to the Catholic faith, joined the Jesuit Order as a lay brother, then took priestly vows in 1625. He travelled to Rome shortly thereafter, where he worked with Domenichino (1581–1641). He went back to Antwerp in 1627 and remained there for the rest of his life, as a Jesuit, continuing to paint in the service of the Jesuit Order. That meant that patrons could not commission paintings, but only get them as a gift from the Jesuits. Many European princes and kings received Seghers’ pictures, for which they sent presents in return.1

Seghers specialized in flower painting from the outset, but it is difficult to establish a chronology of his work, since dated pictures only appear between 1635 and 1651. At the end of his life he made a list of his paintings, in which his ‘patrons’ are mentioned, of which an 18th-century transcript survives.2 While he also produced traditional images of flowers in vases, it is for his use of flower garlands and cartouches that he is best known and most innovative. When this genre was introduced by Jan Brueghel I in the winter of 1607–8 the flower garlands were painted with a space in the centre for an existing painting by another artist (a real Einsatzbild – a picture inserted in another picture),3 but in most of the later versions the central image and garlands are part of the same work. In Seghers’ pictures the central image was usually painted by another artist – in all at least twenty-four, including Thomas Willeboirts Bosschaert (1613/14–54), Gonzales Coques (1614/18–84) and Domenichino.4 Erasmus Quellinus II (see below) was a favourite co-worker, collaborating on at least twenty-eight paintings, as here; Cornelis Schut I (1597–1655) was involved in forty-four.5

Seghers’ work was highly sought out across Europe. He was in correspondence with many literary figures, most notably Constantijn Huygens I (1596–1687) in The Hague. He was mentioned as a possible participant in the decoration of the Oranjezaal in Huis ten Bosch, but that did not happen. Seghers had a significant influence on Dutch and Flemish flower painters and also on the Spanish still life painter Bartolomé Pérez (1634–93/8). 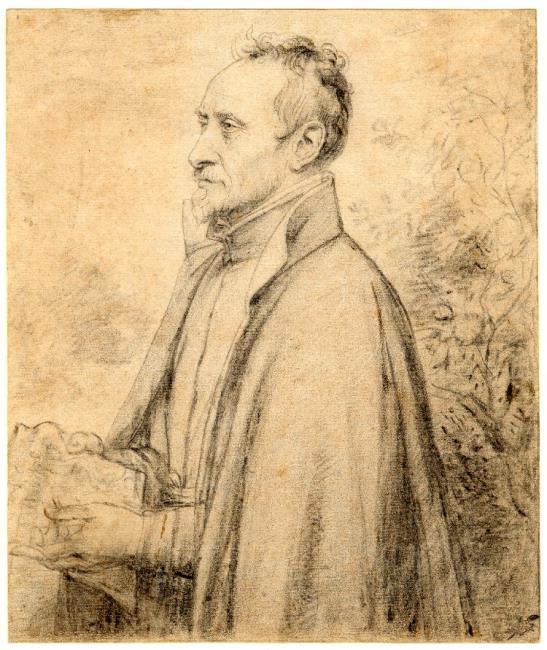 Erasmus Quellinus II's [2] father, Erasmus I (c. 1584–1640), was a sculptor, as was his brother Artus I (1609–68), who was to decorate Amsterdam Town Hall. The young Erasmus received a humanist and literary education, but developed as a painter. His teachers were the otherwise unknown Jan-Baptist Verhaeghe in 1633 and Peter Paul Rubens (1577–1640). Erasmus became a member of the Guild of St Luke in Antwerp in 1633–4. He often worked with Rubens, including decoration for the triumphal entry into Antwerp of the Cardinal-Infante Ferdinand of Austria (1609–41) in 1635, and paintings in the Torre de la Parada, the hunting lodge of King Philip IV (1605–65) outside Madrid, in 1636–8. With his brother Artus he decorated rooms in Amsterdam Town Hall c. 1656. He also made designs for tapestries. He contributed fictive sculpture in grisaille to flower still lifes, including those of Daniel Seghers. Later he received many civic commissions for official ceremonies in Antwerp, such as the theatre for the proclamation of the Peace of Westphalia in 1648. Erasmus Quellinus II was a very successful painter; when he died he had a large collection of paintings by Rubens, Anthony van Dyck (1599–1641) and Italian masters, and sculptures by his brother Artus and François Du Quesnoy (1597–1643), the Flemish sculptor living in Rome, who had influenced Artus while he was there. 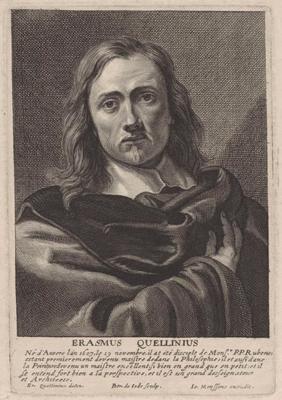 Daniel Seghers and Erasmus Quellinus II
DPG322 – Cartouche with the Virgin and Child and a Monk [?] in a Flower Garland

TECHNICAL NOTES
Unlined medium plain-weave linen canvas, still on the original pine stretcher. The paint surface has a predominantly horizontal craquelure all over, which is slightly raised, especially in the dark areas. There is some cupping, particularly over the stretcher bars. There is a small retouching below the main signature covering either two vertical scratches or the number eleven. This painting, in an excellent state of preservation, is unlined and retains its original stretcher. Previous recorded treatment: 1936, frame and stretcher treated with paraffin; 1953, conserved, Dr Hell.

In 1813 Britton attributed DPG322 to Jan Brueghel and Rubens, who indeed were the inventors of this kind of flower painting around a religious scene, in their case the Madonna and Child, at the beginning of the 17th century.10 Passavant was the first to see the signature of Seghers, remarking of the collection at Dulwich ‘The little knowledge and care employed in compiling the catalogue, is evident from the circumstance of a Vase of Flowers, on which “Daniel Seghers tacti [sic] IESV” is plainly legible, but which, nevertheless, is given out for the united production of Rubens and Breughel.’ Passavant however did not read Seghers’ signature correctly, and missed the initials of Quellinus completely – if they were visible at the time. Waagen seems to have been the first to decipher the initials. Without them Erasmus Quellinus II would not be a likely candidate: his work is generally of much higher quality.11 De Bruyn suggests a date of c. 1655–60 for DPG322, which seems reasonable. A similar collaboration between Seghers and Quellinus was sold in Vienna in 1994 (Related works, no. 1) [3].

DPG322 is an example of a particular genre of 17th-century Flemish flower painting, the ‘religious still life’.12 Such pictures usually consist of a central religious subject, often depicted as sculpture, surrounded by a garland of flowers and fruit. The resulting images are thus both devotional and decorative, and they were meant to intensify the viewer’s religious experience when looking at art. They are explicit Counter-Reformation statements, combining a veneration of the Madonna with ‘stone’ reliefs and swags of flowers.

In addition to roses the flowers here include alcea (hollyhock), narcissus (jonquil), leucojum, and blue and white scilla. As several canvases with flowers and cartouches have been discovered without the central image it is thought that Seghers worked on the paintings first. Until recently the cartouche here was thought to contain a Virgin and Child with St Anne, which, according to the inventory drawn up by Seghers of his own work, could have been painted for Anna Maria Mechelmans.13 However, when compared with other scenes of the Virgin and Child with St Anne the figure on the left does not look like a St Anne. She is usually depicted in a family setting – for instance holding the Christ Child on her lap (Related works, no. 1) [3] or playing with the Child (Related works, no. 2) [4] – whereas here there seems to be a devotional distance between the two. Rather than St Anne the hooded figure looks like a monk (or nun?) with hands clasped in devotion. No such subject can be found in the list of Seghers’ works – or is it hidden under the description ‘with a bas-relief by Seigneur Quellinus’?14 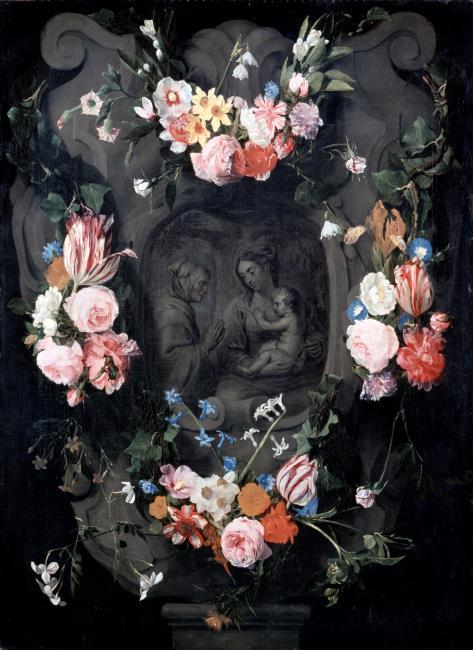 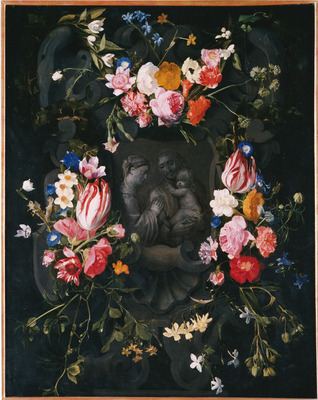 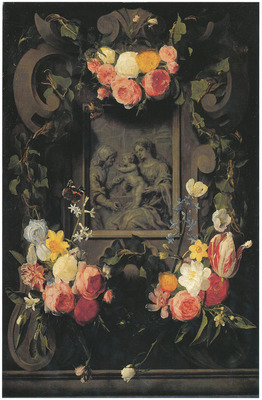 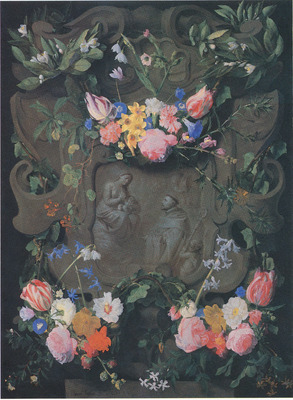 10 Three of these paintings with a garland by Brueghel and a Madonna and Child by Rubens seem to have survived (from c. 1616–20): Van Suchtelen in Woollett & Van Suchtelen 2006, pp. 3 (fig. 1, Alte Pinakothek, Munich), 116–17, no. 12 (Prado, Madrid) and 120 (fig. 69, Louvre, Paris). In these cases Rubens used colour; the scenes are presented as a kind of trompe-l’œil ‘real’ pictures (in the Prado version the picture hangs with an eyelet on a cord amidst the flowers) combined with ‘real’ flowers, just as Seghers and his collaborators were combining trompe-l’œil reliefs in grisaille with ‘real’ flowers. See also note 3.

11 According to Helen Hillyard ‘the EQ monogram appears to be original and an integrated part of the design […] However, it is very small and easily missed’, email to Ellinoor Bergvelt, 13 Feb. 2020 (DPG322 file).