Jean Michel (or Jan Michiel) Ruyten [1], who is largely forgotten now, studied at the Antwerp Academy, and afterwards with the Antwerp painter Ignatius Josephus Van Regemorter (1785–1873). In 1836 he first featured in the Brussels Salon, and went to the Netherlands to study landscape painting. Notwithstanding the hostilities between the two countries after the Belgian revolt in 1830 and subsequent independence, the Dutch were still considered to be the masters of landscape. Ruyten was influenced there by the early 19th-century landscape artists Antonie Waldorp (1802–66), Andreas Schelfhout (1787–1870) and Wijnand Nuijen (1813–39). He became a member of the Antwerp Academy in 1840, and there the influence of the younger Henri Leys (1815–69) led him to treat historical subjects. He painted landscapes, marines, architectural views, interiors, and historical works, which he exhibited in his native Belgium, Vienna, and London, winning many prizes. He worked in watercolour and in oil. Examples of his work can be found in museums in Antwerp, Courtrai, Philadelphia, Stuttgart and elsewhere. 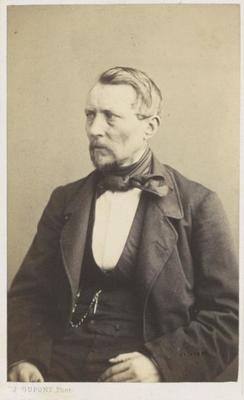 TECHNICAL NOTES
The medium linen (?) canvas still retains its original tacking margins and stretcher. Paper attached to the reverse of the stretcher bears a handwritten address ‘Miss Ingoldby / Greenways (?) / Ridgemount Road / S. Albans / Herts.’ There is also a pencil inscription: ‘MISS INGLEBY’S GIFT’. The marks of the stretcher bars are visible on the front of the canvas and, relating to this, there is a line of craquelure down the left-hand side with a small amount of flaking. The paint surface has a slightly granular texture; it has been suggested that this work is an oleograph (an oil-paint print, textured in imitation of an oil painting) rather than a painting but, as the materials are the same, this is difficult to confirm. There is a mended semicircular tear in the canvas in the bottom left quarter. The entire painting is covered with a layer of discoloured varnish. Previous recorded treatment: 1994, tear mended and weak edges reinforced with brown paper, S. Plender and N. Ryder.

The painting came into the Dulwich collection without a name, but the attribution to Jean Michel Ruyten seems safe. The subject is the wrought-iron well-head of 1490 beside the west front of the Cathedral in the Handschoenmarkt of Antwerp.1 Originally in front of the Town Hall, it was moved to its present location c. 1550. It has traditionally been thought to be the work of the painter Quinten Massys I (1465/6–1530); there may be some truth in the association, since the painter came from a family of blacksmiths. At the top of the well-head is Silvius Brabo, the legendary Roman soldier who killed the giant Druon Antigoon. The giant had been chopping off the hands of people unwilling to pay a toll at the river Scheldt, and throwing the hands into the river. Brabo killed him, chopped off his hand, and threw it in the river. According to this story, the name of Antwerp came from Hand werpen, to throw hands.2

Ruyten has clearly attempted to show that the Handschoenmarkt was a meeting point of all the social classes. While notably picturesque, the ‘Metsys Well’ and the Cathedral also carried political significance. The area that now comprises the state of Belgium was successively under Spanish, French, and then Dutch control. Around 1800, during the French period, Antwerp Cathedral had been completely ransacked (paintings by Peter Paul Rubens (1577–1640) and other masters had been taken by French troops to the Louvre) and threatened with demolition. After the defeat of Napoléon I (1769–1821) the interior was totally refurbished. DPG626 should therefore be seen in the context of Romantic nationalism, and pride in the history and culture of Antwerp and the newborn Belgian state.3 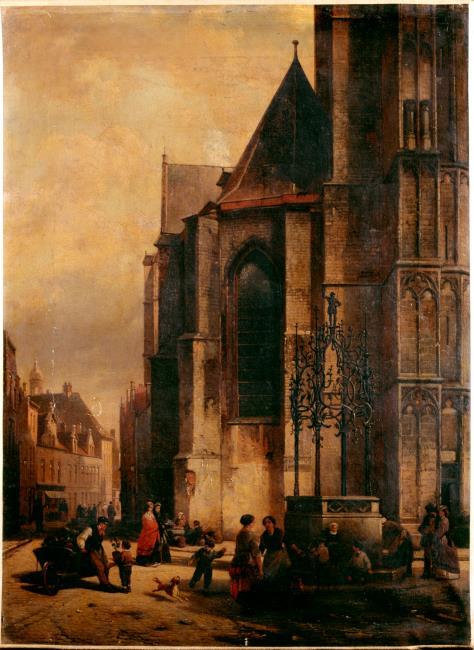 2 Brabo was also sculpted for a much larger fountain dating from 1887 that is now on the Grote Markt, by the Belgian artist Jef Lambeaux (1852–1908).