DPG168 – Landscape with Windmills near Haarlem

TECHNICAL NOTES
Oak panel with horizontal grain. The verso is slightly bevelled at the lower edge, and there is a stencilled inscription, ‘G.H.’, on the reverse. There is some blistering and flaking above the lower edge on the right of the water, and the blue sky is very thin in the upper right corner. Later additions in the form of a painted-out figure group in the centre left of the painting, a figure with a horse on the right-hand side and several blue spots in the foreground were removed during conservation in 1996. Previous recorded treatment: 1866, ‘revived’, revarnished; 1945, conserved (including varnish removal), Dr Hell; 1979, treated for blistering and flaking along the lower edge, National Maritime Museum, E. Hamilton-Eddy; 1996, technical analysis carried out, L. Sheldon; conserved, N. Ryder.

The handling and subject matter are typical of Ruisdael’s work in the mid-1650s. Two windmills are set against a dramatic sky, with a view of the church of St Bavo at Haarlem in the background. Slive considered that it did not correspond to topographical views of Haarlem, but there are several views from the dunes near Bloemendaal (to the west) and Overveen (to the north-west) where St Bavo is shown with closely set mills – for instance in a drawing by Ruisdael himself (Related works, no. 1) [1] and in one by Rembrandt (Related works, no. 2) – and there were windmills all around Haarlem. Pieter Biesboer considers that this is a view from the south-east: the mills are on the edge of low sand dunes, and in the foreground is a drainage creek; beyond is some peat land, beyond that are the treetops of the Haarlemmerhout (the forest at the southern end of Haarlem), and then St Bavo and the tower of the Bakenesserkerk. Next to the mills are piles of wood for the barrels with leach used in the bleaching fields (often depicted by Ruisdael), of which there were many near Haarlem to bleach the linen of Haarlem and Amsterdam households.20

Artists took liberties when depicting landscapes, and that was certainly the case when they depicted windmills.21 The two windmills here are both grondzeilers (ground-sailers), a round and an eight-sided one (see also Related works, no. 3) [2], and both seem to be thatched.22 Windmills are one of Ruisdael’s characteristic subjects, although he painted many more waterfalls. In general Dutch painters were not as interested in windmills as a 21st-century (art-)historian might expect them to have been. Ruisdael began producing pictures of windmills from the start of his career, as can be seen, for example, in a painting in Cleveland of 1646 (Related works, no. 4) [3] and a roughly contemporary group of black chalk sketches now in Dresden. One of the latter shows a mill, of another type (wipmolen, a wip mill or hollow post mill), in the same position as the main one in DPG168 (Related works, no. 5). In another drawing the mill is an eight-sided ground-sailer like the second one here (Related works, no. 6).

In DPG168, as in many of his windmill scenes – most notably in the famous Mill at Wijk bij Duurstede, with yet another type of mill (Related works, no. 8) [4] – Ruisdael adopts a low viewpoint, magnifying the mills so that they dominate the landscape, and silhouetting them against a dramatic sky. Slive has commented that the handling and overall composition are similar to Ruisdael’s Windmill near a River and the Ruins of Egmond Abbey and the Buurkerk at Egmond-Binnen (Related works, no. 7), which shows an eight-sided mill.23 Here, however, unlike those two pictures, brilliant sunlight breaks through to illuminate a sliver of the landscape, monumentalizing an everyday scene. In this monumentality and drama Ruisdael departed from his early models, his uncle Salomon van Ruysdael (c. 1600/1603–70) and Jan van Goyen (1596–1656).

DPG168 shows a landscape where windmills turn and people work. The choice of what is essentially an industrial landscape as a subject for painting is one of Ruisdael’s most important legacies, leading to Romanticism and its various 19th- and 20th-century descendants. As with all his works, it is difficult to decide whether the artist intended his picture to have an allegorical or symbolic meaning.24 Windmills were very common in the Netherlands at the time – for grinding grain, for keeping water out of the polders, and for water management in general. They were often depicted in prints,25 such as the Amstel Gesichjes, six picturesque views of the river Amstel by Abraham Bloteling after Jacob van Ruisdael probably made for tourists: in three of these prints mills feature prominently, especially in the frontispiece (Related works, no. 9) [5]. Today the windmill is an icon of the Netherlands, but in the 16th century windmills came to be given a wide range of meanings: as an icon of modern technology, as a symbol of the mind, of the fortune of man, of the evil world, or, in a more specifically Christian context, of the Eucharist and Redemption.26 As Seymour Slive has repeatedly pointed out, however, given the objects featured in Ruisdael’s paintings, almost any composition could be interpreted as symbolic. In the case of DPG168, it is perhaps best to say that while some of Ruisdael’s contemporaries may have seen symbolism in it, others may not.

Given its dramatic nature it is not surprising that the picture should have attracted the attention of John Constable, who painted a copy in 1831 (Related works, no. 11) [6]. Constable visited the Gallery on 30 July 1830 with five other Royal Academicians, and chose the Ruisdael and five other paintings to copy in the Royal Academy school. He had long been interested in Ruisdael, writing in a letter of 4 February 1799 that ‘I shall begin painting as soon as I have the loan of a sweet little picture by Jacob Ruysdael to copy’.27 Constable’s copy bears an inscription under a label that reads ‘… by John Constable RA f. 1831 from the original painting by J. Ruysdael in the Dulwich Gallery’. Desenfans and Bourgeois had assembled their collection precisely to enable such copying. In Constable’s day the windmill had become an icon of an almost vanished golden age, whereas in Ruisdael’s time it was a vital source of Dutch prosperity.

Parts of DPG168 had been overpainted, perhaps by Bourgeois. The overpainting was removed in 1996 (see Technical Notes), but the figures can still be seen in the Constable copy and in the print by Ralph Cockburn (1779–1820) [7].28 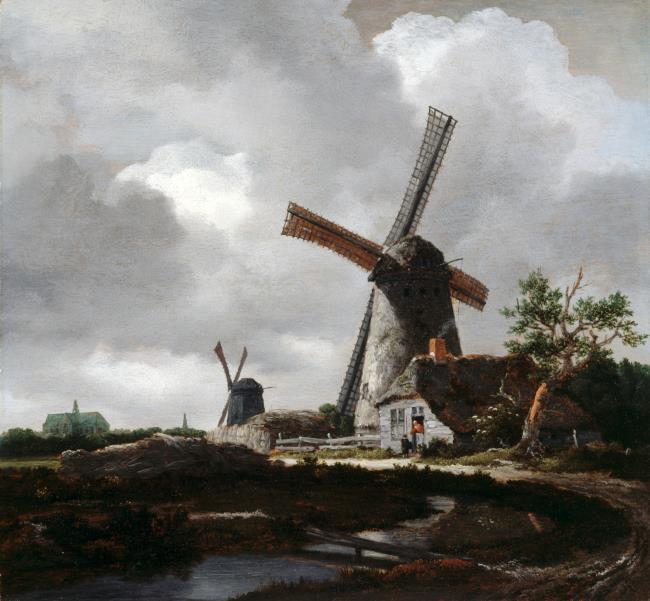 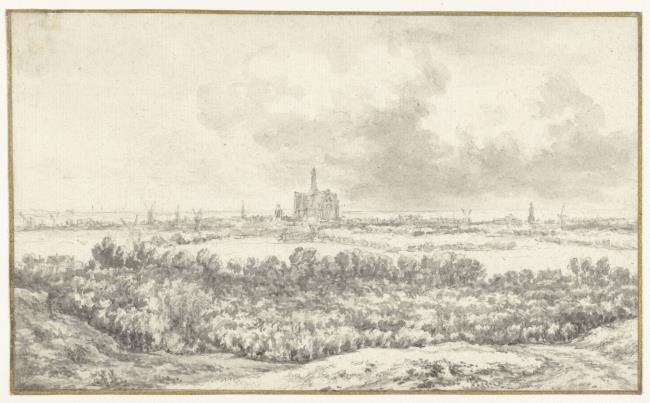 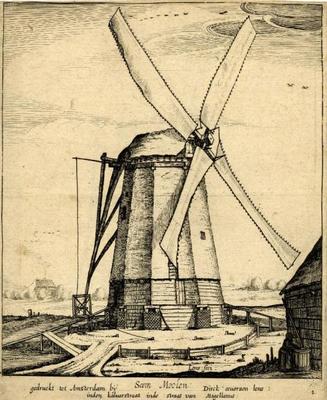 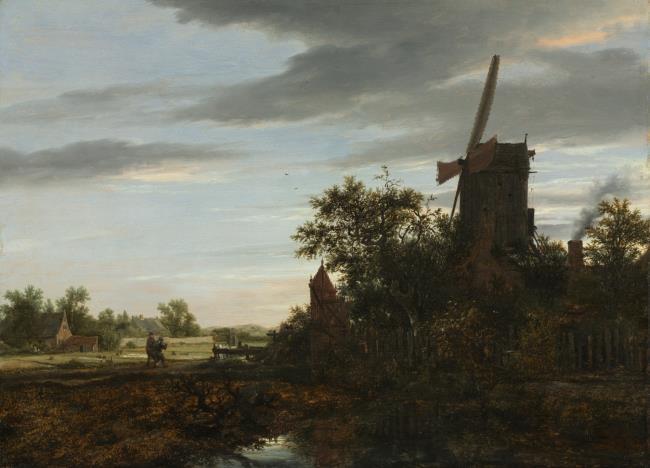 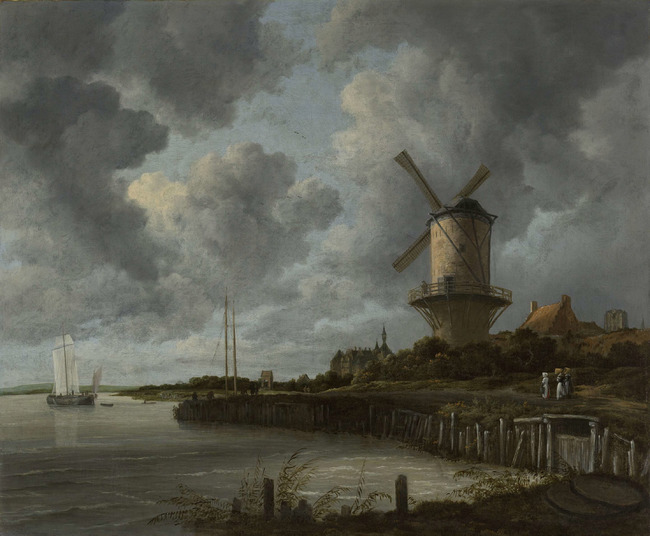 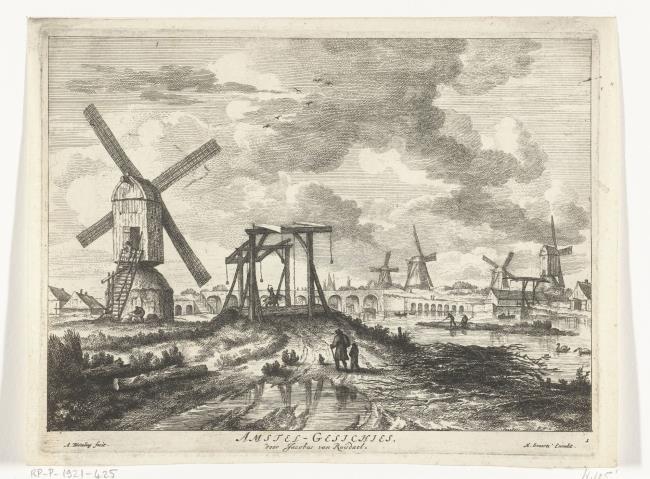 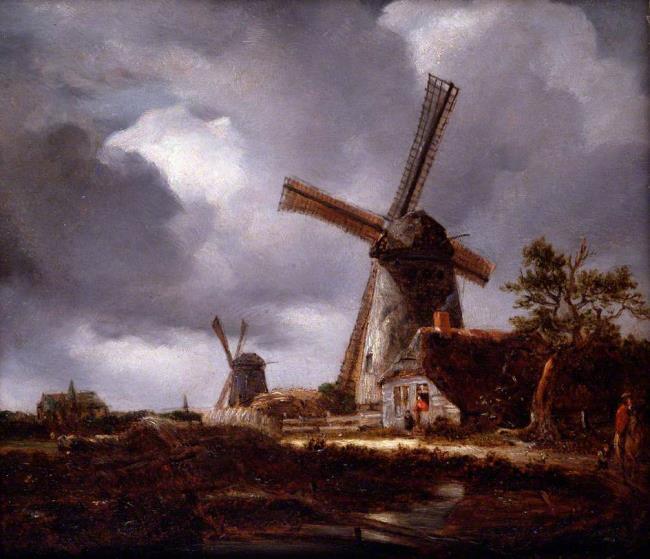 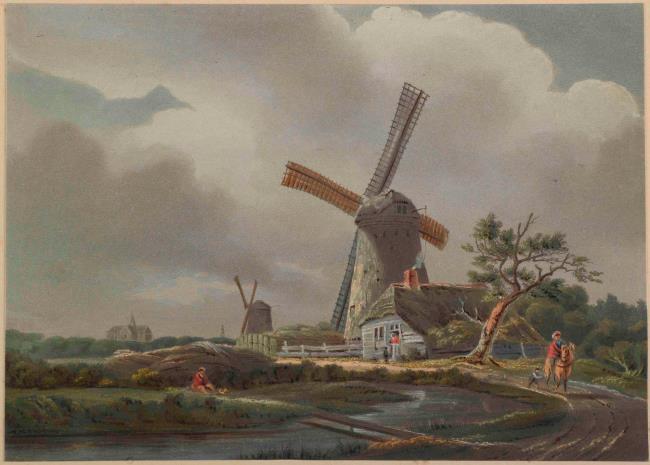 3 ‘Nothing can be better, in its way, than this rich, spirited, and unaffected work. It is “the truth, and nothing but the truth;” which can scarcely be said of the works of any other landscape painter whatever, except Hobbima. If we do not find here the glowing gracefulness of Both, the mysterious beauty of Cuyp, or the ideal perfection of Claude, we have in their place the freshness, the vigour, and the spirit of Nature herself.’

4 ‘Very simple in its motive, but very solemn and of great poetical charm. The horse in the foreground has been re-painted, probably by the artist himself.’

7 ‘A pentiment shows traces of a man leading a horse under the falconer on horseback.’

22 For the two types of mills depicted – a thatched grondzeiler and an eight-sided grondzeiler – see Endedijk 1998, pp. 20–21. For surviving windmills in the province of North Holland dating from the 16th to the 20th century, see http://en.wikipedia.org/wiki/List_of_windmills_in_North_Holland (May 6, 2020).

28 Mark Evans has suggested that if the additions were indeed by Bourgeois, he might have been influenced by the figure types found in the Cuyps in his own collection.