TECHNICAL NOTES
The plain-weave medium linen canvas support bears an old, slightly lumpy, glue-paste lining and a more recent tencate and Beva strip-lining; the original tacking margins have been cut. The canvas was initially prepared with a dark-brownish buff ground, with an additional grey inlay under the sky. Over time some areas of the paint, notably the half-tone scumbles in the water, have increased in transparency, allowing the dark ground colour to show through disturbingly, and isolating the thicker highlights in these parts. There is some thinness in the darks and some light wear in the mountain and in the foreground. The paint film bears a fine craquelure all over. There are several old small losses, particularly along the bottom edge where the paint has previously been noted as friable.13

Waterfalls – a feature unknown in the landscape of the Netherlands – were an important theme in Ruisdael’s œuvre. He began to paint them in the second half of the 1650s, at first in a vertical format, then in the 1660s and early 1670s in a horizontal format as well (Related works, no. 1) [1]. DPG105 dates from the 1670s. It is important to remember that Ruisdael’s scene here is imaginary, made up of Scandinavian or German elements. Only one drawing by him of a Northern landscape has survived, of something he had probably never seen (Related works, no. 2).

In choosing such subjects Ruisdael was to some extent inspired by the popularity of works by Allaert van Everdingen (1621–75).21 In 1644–5 Van Everdingen had travelled to the south-east coast of Norway and to western Sweden, where he was profoundly affected by the dramatic landscapes. Back in the Netherlands, he had begun to paint landscapes with Northern motifs by 1648 — mountain views, rock and water scenes, and waterfalls – and he continued to do so for the rest of his career (Related works, no. 3). On the other hand, Ruisdael was already interested in waterfalls in the 1650s, and had presumably seen them during his travels in Germany. Furthermore, he was also following an earlier Dutch tradition of waterfall scenes, chiefly in prints and drawings by Hendrick Goltzius (1558–1617; Related works, no. 4) and Roelant Savery (1576–1639), who depicted mountainous scenes in the Tyrol (Related works, no. 5).22 The fantasy landscapes of Hercules Segers (1589/90–1633) were also earlier in depicting waterfalls (Related works, no. 6).

A number of Ruisdael’s waterfall scenes contain elements that might be interpreted as symbolic – castles, ruined huts, and so on. Some critics have seen a connection between the waterfall motif and references in contemporary literature to the cascade, a topos for the transience of human life.23 The play on Ruisdael’s name found in Houbraken also comes somewhat earlier in religious moralizing literature: in the writings of Jan Luyken (1708) the emblem of a waterfall with the motto ‘Tot verdooving’, ‘To deafening’, points the contrast between the noise of the waterfall and the silence of God:

Others, however, have rejected the interpretation of Ruisdael’s works as allegorical or symbolic, arguing that such moralizing is too unspecific for it to be decoded today.

The present picture would presumably have attracted Desenfans and Bourgeois for its sublime, Romantic character. Others disapproved. German authors including Goethe, Schlegel and Kugler, and the 19th-century theorist Théophile Thoré-Bürger (1807–69), favoured the Heimath-getreuen, the painters faithful to the homeland: Dutch landscape painters should depict real Dutch landscapes, with features such as windmills. Painters who went to foreign countries, be it Scandinavia or Italy, were regarded as traitors.25 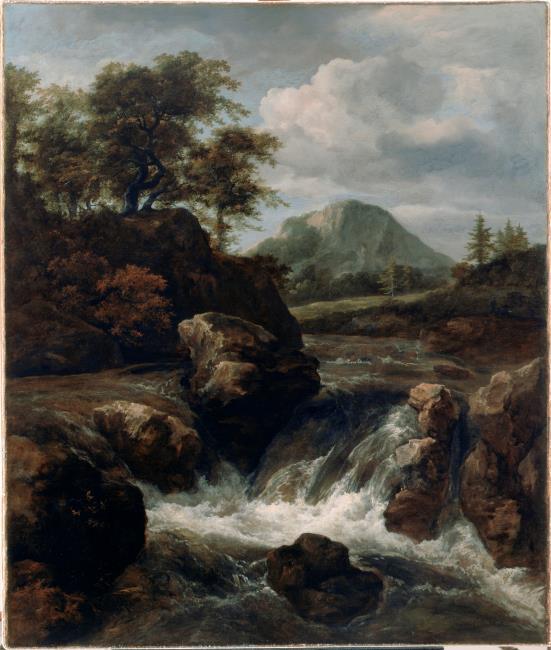 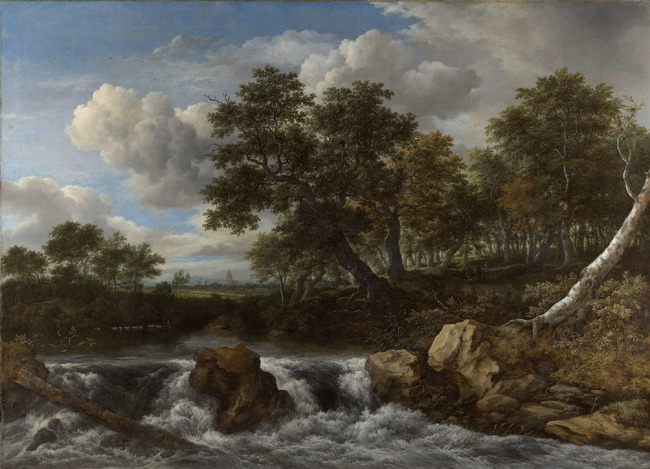 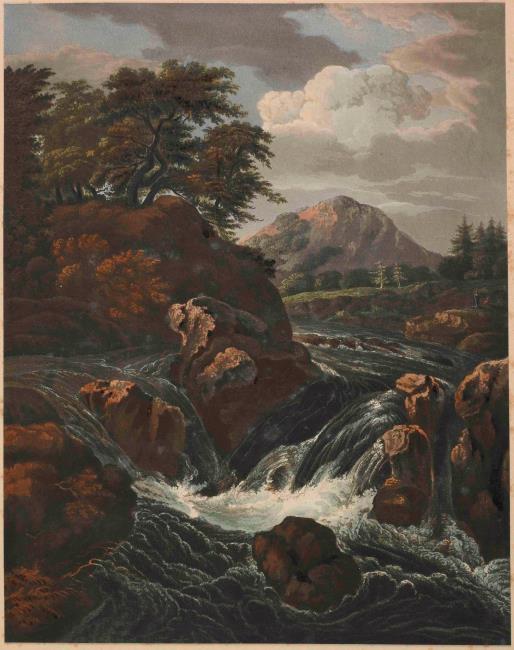 1 Denning noted that the picture had two signatures: ‘Once painted by Ruïsdael, and again by Sir F. Bourgeois who had not seen the former signature, & therefore inserted the painter’s name in larger characters’ (Denning 1859, no. 154). The latter has been removed.

3 ‘RUYSDAEL. A Waterfall. In a most capital style.’

4 ‘Here (to pass from one kind of excellence to another with kindly interchange) is a clear sparkling Water-fall, by Ruysdael [145] [DPG105] and Hobbema’s Water-Mill [131] [DPG87] […] Is not this a sad anti-climax, from Jacob’s Dream to a picture of a Water-Mill? We do not know; and we should care as little, could we but paint either of the pictures.’

6 ‘In these scenes Ruysdael was unrivalled. The water is touched with extraordinary truth and spirit: it leaps, foams, and sparkles along most merrily; and that part of it which is flowing over the shallows is as transparent as crystal.’

9 ‘It has been stated that J. van Ruisdael painted waterfall scenery only in his latest period; the style of the signature on this picture certainly tends to confirm the correctness of this observation.’

10 ‘(The signature “Ruysdael” is said to mark his earlier works.)’

11 ‘A late work […] Perhaps the “upright landscape” in an undated Desenfans list of “Pictures to be sold.”’

12 Blunt was the first to suggest that this was perhaps the upright landscape in the list of ‘Pictures to be sold’: see note 2.