François Ryckhals was rediscovered in 1917 when Bredius managed to decipher the complex monogram of the artist, whose works were previously attributed to Frans Hals II (1618–69).1 François Ryckhals may have studied with Pieter de Bloot (c. 1601–47), a slightly older artist, in Rotterdam. In 1633 and 1634 he was a member of the Dordrecht painters’ guild, but for the remainder of his life he worked in Middelburg. Dated works are known from 1632 to 1645. Ryckhals painted landscapes with Biblical scenes, and also sumptuous still lifes with silver and gold objects or with fruit and fish, often with a seascape in the background. Still lifes in kitchens or barns were also a specialty.

Attributed to François Ryckhals
DPG515 – Interior of a Barn

TECHNICAL NOTES
Plain-weave linen canvas. Glue-paste lined; the canvas is coming away from the lining at the lower right side. The paint film is extremely thin and worn and there are old retouchings. Partial, unsuccessful cleaning of the darkened and very shiny varnish is visible in the cauldron and barrel. This painting is the pair of DPG516. Previous recorded treatment: 1952–5, partial cleaning, Dr Hell. 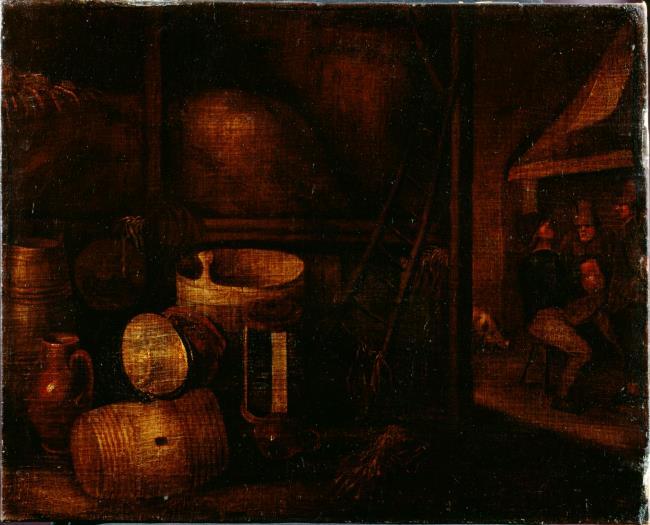 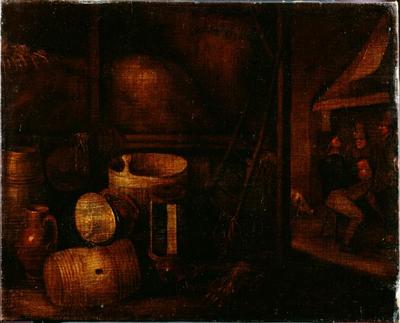 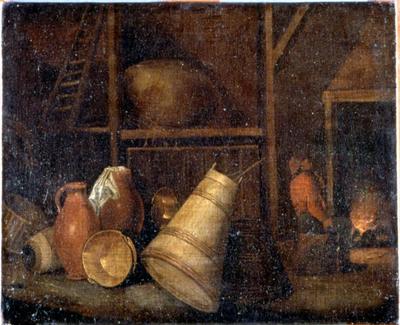 Attributed to François Ryckhals
DPG516 – Interior of a Barn

PROVENANCE
Cartwright Bequest, 1686 (no. 27, £5, 'a duchman in a Red wascot taking tabacco a fire before him, A parsell of kettells, cherns & earthing picherds in 3 quarters clouth in a gilt frame').

TECHNICAL NOTES
Plain-weave linen canvas. Glue-paste lined. The paint layers are thin and rather abraded and there is much overpaint. A thick, uneven, shiny and worn coating of very dark varnish obscures the image. This work is paired with DPG515. Previous recorded treatment: 1952–5, semi-cleaned in foreground, Dr Hell.

DPG515 and DPG516 form a pair of pictures of a type often found in 17th-century Netherlandish art, with still lifes of domestic objects such as pots and pans in the foreground and lower-class figures in the background, sometimes set in taverns. Such scenes exercised the talents of, amongst others, Adriaen Brouwer (1603/5–38), Adriaen van Ostade (1610–85), Willem Kalf (1619–93), and David Teniers the Younger (1610–90).6 It is not clear who started the genre. François Ryckhals was proposed by Bredius in 1917, but that was based on the misinterpretation of the date on a still life in Sweden.7 Haak suggested that Ryckhals introduced the genre of the stable interior with a strong still life character.8 Herman Saftleven II (c. 1609–85), otherwise known as a landscapist, seems to be a better candidate (Related works, no. 1) [1].9 There is probably an initial connection between this genre and one of the emblems by Claes Jansz. Visscher (c. 1587–1652) in Roemer Visscher’s Sinnepoppen of 1614, with household utensils (Related works, no. 2) [2].10 The meaning of that print and its text was to warn newlyweds to concentrate first on the food and objects that are necessary in a household; once that is secure, then one can turn to frivolous things such as wine. Whether that meaning was associated with the two Dulwich pictures, by the artist or by the clients, is unknown.

There has been considerable debate about the authorship of the pair, which have remained largely unpublished.11 Christopher Brown proposed Arent or Abraham Diepraam (1622–70), a Rotterdam artist, or Egbert van Heemskerck I (1634–1704), who had worked in London, some of whose paintings were in Cartwright’s collection.12 However in their pictures the still lifes seem to be subordinate to the figures, while here it is the other way round. J. Nieuwstraten of the RKD proposed a follower of Cornelis Saftleven (1607–81), the brother of Herman; Nicola Kalinsky noted similarities in the extremely uneven œuvre of Pieter de Bloot, possibly the master of Ryckhals; and Guido Jansen suggested Hendrick Martensz. Sorgh (c. 1609/11–70).13 All of these artists, however, are considerably superior to the author of DPG515 and DPG516. It is tempting to speculate that these may be English pictures in a Dutch style, by someone such as Egbert van Heemskerck II (c. 1666/86–1744), although no still lifes by him are known. It is perhaps significant that they are unattributed in Cartwright’s inventory, though examples of the work of Heemskerck I were in his collection.

We think the attribution to Ryckhals is more convincing, when we compare DPG515 and DPG516 with two very similar works by that artist (Related works, nos 3 and 4) [3-4]. 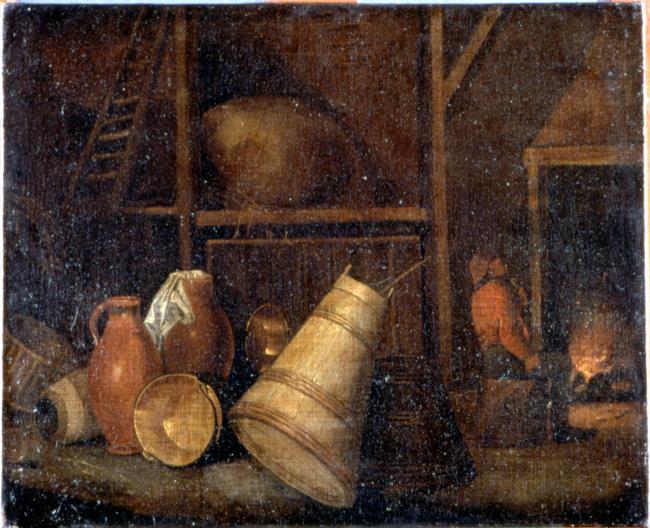 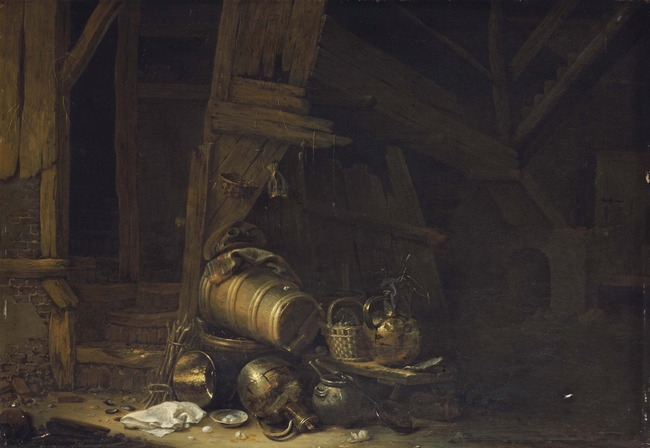 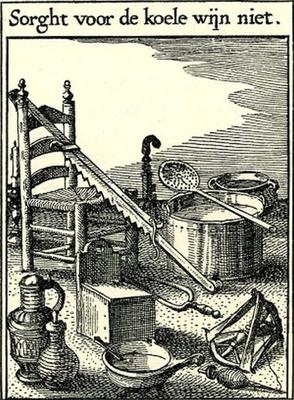 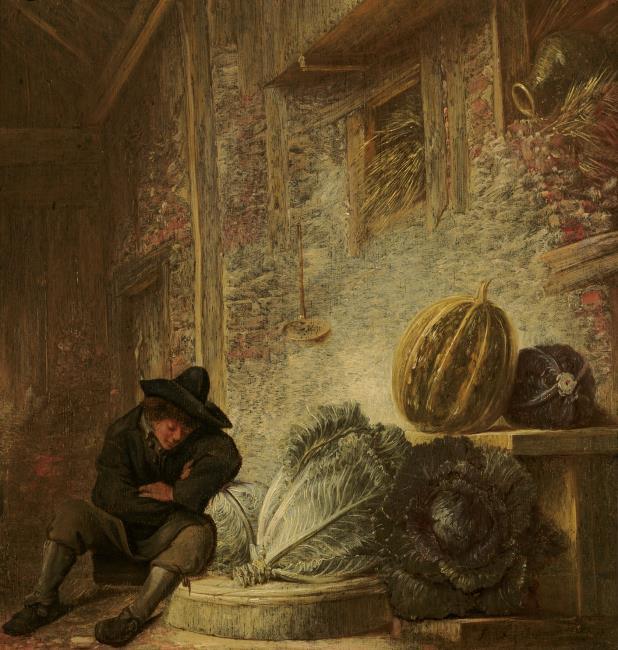 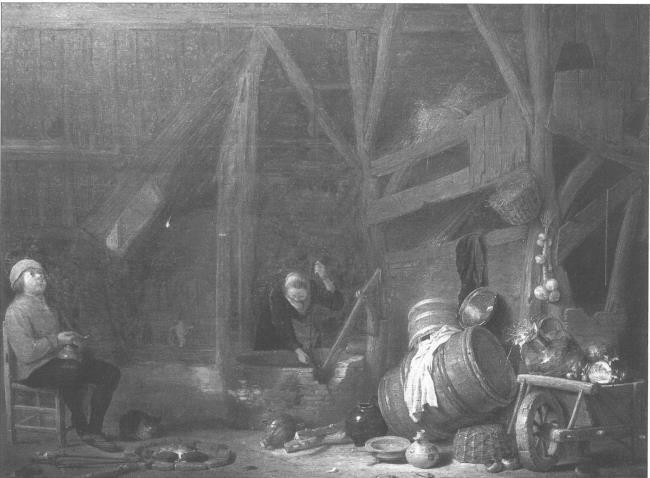