Pieter Saenredam [1] was noted for his paintings and drawings of churches, both interiors and exteriors. He was the son of an engraver, mapmaker and draughtsman. After his father’s early death he moved with his mother in 1608 from Assendelft to Haarlem, and there in 1612 he entered the workshop of Frans Pietersz. de Grebber (1573–1649), where he stayed until 1622. In 1623 he became a member of the Haarlem Guild of St Luke, where he played an important role as secretary (1633), warden (1640), and dean (1642).

His earliest dated painting is of 1628 (J. Paul Getty Museum, Los Angeles); in it his style is already fully mature. His pictures are characterized by close tonalities and balanced compositions which record existing architecture. At the same time, however, he was not above modifying his depiction of a building for artistic effect, and the perspective of his interiors is consciously artificial, including more than could be seen from a single viewpoint. His working method consisted of making a series of detailed sketches, from which he produced a construction drawing based on actual measurements of the building, which was the same size as the finished painting.1 Saenredam painted buildings in Assendelft, Haarlem, Utrecht, Amsterdam, Alkmaar, ’s-Hertogenbosch and Rhenen. In general he painted the figures himself; in exceptional cases other painters such as Jan Both (1615/22–52) made the staffage figures.2

His painted œuvre consists only of some fifty-five works, no doubt a reflection of his slow and careful working practice. He had a very substantial library and a collection of paintings, prints and drawings, including albums with drawings made in Rome by Maerten van Heemskerck (1498–1574), which he used in his own paintings.3

Paintings by Saenredam, Gerard Dou (1613–75) and Adam Elsheimer (1578–1610; see DPG191, Schalcken) were included in the Dutch Gift of 1660 from the States-General to Charles II of England (1630–65),which consisted primarily of Italian paintings and Antique sculptures.4 Saenredam’s view of the interior of St Bavo in Haarlem, that was part of this gift, is now in Edinburgh.5

His fame, and its development, is somewhat comparable to that of Johannes Vermeer (1632–75): both have small œuvres, so both were rare masters, waiting until the end of the 18th century to be rediscovered. But while Vermeer became one of the three celebrities of 17th-century Dutch painting (with Rembrandt (1606/7–69) and Frans Hals I (1582/83–1666), Saenredam became a painter for connoisseurs, par excellence the illustrator of the empty, unadorned, whitewashed Protestant churches of the northern Netherlands. 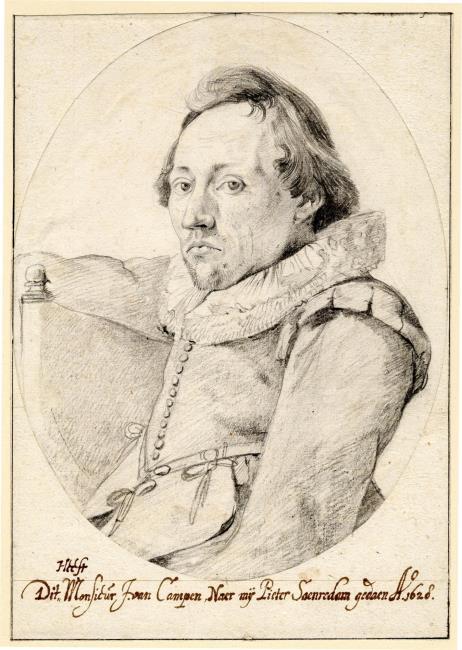 After Pieter Saenredam
DPG59 – South Aisle of the Church of St Bavo, Haarlem

TECHNICAL NOTES
The single-member vertically grained oak panel is in good condition; it is only very slightly warped and has a few old, now inactive, wormholes on the reverse. This work is thinly painted over a white ground. There are small chipped paint losses in the vaulting of the upper part of the painting. Some old retouchings at the top edge have blanched and appear matt, and a few losses have been in-painted without being filled first. The entire painting is covered with a discoloured yellow varnish, and there are some traces of very dark residual varnish in the brushwork. There are some scratches and abrasions to the varnish. Previous recorded treatment: 1952–3, conserved, Dr Hell; 1983, examined, National Maritime Museum; 1988, examined, Courtauld Institute of Art.

The picture is a copy of Saenredam’s original dated 1633 in Glasgow (Related works, no. 1) [2], for which a construction drawing dated 1631 existed in Berlin until 1945 (Related works, no. 2). All the paintings recognized as Saenredam’s are carefully constructed with the help of lines ending in a vanishing point, but nothing of the kind is detectable here.17 It is perhaps significant that the dimensions nearly match the Glasgow original. The Dulwich picture is slightly cruder in execution, but the painting technique, building up the walls with a rather thick brush, like a house painter’s, is the same in both versions. One remarkable difference is in the coat of arms in the stained-glass window: the Glasgow painting shows the arms of Haarlem, the city of St Bavo, whereas the Dulwich picture has the arms of the city of Utrecht. A possible explanation is the wish of a client.18

We know the names of two students of Saenredam, Claes Cornelisz. van Assendelft (1642) and Claes Heereman II (1651),19 but no work by them has survived. In view of the lesser quality of the painting in Dulwich compared to that in Glasgow, someone (one of the two students?) in Saenredam’s studio might have been commissioned by him to make a painting with the same image, but with the coat of arms of Utrecht instead of Haarlem in the window. What argues against this is that until now there has been no second version of any picture by Saenredam that can be regarded as authentic, made by Saenredam himself or from his workshop. It is not impossible, however, that Saenredam produced a copy directly from the prime version without using the same geometrical system. Or is it possible that he let his pupils make such a copy, whether or not as part of their learning process, and whether or not the picture was in the end sold to a client?

The scene is the south aisle of the church of St Bavo, the ‘Grote Kerk’, in Haarlem, looking west. Saenredam painted this church thirteen times (and was later buried there). It was built in Brabantine Gothic style on the site of an older church, after a fire swept through Haarlem in 1328. Under construction for more than a century, it was originally a parish church, but in 1559 it became the cathedral of the newly formed diocese of Haarlem. The south aisle was built between 1472 and 1481. The large arch at the left is the entrance to the baptistery, with an iron screen (still in situ, dated 1429). In 1566 much of the interior decoration fell victim to iconoclastic fury, and in 1578 the church was reserved for Protestant worship by the city authorities. The scene depicted, thought at present to be ‘the baptism of a child, a priest waiting’,20 would have been impossible in real life at that date. It might be explained by Saenredam’s interest in history, or perhaps by the wish of a Catholic client.21 The scene is however difficult to interpret. Elements in favour of a baptism are the light stole of the priest and the fact that he is standing in the baptistery. Against it are the absence of a godfather and godmother, necessary at a Catholic baptism (or is the man next to the priest the godfather?). The absence of the mother is not significant, since she was supposed to remain in bed nine days after giving birth. There is another possible explanation: a Catholic priest sometimes said prayers in a Protestant church, or delivered holy earth for a burial.22 The rather sober atmosphere and the dark cloth could suggest that this was a funeral service for a dead child rather than a baptism.23

Until now is has not been possible to untangle the provenance because various versions of the composition are recorded in 18th- and 19th-century sales, without dimensions. The Glasgow version was recorded in Alkmaar and Amsterdam between 1776 and 1800.24 It was reproduced in an engraving by Noach van der Meer II (1741–1822) in J.-B. P. Le Brun’s Galerie des peintres flamands of 1792 or c. 1787 in Paris (Related works, no. 3) [2], which seems impossible, as the picture was in the collection of Jan Jansz. Gildemeester (1744–99) in Amsterdam between 1777 and 1800. This indicates that perhaps a third version existed. Proof that the source of the print was (a version of) the Glasgow painting and not that in Dulwich is the presence in it of the Haarlem coat of arms. Le Brun was a business partner of Desenfans, and in the light of the engraving it is tempting to suggest that DPG59 may also have come from him. Could he have been the owner of two versions? 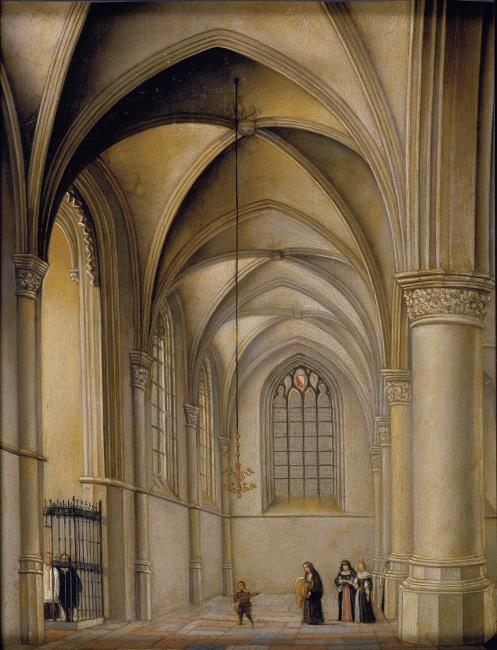 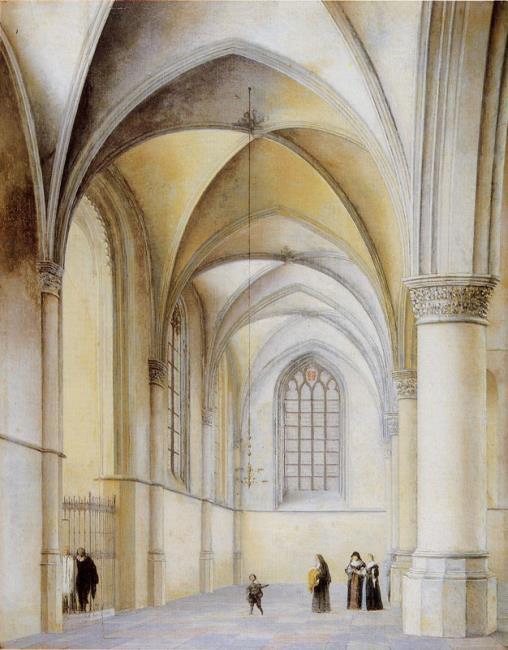 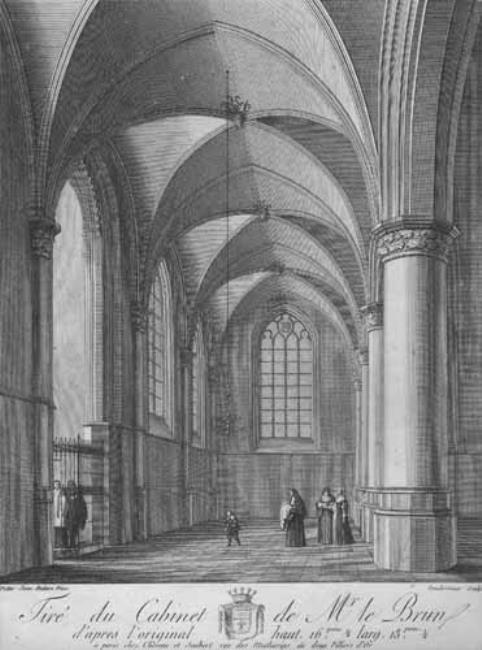 7 ‘Sanadram [sic]. Interior of a Cathedral. Correct drawing, and chaste, but cold colouring.’

9 ‘Saenredam is well known as an engraver; on what authority this picture is attributed to him I know not.’ Clearly she knows only the printmaker Jan Saenredam (c. 1565/6–1607), who was the father of Pieter, the church painter.

20 It is interesting how the scene was interpreted in the Dulwich catalogues after Denning (where the scene is not described): ‘A chapel on the left is used as a baptistery. A woman in black brings a child across the aisle towards the chapel, in which a priest and a man are seen. Two persons follow the mother, and a boy precedes her.’ Sparkes 1876, p. 158. After that somebody (Jean Paul Richter?) realized that it was unlikely that a Roman Catholic mother would be present at the baptism of her child, since the baptism should be done as soon as possible after birth. So in the next catalogue the mother has become a nun: ‘to the left, behind, the iron gate of the baptistry, a priest, and a gentleman waiting; in the nave a page, a nun carrying the baby, followed by two ladies, all approaching the baptistry.’ Richter & Sparkes 1880, p. 149.