Romeyn is a typical member of the second generation of Dutch Italianates. His œuvre consists chiefly of paintings and drawings of Italianate landscapes with shepherds and cattle, in the style of his teacher Berchem and his contemporaries Karel du Jardin (1626–78) and Adriaen van de Velde (1636–72). In his landscapes he often includes architectural motifs.

His work was popular in his lifetime and was engraved by several artists [1], and in the century after his death his pictures generally fetched much the same price as Du Jardin’s. Now, however, his work is largely unknown, mainly because of a lack of critical attention. 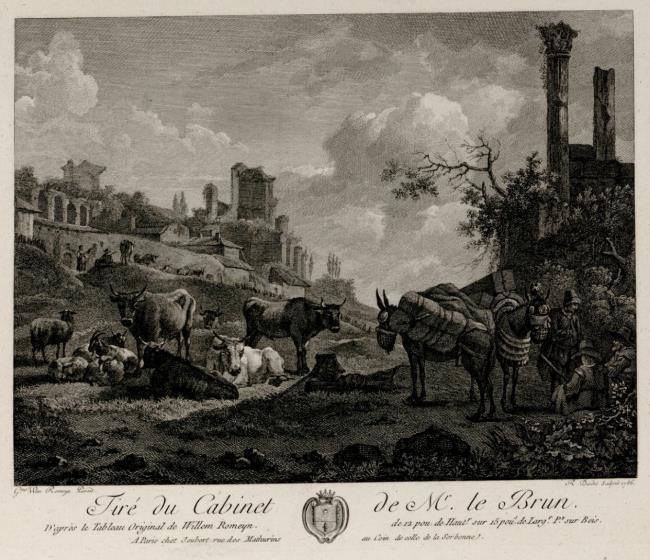 TECHNICAL NOTES
Plain-weave linen canvas. Grey ground. Glue-paste lined; the original tacking margins are present. The canvas is poorly attached to the lining. The verso is primed with a thick layer of preparation. There are areas of abrasion, particularly in the sky, where there are numerous small retouchings. Two old holes at the top edge in the left of the sky, and another near the bottom right corner. Previous recorded treatment: 1911, cleaned, Holder; 1953, Dr Hell; 1986, varnished and retouched, AMSSEE. 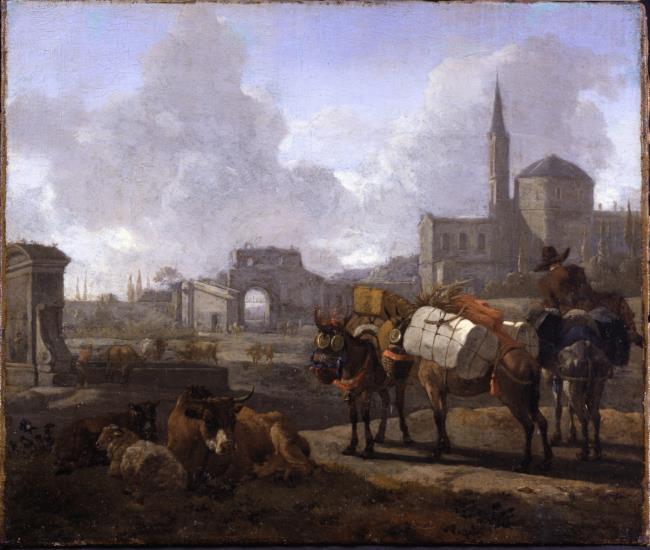 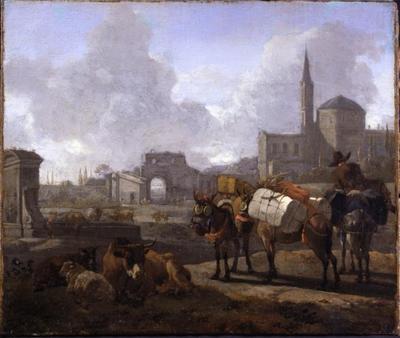 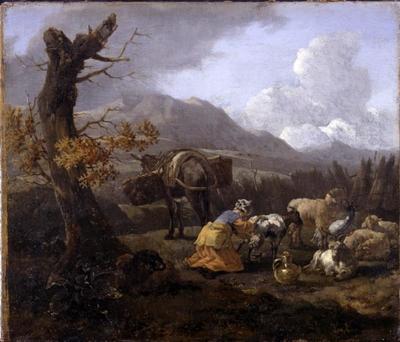 DPG5 – Italianate Landscape with a Woman milking a Goat

TECHNICAL NOTES
Plain-weave linen canvas. The ground is buff, with grey priming under the sky. Glue-paste lined; the original tacking margins are present. 4 mm at the left of the canvas is unpainted. Like its pair, DPG3, this painting’s stretcher appears to have been enlarged at some point, possibly at the same time as the lining was carried out. The lining is poorly attached to the original canvas. The verso is primed and there is an indistinct red seal on the reverse of the stretcher.15 There are areas of abrasion and restored old losses. Previous recorded treatment: 1911, cleaned, Holder; 1935, frame paraffined; 1953–5, Dr Hell; 1986, surface cleaned and some retouching, AMSSEE.

Although DPG3 and DPG5 are both signed, and Britton in 1813 gave the name as ‘Romayne’, in the earliest Dulwich catalogues both paintings are ascribed to Roghman, that is Roelant Roghman (1627–92), another Dutch landscapist, who specialized in painting castles and travelled in Austria and the Alps, but never in Italy.

DPG3 is an Italianate townscape, with from left to right a 17th-century fountain with cattle basin, a city wall incorporating an antique arch, and a Romanesque church with a Gothic campanile, which seems to be ‘an echo of St Gereon in Cologne; the spiky spirelet is an invention’.18 The rest of the architecture has not been identified (is it further meant to suggest Rome?): it seems likely to be either wholly imaginary or a composite of sketches the artist presumably made during his sojourn in Italy or Germany.

Similar in composition is a View of the Porta del Popolo in Rome, associated with Willem Romeyn (Related Works, no. 1) [2]; a similar reclining ox appears in another picture by Romeyn, sold in Cologne (Related works, no. 2) [3]; and what was presumably another similar picture was recorded on the London art market in 1830 (Related works, no. 3).

DPG5 seems to form a pair with DPG3, as they are close in size, but its composition, without architecture, is rather different. If they are a pair, they may represent city and country life. Costume and setting leave no doubt that the scenes take place in Italy, and the pictures are typical of the work produced by the second generation of Dutch Italianate painters. It seems that Romeyn painted them after his return from Italy. 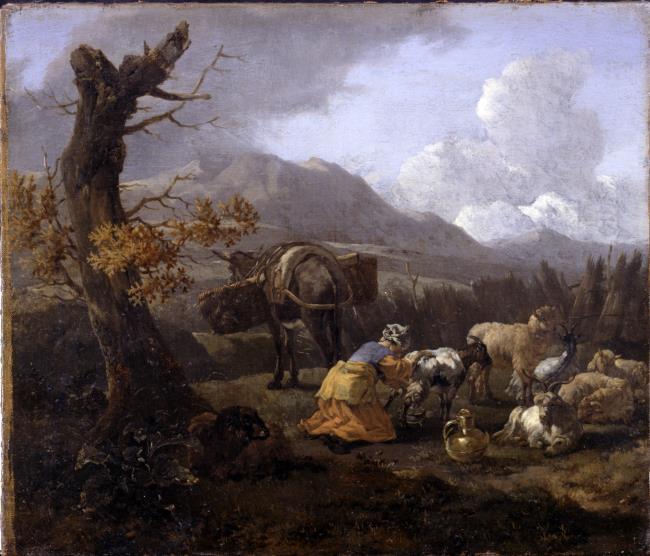 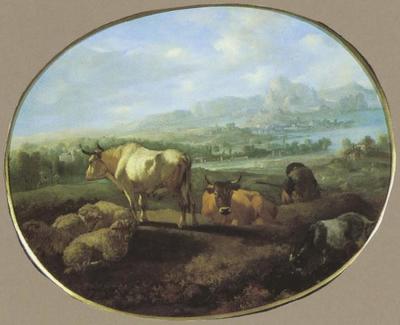 2 Both DPG3 and DPG5 have been re-stretched on to 18th-century stretchers. This makes it likely that the seal on DPG5 also dates from that time and is not that of Sir John Gayer (baptised 1584–1649), merchant and Mayor of London (1646), as once suggested by Mr Melvyn Jeremiah.

5 ‘The Companion to No. 8. Two small pictures, well composed, but cold in colour. Of the painter nothing is known; his manner is like that of Karel du Jardin, to whom, however, he is very inferior.’

6 ‘William Romeyn. – By this scholar of Berghem here are two carefully executed cattle-pieces, in his well-known grey tone, which, though the name of the master is on one of them, are called in the catalogue “Roghman.” (Nos. 8 and 10).’

7 In the biography of Romeyn, p. 144: ‘his name has been placed among “others who have left single works of great simplicity and beauty.”’

8 ‘Two companion pictures, harmonious in colouring, and clearly painted under the influence of Karel Dujardin.’

14 ‘A companion picture to No. 3; harmonious in colouring, and clearly painted.’

18 According to Dr Christopher Wilson, formerly at University College London, via email Emily Lane to Ellinoor Bergvelt, 5 May 2015 (DPG3 file).