The Thirty Years’ War led the family of Johann Heinrich Roos's [1] to flee from the Palatine to Amsterdam c. 1640. There in 1647 Roos he history painting in the studio of Guilliam du Gardijn (1595/6–1647/57), landscape painting from Cornelis de Bie (1622–64; not to be confused with the eponymous author of Het gulden cabinet vande edele vry schilder const, Antwerp 1661), and portraiture from Barent Graat (1628–1709). However for his main subject, animals in an Italianate landscape, he was influenced by Nicolaes Berchem (1621/2–83) and Karel du Jardin (1626–78). He never went to Italy, but based his ruins and landscapes on engravings by other artists. In 1651–2 Roos returned to Germany, where he worked in Mainz in 1653 and at Rheinfels for the court of the Landgrave of Hesse from 1654 to 1659; in 1664 he became court painter to the Elector Palatine in Heidelberg. He painted portraits of German princes and the Frankfurt bourgeoisie, but is best known for his animal paintings and his idealized pastoral landscapes. He was popular in Germany and the Netherlands until the first half of the 19th century. 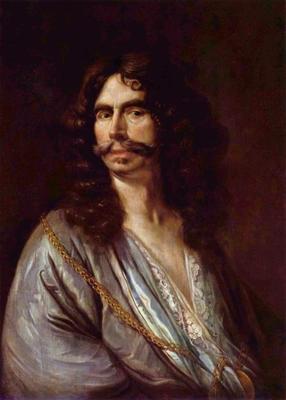 DPG617 – Landscape with a Cowherd, Cattle, Sheep and a Goat

Mahogany panel, 61.6 x 74.6 cm
Written on the back: ‘Paulus Potter, a shepherd at the foot of a cascade guarding cattle. R. Broads Gift (Camb.)’

TECHNICAL NOTES
Three-member mahogany panel with horizontal grain. Paint is thinly applied with little impasto. There are two sliding vertical battens with wedges on the reverse. There is damage to the corners and two dark cracks are visible in the top right quarter of the painting. The reverse is primed. The paint film is in good condition with fine light craquelure all over. There are localized cracks around knots in the panel, and some light wear is visible in the silhouetted trees. The varnish is discoloured and reticulated. Previous recorded treatment: no early treatment records; 1988, examined, Courtauld Institute.

Fred Meijer (RKD) suggested the attribution to Johann Heinrich Roos in 1997. That seems justified. The three main characters in the composition, the two cows and the standing sheep, also appear in a picture by Roos in Dresden, signed and dated 1681 (Related works, no. 1) [2]; their positions are different: there the cow lying down is at the right, and the standing sheep is in the background. 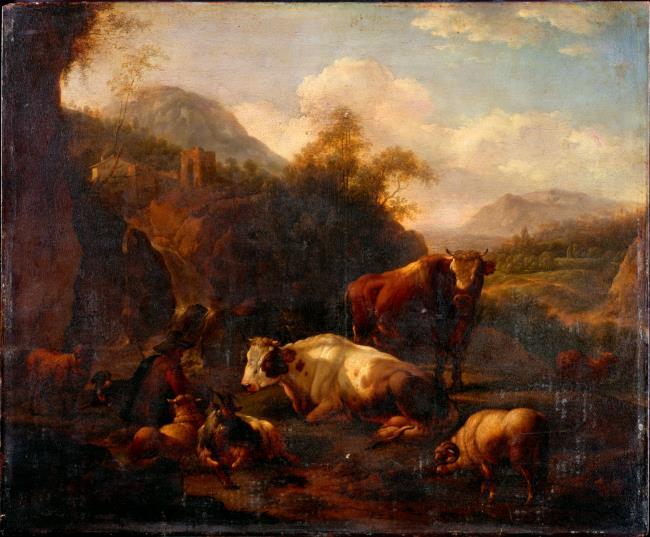 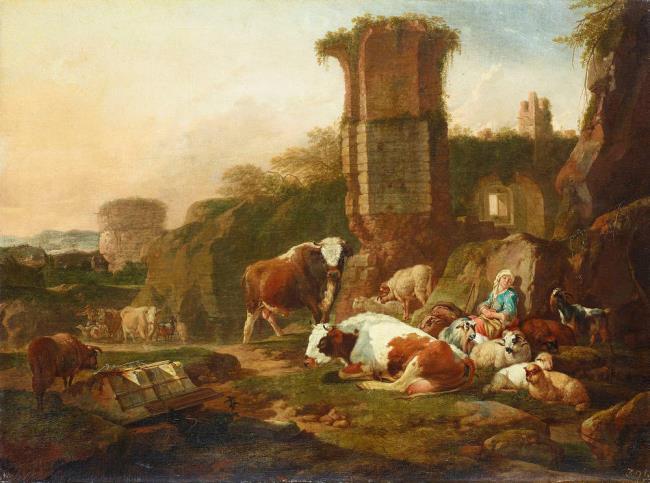 1 The picture was offered to Dulwich by Professor C. D. Broad of Trinity College, Cambridge, in 1945, together with DPG614 (Studio of Teniers), DPG615 (Cornelis Pronk), and DPG616 (pasticcio after Jan Wijnants). In his letter he said that the four paintings had been in his family for a long time.

2 On 22 Nov. 1945 the offer to bequeath four paintings was received; Sir Gerald Kelly would go to Trinity College, Cambridge; in the meeting of 25 July 1946 Kelly had no hesitation in recommending that the pictures should be accepted; they are accepted.