Cornelis Pronk was a student of the now almost forgotten artist Jan van Houten (1679–1713) and the well-known Amsterdam portrait painter Arnold Boonen (1669–1729). He was probably Boonen’s pupil from 1712 until 1715. In that year he became a member of the Amsterdam Guild of St Luke. His early career was spent in Alkmaar and Amsterdam, painting portraits and working as a copyist of 17th-century Dutch masters, like so many Dutch artists of the 18th century. In the 1720s he switched to producing topographical drawings, not only of many Dutch cities but also of nearby German towns including Cleves and Cologne. Four of his sketchbooks are in the Rijksprentenkabinet in Amsterdam. From 1734 he made designs for the decoration of porcelain imported from China by the East India Company. It is for his topographical drawings and porcelain designs that he is best known today. 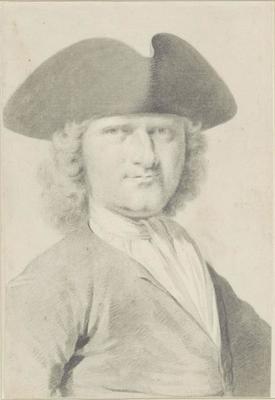 TECHNICAL NOTES
Plain-weave linen canvas. Glue-paste lined; the original tacking margins have been cut. There is red paint on the reverse. There is a roughly painted addition along the top, and the right edge is made up and retouched. The paint surface is cupped, particularly along the left edge, and there is some blistering. The coat has probably faded somewhat. There is bloom in the old varnish. Previous recorded treatment: 1946–53, Dr Hell.

While Pronk’s portraits are little known today, there are indications that he painted some eighteen people, among them artists including Ludolf Bakhuizen (1630–1708), Jan de Beijer (1703–80) and Pieter Langendijk (1683–1756).5 He also made a portrait of Lambert ten Kate (1674–1731), a famous linguist and connoisseur, who had been instrumental in Pronk becoming an artist, and who remained his friend.6 He seems to have favoured posing his figures as here, with one arm resting parallel to the edge of the picture, and, framed by drapery, an architectural detail in the background (Related works, nos 1, 2) [2-3]: here there is what appears to be an elaborate (imaginary?) marble fireplace. It is curious that Pronk painted and signed this picture in 1714, as he was at the time still a pupil of Boonen, and was to become an independent master only in 1715.

The sitter wears a scarf and a silk banyan, a loose robe of Asian cut known in Dutch as Japonsche rock (Japanese dress), that was worn indoors on informal occasions. There was a fashion for male portraits in such dress throughout Europe in the 18th century. His desk is littered with letters, receipts, a seal stamp and an hourglass, and he is writing in a cash book, which suggests that he is a merchant. His identity is unknown, but his features are somewhat similar to those of Jacob Meerman (1647–1712), in a portrait by Thomas van der Wilt (1659–1733; Related works, no. 3) [4]: if it is indeed him, the Dulwich picture would be a posthumous portrait, as Meerman died in 1712.

The valuation by Thomas Agnew and Sons in 1949 assessed DPG615 at £175 (the cheapest of the sixteen Dulwich paintings then assessed was an Adriaen van de Velde at £100, and the most expensive Rembrandt’s Girl at a Window at £33,000).7 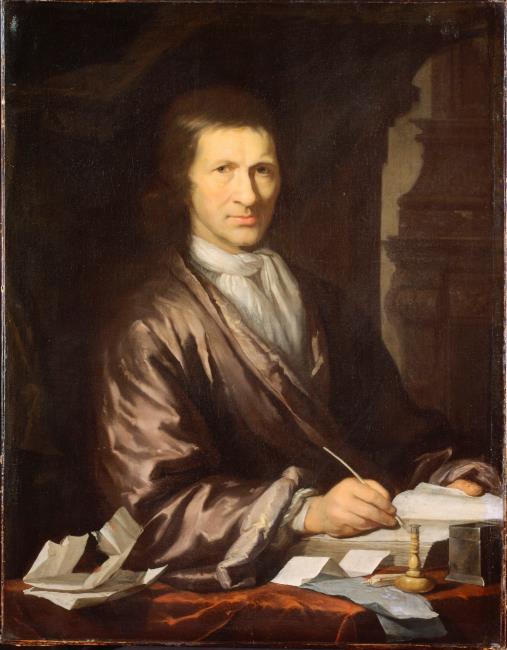 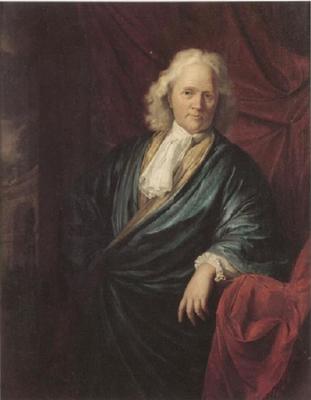 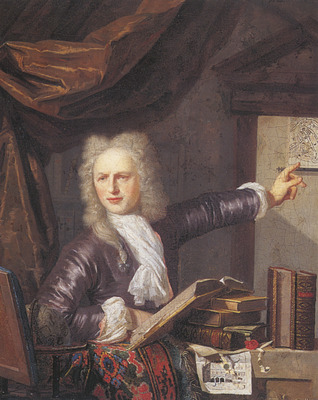 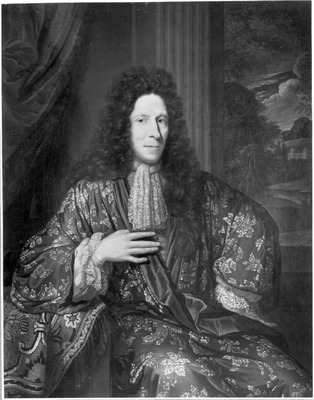 1 The picture was offered to Dulwich by Professor C. D. Broad of Trinity College, Cambridge, in 1945, together with DPG614 (Studio of Teniers), DPG616 (pasticcio after Jan Wijnants), and DPG617 (Johann Heinrich Roos). In his letter he said that the four paintings had been in his family for a long time.