TECHNICAL NOTES
Single-member oak panel with vertical grain and bevelled edges. Thin light grey ground. There is a 4-cm hair-split running downwards near the top left corner. There are rough chisel marks on the back of the panel, and what appear to be inactive worm channels. The reverse bears a label stating the subject and referring to the sixteenth chapter of Genesis, and a wax seal with a coat of arms. There is a gouge in the left figure’s back and some wear and a dent in the shadow of the central figure’s face. The varnish layer is discoloured and remnants of old varnish are still present along the panel grain, particularly in the left-hand figure; some of these have been retouched. Previous recorded treatment: 1953–5, Dr Hell.

Although DPG455 was previously catalogued as Flemish – the 1905 entry suggesting Frans Pourbus the Younger (1569–1622) – Pieter van Thiel, curator of the Rijksmuseum, considered that it is definitely a product of the Prague School, very reminiscent of Bartholomeus Spranger (1546–1611), from the mid-1580s.11 He could not find a painting or print of the subject by that artist, and the rather loose style, especially visible in the figure of the woman and the drapery, does not suggest a copy. If we broaden the scope to late 16th- and early 17th-century painters in Prague and the surrounding area the names of several artists occur: Johann Mathias Kager (1575–1634; Related works, no. 1), Joseph Heintz I (1564–1609; Related works, nos 2a–2c), and Jeremias Günther (1575/80–after 1633; Related works, no. 3).

Van Thiel also doubted the identification of the subject, because the sphinx on the right does not fit with the biblical story in Genesis (16: 1–6), where Abraham’s barren wife, Sarah, presents him with a surrogate, her Egyptian maid Hagar (for depictions of the Hagar story at Dulwich see DPG131 by Rubens and DPG32 by a follower of Pier Francesco Mola (1612–66); indeed, in depictions of the Genesis story there is no reference to Hagar’s Egyptian origin. Van Thiel also rejected the mythological story of Hercules and Omphale as the possible subject.

Emil Reznicek identified the subject of a painting by Gerard van Honthorst (1592–1656) in Vienna, known as the Steadfast Philosopher (Related works, no. 4) [1], as Phryne and Xenocrates. In that story, told by the Roman author Valerius Maximus, the prostitute Phryne took a bet that she could seduce the philosopher Xenocrates. When she failed and was asked to give the money back, she refused, saying: ‘I thought I was dealing with a man, not a statue.’ In the Honthorst painting the ‘statue’ is, rather hidden, the decoration of a table.12 In DPG455 it is far more visible in the lower right-hand corner. However in the Honthorst picture the philosopher is indeed steadfast, as he is warding off the overtures of Phryne. That is not so much the case in DPG455. The man here is half-naked, which is however in accordance with one of the versions of the Phryne and Xenocrates story.13 If we interpret the subject as the ‘Steadfast Philosopher’, the old woman in the background is not Sarah but the ‘madam’ who acts on behalf of the prostitute.

The sphinx in the lower right-hand corner also appears in scenes with a strong sexual content, for instance in a drawing by Joseph Heintz in Vienna and in a painting by Jacques Jordaens I (1593–1678) of Joseph and Potiphar’s Wife (Related works, nos 6 and 7) [2], a biblical story set in Egypt. In a drawing by Pieter Isaacsz. (1568–1625) of Jupiter and Antiope, another bedroom scene, a piece of furniture has a caricatural sphinx head (Related works, no. 8) [3] which is similar to the sphinx in DPG455.

In other depictions of Phryne and Xenocrates – a rare subject – the philosopher is shown reading books, and often actively rejecting her (Related works, no. 5). The question is whether DPG455 really depicts a ‘Steadfast Philosopher’: it does seem more related to those scenes than to the biblical story of Hagar, Abraham and Sarah. 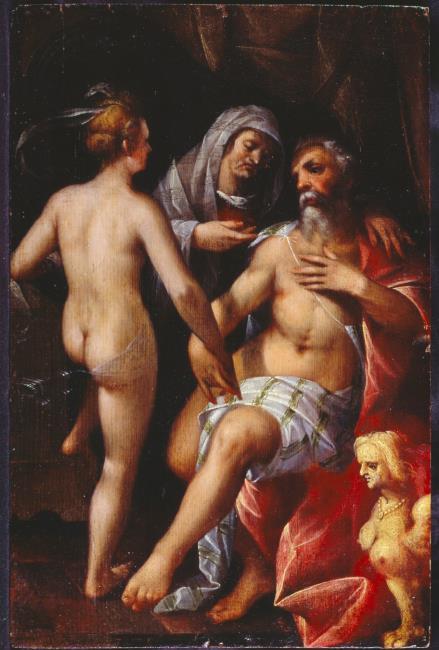 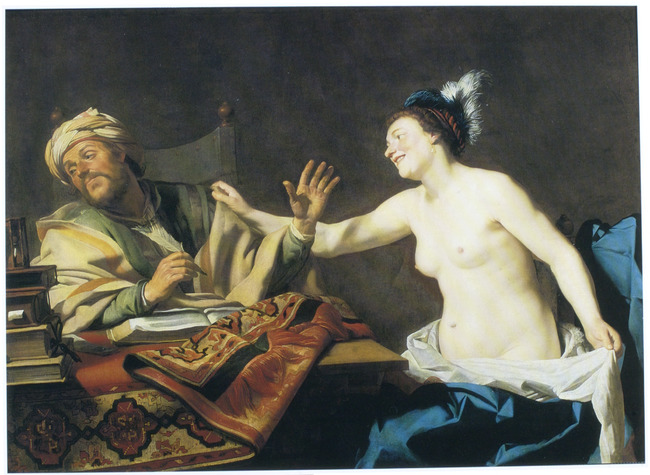 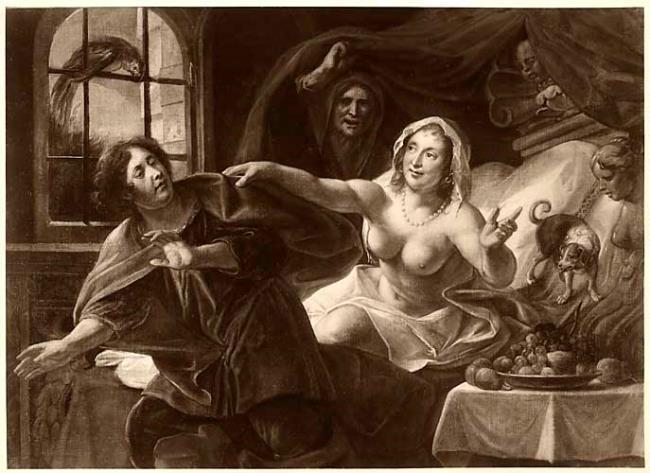 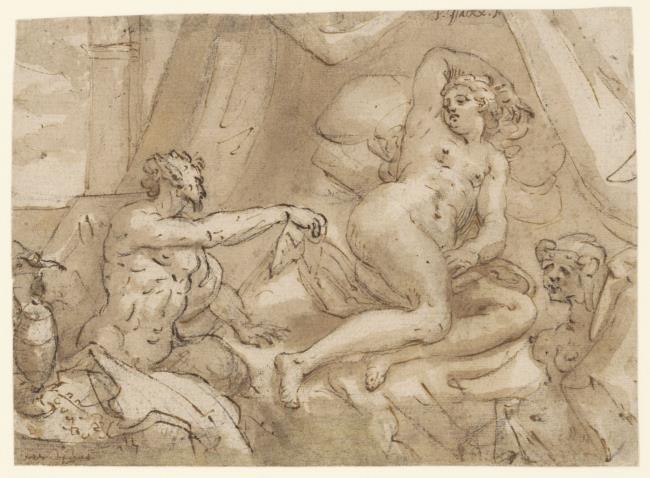 11 Letter from Pieter van Thiel to Peter (Hecht? How it came to DPG is not clear), 1 March 1996 (DPG455 file): Het is beslist Praags. Erg Spranger-achtig. Maar ik heb geen voorbeeld (mocht het een kopie zijn) gevonden. Ook geen prent. Midden jaren tachtig, lijkt me. Wat stelt het eigenlijk voor? Wel een sfinx maar verder geen knots of spinrok, dus niet Hercules en Omphale.* [* Hoezo Hagar and Abraham? Abraham met sfinx? Lijkt me geen bijbels onderwerp.] (It is definitely from Prague. Very Spranger-like. But I have not found the original (if it is a copy), or a print. Mid-[15]80s, I think. What is indeed the subject? There is a sphinx, but no club or distaff, so it is not Hercules and Omphale.* [*Why Hagar and Abraham? Abraham with a sphinx? Doesn’t look like a biblical subject].)