Paulus Potter [1] was the son of the little-known painter Pieter Potter (c. 1597/1600–1652). After moving to Amsterdam with his family some time before 1631, he was active in his father’s workshop, producing history subjects under the influence of the Amsterdam history painter Claes Moeyaert (1591–1655). In 1642 he is recorded as having paid Jacob de Wet I (c. 1610–77/91), also a history painter, for painting lessons. In the mid-1640s he turned to portraying animals. In 1646 and 1649 respectively Potter joined the painters’ guilds of Delft and The Hague. He began to specialize in small-scale animal studies, although he occasionally produced much larger pictures, such as the more than life-size, and very famous, Young Bull of 1647 in the Mauritshuis [2].1 In 1650 he married the daughter of the city architect of The Hague, where he seems to have been living, and he also began to receive commissions from Amalia van Solms-Braunfels (1602–75), the widow of the Stadholder, Prince Frederik Hendrik of Orange (1584–1647). In 1651 he was sued for failing to deliver commissioned paintings. In the following year he moved to Amsterdam, where he painted an equestrian portrait of Dirck Tulp (Six collection, Amsterdam) [3].2 Potter died of tuberculosis.

Potter was the third Dutch 17th-century painter about whom a monograph was published in the Netherlands in the 19th century (1867), only just after Rembrandt (1853) and Jan Steen (1856), a clear sign of his canonical status.3 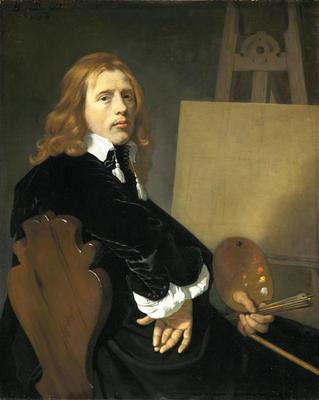 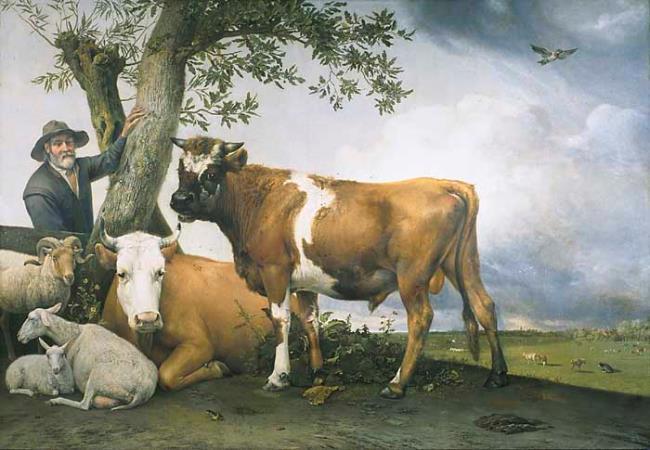 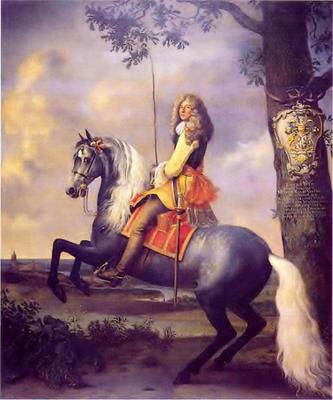 TECHNICAL NOTES
Two-member oak panel. The verso edges are bevelled. There is considerable discoloured restoration in the sky and on the distant horizon, and very slight blistering of the paint in this area. The ‘Paulus Potter’ signature at the bottom right is false. The varnish is thick and discoloured. Previous recorded treatment: 1934, several old holes in panel treated with light application of paraffin.

This is a typical Potter composition, significantly better than the other works at Dulwich formerly attributed to him. It would appear to be a copy after a lost composition by the artist. After the 2016 catalogue was published Charles Dumas brought to my attention a drawn copy by the 18th-century Dutch artist Gerrit Dadelbeek (1731–81), now in a private collection in Munich (Related works, no. 2a) [4]. That drawing, which has about the same dimensions as DPG334, has an inscription that refers to the original by Paulus Potter (Related works, no. 1), which was sold in Amsterdam in 1771 from the collection of the very famous Amsterdam collector Gerret Braamcamp (1699–1771) [5]. At that auction both the Potter picture and the Dadelbeek drawing were for sale, which suggests that Dadelbeek had made the copy for Braamcamp, who was in the habit of having contemporary artists make copies of works in his collection.9 In 1795 the Potter picture was in London, but after that its whereabouts are unknown. The Dulwich copyist left the carriage with the horses out. Two other copies of the composition are known (Related works, nos. 2c and 2d). Both were – falsely – signed and dated 1650, and almost identical in size to the Dulwich picture. Significant differences, however, are that neither includes the sheep visible here, and that the second copy omits the village in the background and adds another branch to the tree. A similar or largely identical composition may be that described by Hofstede de Groot (Related works, no. 2b). 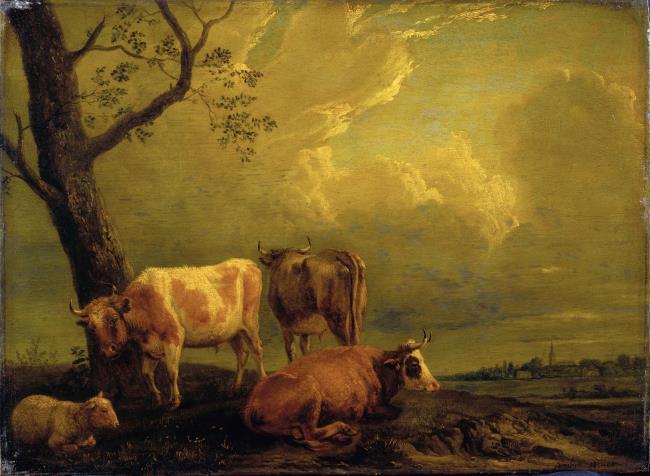 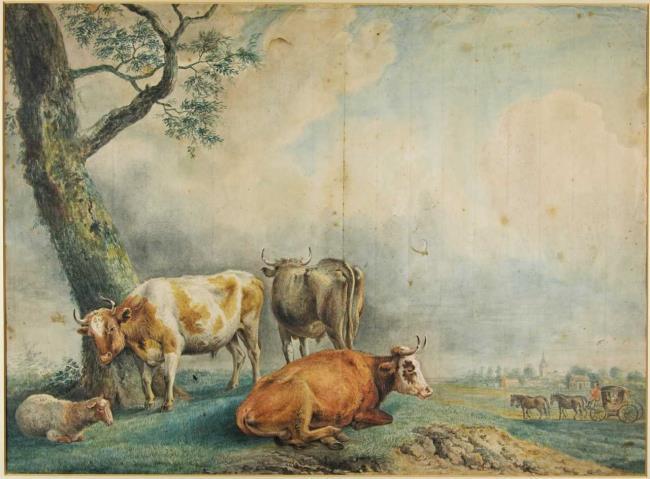 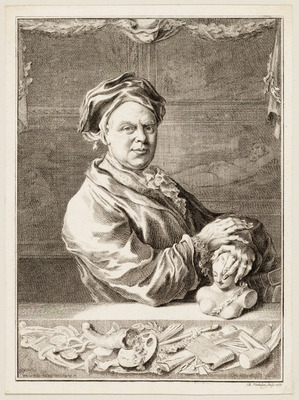 Oak panel with additions on all sides. The additions are not properly joined to the panel and the gaps are visible and very distracting. There is a crack in the lower addition where it has been stuck to the central panel. The reverse is very thinly primed or painted. The paint of the left addition appears darker than that of the central panel. The varnish is very discoloured. No previous recorded conservation treatment.

The painting is a mediocre attempt at the style of Potter, and it is not inconceivable that it was produced by Sir Francis Bourgeois, who almost certainly made additions to the sides to produce dimensions similar to DPG51 by Adriaen van de Velde (1636–72). The two paintings were described as a pair in the 1813 inventory of Bourgeois’ collection. The pose of the reclining cow is very similar to another work at Dulwich once attributed to Potter, DPG334. 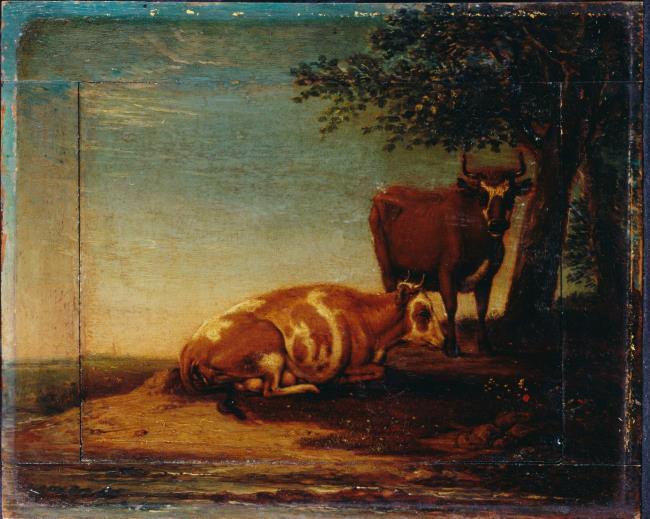 After Paulus Potter
DPG343 – A Cow

TECHNICAL NOTES
Plain-weave coarse linen canvas laid on panel. The main support is a single-member oak panel with an addition of similar wood with different grain on the right edge. The verso edges are bevelled. The ground is light red. The paint is thickly applied. The canvas seems well attached to the wooden support except for the area of the join. There is fine cupping in the trees above the cow, showing the ground in places. There is abrasion in the shoulder of the cow and in the tree trunk. The varnish is discoloured and uneven and is slightly scuffed in places. There is some surface dirt, particularly in the dips of the impasto. Previous recorded treatment: 1953–5, Dr Hell.

Although it first appeared in Bourgeois’ collection as by Potter, A Cow was demoted to ‘Dutch School’ in 1880, and remained there until 1998, when Richard Beresford presented it as ‘Manner of Potter’. This seems fair, as the picture is stylistically in keeping with that artist’s work, though it is clearly not by him in quality, nor does it follow any of his known compositions. Until more is known of the many artists who copied, pastiched, or imitated Potter’s work, during his lifetime and after his death, the Dulwich picture must remain anonymous. It is however easy to agree with Denning’s judgment in 1858 that it is ‘a fine study’. The ‘Van Hagen’ that he suggested had painted it was probably the landscape painter Joris van der Haagen (c. 1615–69) of The Hague.

Most of the animals in Potter’s paintings are at rest or grazing; this cow is not. There is some similarity with the standing bull in Cattle and Sheep in a Stormy Landscape in the Nationa Gallery (Related works, no. 1) [6]. DPG343 may be a fragment of a much larger composition. It is probably because of the positive comments of Denning and Sparkes that it hung in the Gallery at least until 1892. 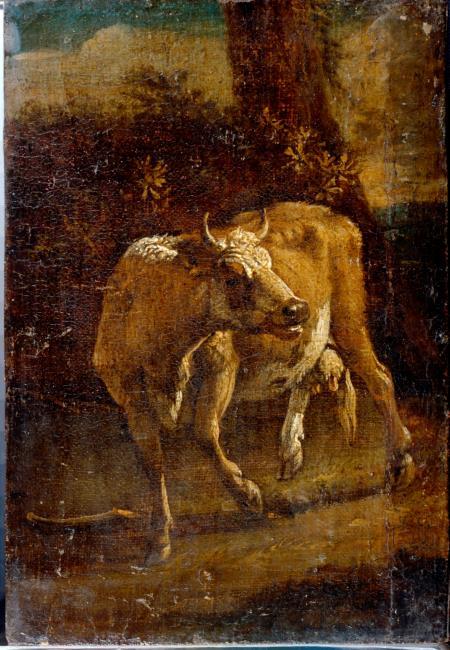 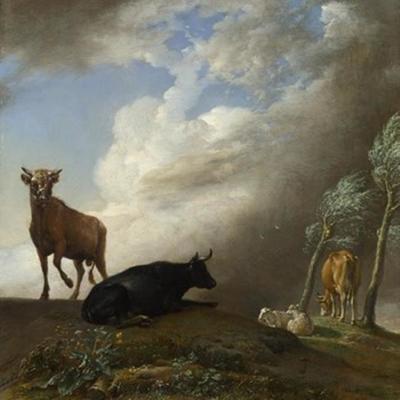 4 ‘His merits must not be judged by this little picture; his finest works now in England are in the private collections of her Majesty, the Marquis of Westminster, and Lord Ashburton.’

5 ‘This is perhaps an original but as Mrs. Jameson says “his merits must not be judged by this little picture.”’

7 The inscription says that the original was by Nicolaes Berchem (1621/2–83), which is clearly a mistake, since no. 170 in the sale catalogue is a picture by Paulus Potter (see Related works, no. 1). Provenance: Amsterdam, coll. Gerret Braamcamp; his sale Amsterdam, 31 July–3 Aug. 1771 (Lugt 1950), p. 144, Konstboek A. Waarin gecouleurde tekeningen (Album A with coloured drawings), no. 62: Drie Ossen en een Schaap, staande en rustende by een Boom op een grasigen heuvel; in ’t verschiet ziet men een koets met vier Paarden bespannen, en wat verder een Dorpgezicht; getekend door DADELBEEK, naar ’t origineel van Ps. Potter, dat in dit Kabinet word gevonden, (pag. 71. No. 170.)’ (Three Oxen and a Sheep, standing and resting by a tree on a grassy hill; in the distance you see a carriage with four horses, and a little further on a view of a village; drawn by DADELBEEK, after the original by Ps. Potter, which is in this cabinet, see p. 71, no. 170). Purchased Ploos van Amstel ƒ14:10:-. See Dumas 2021a, fig. 1.

9 As appears in the sale catalogue of 1771, where several drawings are mentioned which are copies of pictures in the same collection by Dadelbeek and other artists; see also Bille 1962, i, p. 45 (Dadelbeek) and pp. 46–7 (Willem Joseph Laquy).

10 Hofstede de Groot suggested that DPG324 was a picture that Bourgeois bought from the London dealer Michael Bryan (Christie’s, 28 April 1798, lot 82, ‘Potter – A small landscape with cattle, and figures, a beautiful cabinet picture of this scarce and admired master’, bt Sir F. Bourgeois for £15.15), but that seems unlikely since it lacks figures.

11 ‘This is probably the picture which Bourgeois bought at the Bryan sale in 1798 for 15 guineas.’ That is not likely: see the preceding note.

12 ‘This is a piece cut out of a larger picture, and may be by Paul Potter, but more probably by some one of his numerous followers. It has been suggested that Van Hagen (1635–1679) painted it.’