British (or Netherlandish) School after a print by Jan Harmensz. Muller, after Bartholomeus Spranger
DPG511 – Oreads removing a Thorn from a Satyr’s Foot

TECHNICAL NOTES
There is an old vertical split on the top left side, which is now slightly loose. The reverse of the panel has been primed in orange paint, then painted dark brown. On the front the paint is very thin, with the wood grain showing through everywhere, and there are various minor areas of damage with old retouchings. The surface coating is very shiny and dark, with a few fingerprints on it, and a heavy layer of surface dirt. There is no record of any previous conservation treatments for this painting.

A very crude copy of an invention by Bartholomeus Spranger, one of the few examples in the Dulwich collection of a Mannerist composition originating in Prague (see also DPG455 and DPG353). It was probably made by a British or Netherlandish artist in London, where Cartwright must have purchased it. It depicts a satyr having a thorn removed from his foot by an oread, a nymph of mountains and hills in Greek mythology.6 She is stooping to examine his foot (and wearing spectacles in the print and drawing, not in DPG511). A weeping oread puts her arm around the injured satyr and rubs her eye; a young satyr helps by holding up the injured leg. At least that is the interpretation of the print which must have been the model for DPG511; formerly the main figure was called a ‘faun’. The very young (he was nineteen) Jan Harmensz. Muller (1571–1628) made his engraving in 1590 in Amsterdam (Related works, no. 1) [1].7 It is likely that Spranger’s drawing now in Brussels was the model that Muller used (Related works, no. 2) [2]. Muller’s engraving seems to be the source of the Dulwich picture, because its orientation is the same. Muller was the principal engraver of Spranger’s works starting in the early 1590s; they were in close contact, sending drawings and prints back and forth between Prague and Amsterdam.8 This engraving was widely disseminated, frequently copied both in the Netherlands and in Italy (Related works, nos 3–6) [3], and seems to have gone on being issued until the 1670s.9

Spranger’s invention was probably not derived from a specific Classical source,10 but he made up a story, also devised to exploit the expressive potential of the elongated bodies and elaborate poses. In the lower margin of Muller’s print there were successively two different inscriptions in Latin,11 which effectively said that it was no use to stand by crying sympathetically (as the standing oread does): you should actively help (as the other oread does by removing the splinter from the wounded foot, and the little figure does by holding the leg of the injured satyr) – i.e. not words, but deeds. It seems that the (amateur) copyist who made DPG511 was not interested in the meaning of Muller’s print, and also in the inventory of the Amsterdam printseller Clement de Jonghe (1624/5–77) in 1677 the plate is unceremoniously called ‘Splinter trecker [‘Splinter puller’] Spranger’.12

The painting entered the collection as part of the Cartwright Bequest, in whose inventory it was mistakenly described as depicting Venus and Adonis. 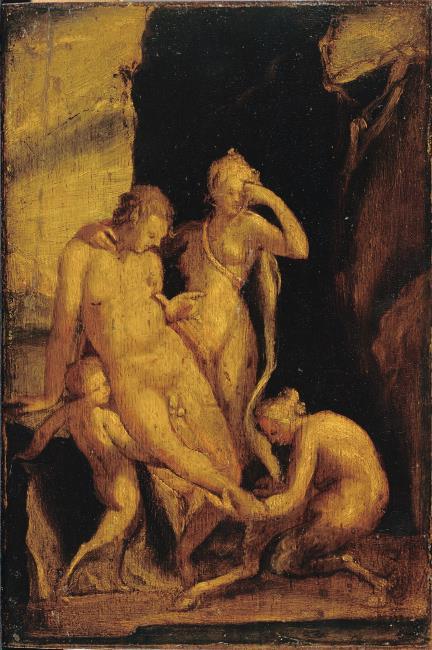 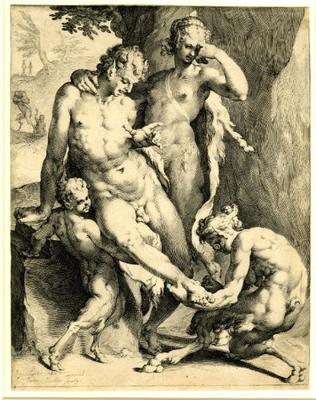 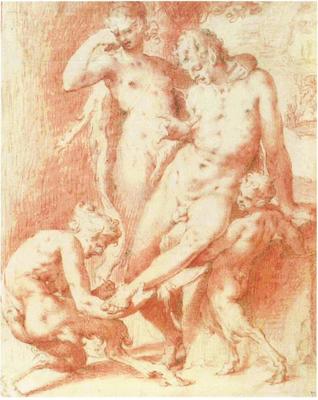 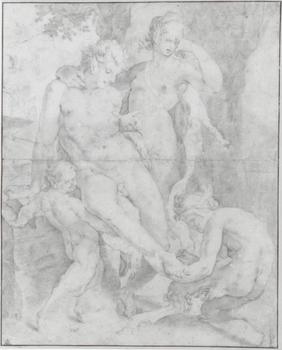 5 Naumann 1909, pp. 2–3 (as the original by Spranger, rather than by Wtewael, as it was called in the collection at Gaussig); Diez (1909, p. 133) rejected the attribution to Spranger and considered it to be a copy (by Wtewael?) after Muller’s print.

8 Leeflang 2008; the prints were based on drawings especially made for them, not on paintings.

10 The Latin texts on the fourth and fifth states of the engraving (see note 11) are, Ilja Veldman considers, of a type confected by professional or amateur poets, who were probably paid by the publisher: email to Ellinoor Bergvelt, 6 March 2017 (DPG511 file).

11 According to Filedt Kok (et al. 1994–5, i, p. 233, note 35), after three states without lettering the fourth state bore the inscription Sympathos haud iuvat, ast Miserans Misero auxiliatur (Sympathy does not help, but the one pitying assists the pitiable person). That was replaced in the fifth state by Nil iuvat afflictis moerentem ostendere vultum /Ipsa manus tantum sedula praestet opem (It does not help the afflicted to show a grieving face; let only the zealous hand offer help). ‘One might suspect that Spranger was aware of the texts that Muller placed under his designs and had given them his approval, as Spranger was sent proofs from Amsterdam, but we cannot be sure’: email from Huigen Leeflang to Ellinoor Bergvelt, 13 March 2017; DPG511 file).