TECHNICAL NOTES
Fine plain-weave linen canvas, glue-lined onto coarse similar; the adhesion between the two canvases is poor. The tacking edges of the lining canvas have degraded and were previously coming away from the stretcher; in 1994 they were consolidated and re-attached. Overheating (probably during the lining process) appears to have emphasized the canvas weave; stretcher bar marks are visible around the sides. The paint is thinly applied, with a little impasto in the jewels on the turban. A fine network of cracks is visible on the face, and elsewhere the craquelure is more pronounced. The varnish coating is an impenetrable, heavy natural resin and is a very dark brown colour. Previous recorded treatment: 1988, examined, Courtauld Institute of Art; 1994, edges of lining canvas consolidated and re-attached to stretcher, worst areas of lifting paint consolidated, S. Plender and N. Ryder.

No-one has succeeded in writing anything substantial about this painting. The early catalogues, assuming it to portray the Jewish historian Flavius Josephus (37–100), who lived in the first century AD, tell of his publications. The man looks Eastern, with his turban decorated with a jewel, but not especially Jewish. This may well be a tronie and not a portrait. Tronie (literally ‘face’), is a 17th-century Dutch and Flemish genre showing an exaggerated facial expression, or a stock character in costume, as here.1 It is not clear from which collection this picture came; it is one of several that were recorded in Dulwich College in 1890. It was probably painted in England, possibly by an artist trained in the Netherlands. 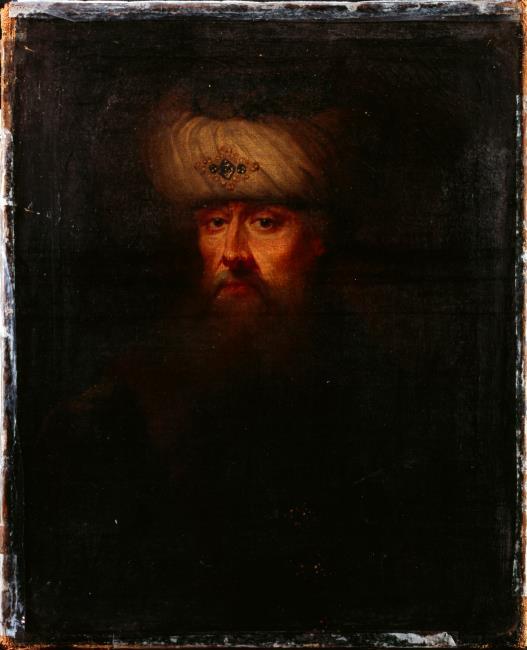