PROVENANCE
Cartwright Bequest, 1686 (no. 119, £2, ‘A woman in a green mantell a chaine of pearle on her head on a bord in a black frame fileted with gould’).

TECHNICAL NOTES
The appearance is very poor. The panel consists of two vertical members. The paint surface has a history of flaking, and some areas remain a little unstable. There has been considerable paint loss, most noticeable at the left side, and heavy old overpaint remains in many parts. Previous recorded treatment: 1991, cleaned, consolidated and repairs to panel, V. Leanse; 1992, consolidated and repairs to panel, N. Ryder.

The strength of the colour and the care with which the accessories are painted suggested to Jeffree a Flemish hand trained in Antwerp. DPG404 was probably made in London in the 17th century by a Flemish-trained artist, as it is likely that such cheap pictures (valued in 1686 at £2) were recently made in the city where they were acquired by William Cartwright before 1686. However there are also some Italian elements, and the elegance, clothing, hair and jewelry point to an Italian Mannerist artist. A similar lady with comparable jewelry and informal dress appears in a picture in the Château of Anet, recently acquired for the Château and attributed to Francesco Salviati (1509–63; Related works, no. 1) [1]. Salviati had worked in France around 1554. That the lady was supposed to represent Diana can be deduced from the presence of a quiver over her shoulder. The attribution to Salviati was based on a stylistic comparison with Salviati’s frescoes in the Palazzo Sacchetti and Palazzo Farnese in Rome.2 The Dulwich picture was clearly not intended as a portrait, and the lady not necessarily as Diana, because there is no quiver or other attribute of Diana. The jewelry and costume suggest a date for the original in the mid-16th century. As with other Cartwright pictures the source may have been a print after a painting like the one in Anet, but none has so far been found. 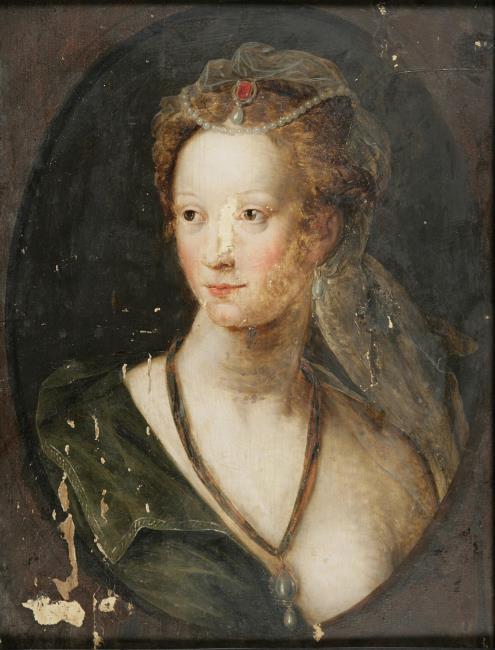 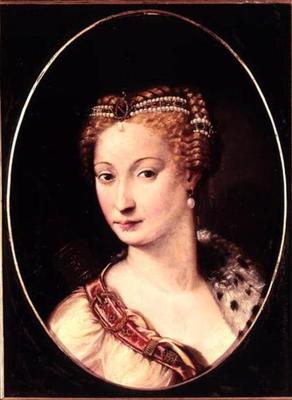 2 However in the meantime the sitter had been identified as Diane de Poitiers (1500–1566) and the painter as Francesco Primaticcio (1504–70), also an Italian Mannerist artist, who had primarily worked in Fontainebleau and Paris between 1532 and 1570. The Château of Anet was built for Diane de Poitiers from 1548, and she died there in 1566. The painting in Anet had been visible on the website of the Château (July 2020), but later (Aug. 7, 2020) on https://www.chateau-d-anet.com/galerie-le-chateau only a detail of the painting (the face of Diana) is shown, next to the name of the castle, as a kind of logo, without further information about it.