TECHNICAL NOTES
The edges were made up and retouched to the stretcher size, most likely when the canvas was lined. Two unsightly areas of blanched restoration in the lower part of the sky. Other older retouchings in the sky and the figures on the left, and some paint blisters at the edges. The varnish has yellowed. Previous recorded treatment: 1911, relined and likely restored, Holder and Morrill; 1953–83, Dr Hell.

DPG174 is a more or less topographically correct view of the Forum Romanum, where at the time cattle were browsing among the Roman ruins, hence the name ‘Campo Vaccino’ (Field of the Cows). Andries Both, to whom the figures here are attributed, was in Rome probably from 1633. The painter of the townscape is probably to be found among the Dutch artists in the circle of Claude, who was working in Rome with the Both brothers and Herman van Swanevelt for the Buen Retiro Palace from 1639 to 1641.14 They probably all knew each other before 1639.

The earliest references to this painting in Dulwich sources gave Claude as the artist, until Mrs Jameson began to doubt its authorship. In 1858 Denning believed it to be a Claude, but suggested another painter for the staffage. From then on it was considered to be a good contemporary copy of Claude’s painting in the Louvre of c. 1636, which Claude had painted for the French ambassador in Rome, M. de Béthune, with a different group of figures bottom right (Related works, no. 2) [2]. Claude’s painting in turn was based on a painting by Herman van Swanevelt now in Cambridge, possibly dated 1631, with a totally different staffage and architecture fragments differently distributed in the foreground (Related works, no. 1) [1]. The only other major difference is that Claude shows a larger part of the Arch of Septimius Severus on the left. According to Roethlisberger, Claude never made a painting so closely related to a work by another artist.15 It seems that apart from this instance Claude did not copy or let himself be inspired. Claude also made an etching and two drawings of the same scene around this time (Related works, nos 3–5).

According to Roethlisberger, ‘The precise, fluid handling, clear colours, and reddish-brown tints [of DPG174] are not based on Claude but imitate Swanevelt, without quite achieving his refinement.’16 So possibly the copyist knew both the Swanevelt of 1631 (?) or other Swanevelt pictures and the Claude of 1636. DPG174 was attributed to Swanevelt by David Howarth in 1985.17 However Sue Russell strongly rejected the attribution on stylistic grounds (but without having seen the painting itself); she also pointed out that in the 1630s and 1640s Swanevelt was far too busy to make copies after a painting that was itself a copy of one of his own works.18

Instead, Sue Russell suggested Jan Asselijn (c. 1610/15–52) or Jan Miel (c. 1599–1664) for DPG174, but neither is convincing. It would be interesting if DPG174 was indeed an answer by Swanevelt himself to Claude’s Louvre painting, but the specialists are surely correct about the difference in style in both the townscape and the figures. The small group of cardplayers bottom right is remarkably close to the figures in the Barber Scene in Göttingen by Andries Both, datable between 1635 and 1641 (Related works, no. 7) [3]. Denning in 1858 also suggested, among others, Andries Both as the painter of the figures. 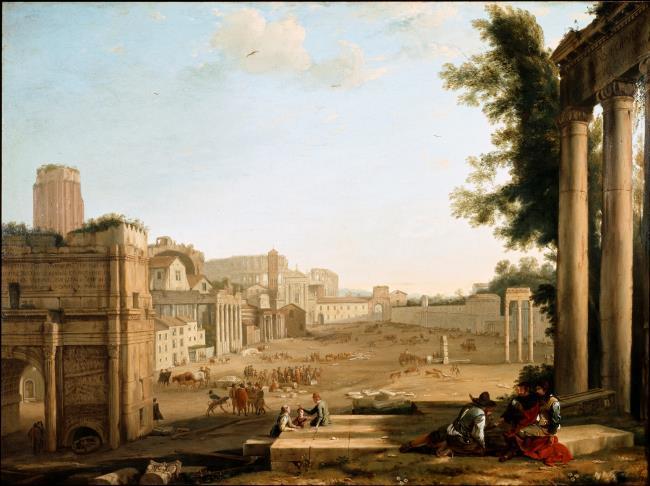 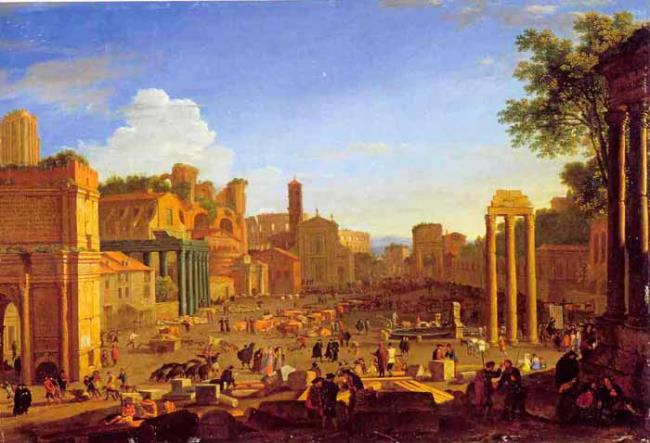 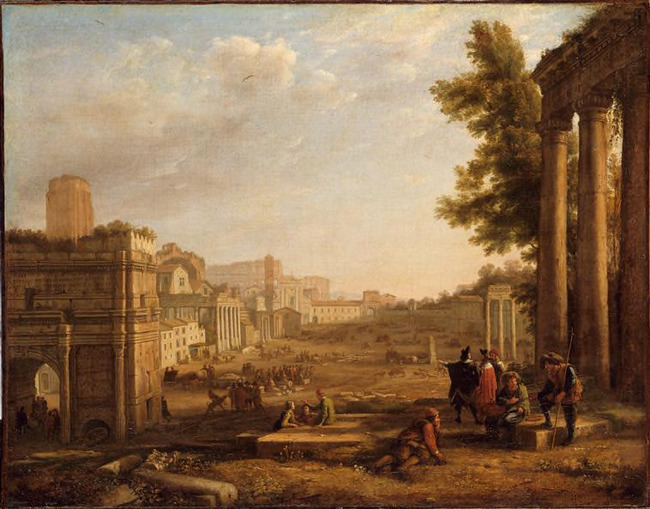 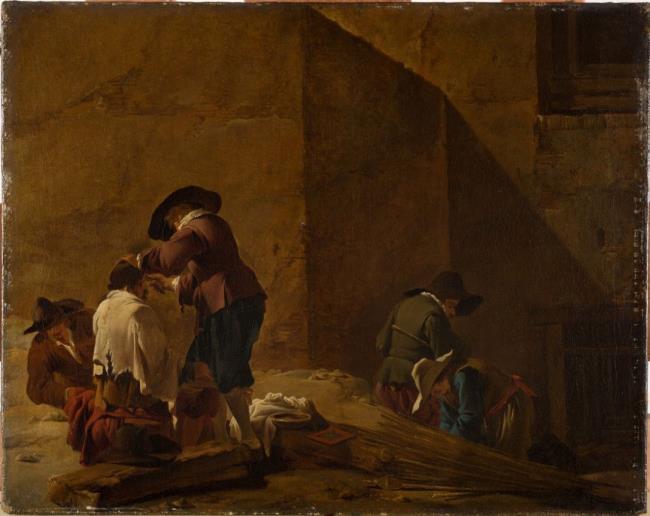 1 In GPID (3 Aug. 2012) the search for ‘Campo Vaccino’ yielded 153 hits, among them the Swanevelt in Cambridge and the Claude in the Louvre (Related works, Nos 1 and 2). The only painting that could possibly be DPG174 is lot 67 in the sale of Charles Joseph, Count of Lichtervelde, Christie’s, 30 May 1801 (Lugt 6276): by Claude Lorrain and Jan Miel, ‘A View of the Campo Vaccino, a clear, beautiful and elegant Picture, richly coloured, the Figures well disposed and exquisitely painted by Jean Miel’, which was bought by ‘Morris’ for £105.5. The price shows that it was not considered to be a real Claude. However no measurements are given, so the provenance of the Dulwich picture remains unknown.

2 ‘[…] one of a very rare kind for Claude). It is full of figures, and represents the Campo Vaccino, at Rome.’

3 ‘The figures in this picture were most probably painted by the hands of Jan Miel, Filippo Lauri, or Courtois. A. Both sometimes also assisted him. The drawing of this picture is to be found in the Liber Veritatis, Vol: I no. 10 [wrong number, due to the printmaker, Earlom: see Roethlisberger 1961, i, p. 110] […] it was painted for Monsieur de Béthune […] Cf: Musée de France. Vol: VI pl. 430, where a plate is given of the duplicate which was in the Musée Napoleon & a long description of the locality. The figures are there said to have been painted by Jan Miel. That [‘copy’ deleted] was in the possession of M. Blondel de Gagny, M. Poullain &c.’

4 ‘A somewhat doubtful picture. The same subject, but a smaller picture was in the Poullain Collection, and was engraved by Martini.’

5 ‘Formerly ascribed to Claude le Lorrain. The special interest of this picture is that it gives an exact aspect of the Forum Romanum during the seventeenth and preceding century.’

12 According to Roethlisberger (1961, i, p. 114, LV 9, no. 2) this is a ‘Rather poor smaller copy of the copy at Dulwich, to which it corresponds exactly’. However looking at the rather poor photograph on the Dublin website (http://onlinecollection.nationalgallery.ie/search/Claude%2520Campo%2520vaccino (July 14, 2017) it looks very much like a copy of the Claude picture in the Louvre: the group in the right-hand corner is like the one in the Louvre and not like the group in the Dulwich picture. Roethlisberger mentions on the same page three more copies.

14 Although a note of 5 Aug. 1939 in the DPG174 file records the remark of G. Oprescu, professor at the University of Bucarest, that DPG174 was painted by Agostino Tassi, ‘Master of Claude’.