DPG1 – A Garland of Putti

TECHNICAL NOTES
The support of this painting is fine plain-weave linen canvas, lined onto medium coarse similar; residue of the glue used in the lining process is very thick on the reverse, and the lining is split along the bottom. This picture bears much overpaint and there are a number of old (mended) tears. Previous recorded treatment: 1911, relined, Holder; 1952–5, conserved, Dr Hell.

DPG1 was painted by a professional, but it is not close enough to the work of Rubens to attribute the picture to him, or to any of his known pupils. It is likely to be a design after or for a ceiling. There are however many similarities to the work of Rubens. There is a similar configuration of babies in The Exchange of the Princesses at the Spanish Border by Rubens, part of the Medici cycle formerly in the Palais du Luxembourg, now in the Louvre (Related works, no. 1a) [1], as was already noted by Denning in his 1858 manuscript catalogue. The question is whether the maker of DPG1 worked directly after the Rubens painting or after a print made in the same direction.15 There are two differences: the putto with arch and bow in DPG1 is a deity holding a cornucopia in the Medici painting; and in DPG1 the putti form a vertical oval, whereas in the Medici painting the oval is horizontal. Rubens used groups of cherubs (Christian) or putti (mythological) several times in different contexts, where they seem to have become a decorative festoon or garland consisting of babies.16

When Rubens was in Italy he was interested in the decorative effect of groups of small children, as appears in his drawing of c. 1600–1603 (Related works, no. 1b) after a fresco by Pordenone (1483/4–1539) of God the Father with angels, formerly in the Annunciation Chapel in the Duomo in Treviso (1520; destroyed in 1944). Hans Vlieghe saw a similarity between the putti in DPG1 and the circle of cherubs in Rubens’s cartoon for the tapestry of The Triumph of Divine Love, part of the Eucharist series, now in Sarasota (c. 1625; Related works, no. 1c).17 The putti in The Rape of Orizia by Boreas (c. 1615) are also close in style, depicted in a mythological context and not in a garland (Related works, no. 1d). Two fragments of an Immaculate Conception in the Rubenshuis in Antwerp (early 1620s) have cherubs very similar to those in DPG1 (Related works, nos 1e–f). As often with Rubens’s designs the motifs get different meanings: (allegorical) putti are made into (Christian) cherubs and vice versa. The catalogue of the Calonne sale (London 1795) – at least Buchanan’s version of it – saw a connection with Rubens’s work for the Banqueting House in London, but the babies there are very different in form and detail.

A possible maker is the Flemish artist Hendrik Abbé (1639–after 1677),18 because DPG1 bears some resemblance to a monogrammed drawing in the Albertina, Vienna, dated 1677: there a group of babies are holding hands, flying around the Holy Spirit in the form of a dove (Related works, no. 3a) [2]. That drawing was published by De Maere & Wabbes as Project for a fresco, but it could equally well be a design for a print. If Abbé is the artist, DPG1 cannot have been painted before 1660, as he was baptised in Antwerp on 28 February 1639. There are two drawings that are called Abbé, both in Vienna. No paintings by him are known, which makes it difficult to attribute DPG1 to him. He was probably not the artist Habé who was also a collector and dealer in Rubens’s drawings in Italy.19 A drawing that is annotated Habé allievo di Vandyke (Habé, pupil of Van Dyck) seems to have been made by a completely different master (Related works, no. 3b). Hendrik Abbé was too young to have been a pupil of Van Dyck (or Rubens), as he was only two years old when Van Dyck died in 1641. 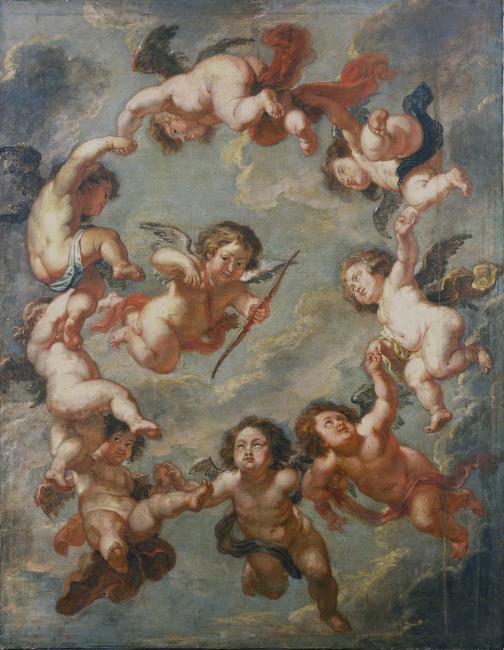 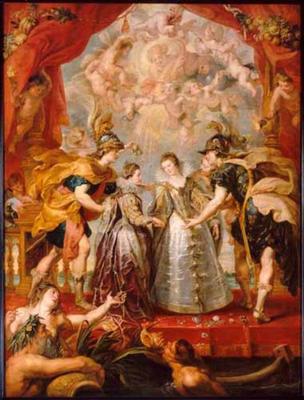 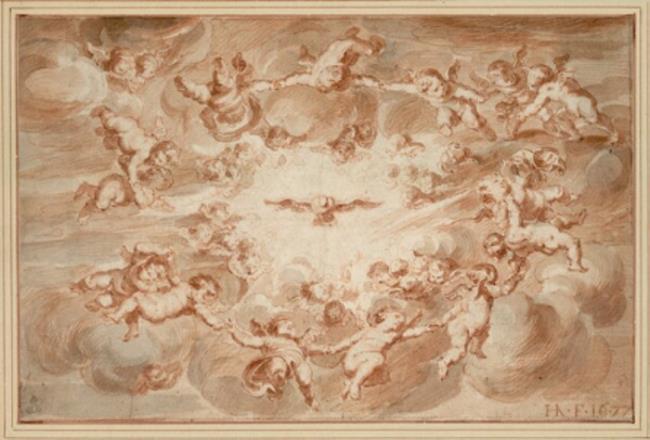 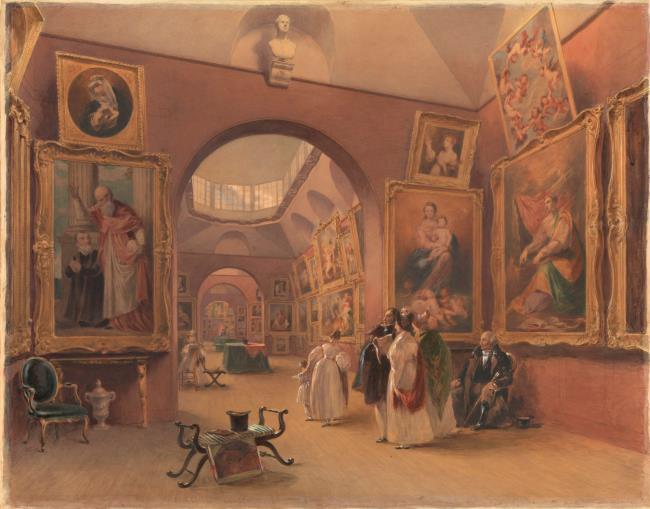 1 Warner 1881, p. 211, where a transcription is given of an account by Desenfans (a list of six pictures), the first of which might be DPG1 (Dulwich College Archive, MS XVI, fol. 5): Mr. Bourgeois a achetté pour moi de Mr. Donjeu les tableaux suivans que je peux lui renvoyer en aucun tems à la perte de cinq pour cent a savoir: des Anges par Rubens £50–0–0. (Mr. Bourgeois has purchased for me from Mr. Donjeu the following paintings, which I can return to him at a loss of 5 per cent, i.e.: Angels by Rubens, £50–0–0). Denning 1859 (see below, note 4) is the first to mention Donjeu[x], but since no dimensions are given the provenance of DPG1 remains uncertain. It first appears with certainty in Britton’s inventory of the Bourgeois collection made in 1813. In the GPID (28 July 2011) the provenance starts in 1811, with the Bourgeois Bequest.

2 ‘Sir Peter Paul Rubens. A group of Nine Cupids, or cherubim, in a circle.’

3 ‘Design for a ceiling. The design may be by Rubens; of his pencil there is here no trace whatever.’

16 Rubens even added babies to the content of cornucopias: McGrath 1977.

18 Flemish painter, sculptor, engraver, and designer of religious objects, born in Antwerp. In 1670 he published engravings, and in 1671 he is mentioned as designer of a candelabrum for the Cathedral of SS. Michel-et-Gudule in Brussels. It is likely that he is the Abbé who became a member of the Brussels Guild on 13 July 1676. He was active as a graphic artist in 1677, when he illustrated Ovid’s Metamorphoses. In the same year he made the drawing on which the attribution to him of DPG1 is based. It is not clear where and when he died. See Duverger 1992; De Maere & Wabbes 1994, i, p. 25, ii, p. 9.